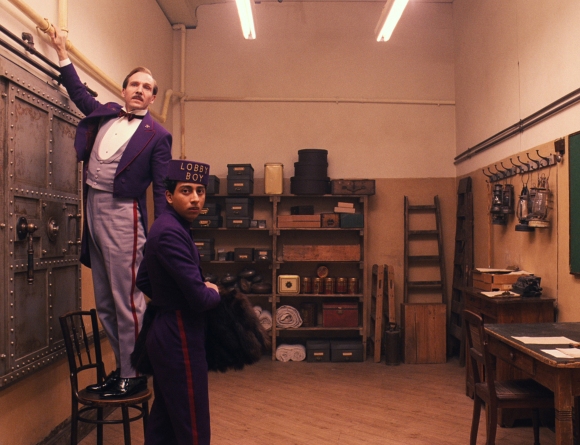 With director Wes Anderson, you either “get him” and his oddball characters, quirky plots and distinctive, whimsical visual style, or you don’t. A whole lot of people do, however, in his movies including The Fantastic Mr. Fox, Moonrise Kingdom and The Royal Tenenbaums. 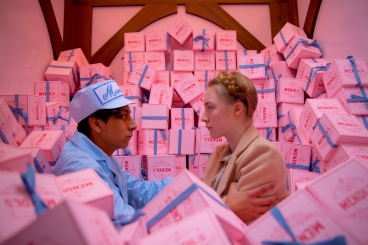 A wild romp set in a 1930s Eastern European mountain resort, it features a colorful assortment of players and a story within a story within a story that keeps burrowing deeper into its own silly seriousness. As with most Anderson projects, he works with cavernous open spaces as well as delicate, meticulously detailed miniatures.

His sights, like scenes carefully colored with pastel crayons from a storybook, are often sumptuous, and his actors move, and speak, with a clockwork cadence that adds to the sense of comedic orchestration.

The plot unfolds backwards, as unspooled by the owner of the hotel (F. Murray Abraham) to one of its guests (Jude Law), relating his beginnings as the establishment’s bellboy, Zero (played by newcomer Tony Revolori in his first starring role). Zero and his mentor, the hotel’s longtime, ladies-man concierge, the ultra-dapper Monsieur Gustave (Ralph Feinnes), become friends and co-conspirators in a spiraling, sprawling misadventure that includes a murder, a missing will, a purloined painting, an outlandish prison break, and the outbreak of something that resembles World War II. 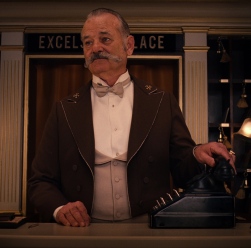 Everyone seems to be having a big old time in the big old hotel, and everywhere else, and several scenes are real hoots, like the scampering prison escape—which feels like a live-action re-enactment of something from the stop-motion animation antics of The Fantastic Mr. Fox—and an extended sequence in which a secret cadre of other concierges drop everything to help one of their own out of a jam.

The story is based on a book by little-remembered Austrian novelist and playwright Stefan Sweig, who was actually one of Europe’s most popular writers of the 1920s and ’30s. Anderson gives Sweig an “inspired by” credit at the end of the film.

Anderson’s detractors often think his movies are contrived, pretentious, gimmicky, too indy/arty or simply not nearly as funny as Mr. Anderson must think they are. OK, fair enough. But if you’re looking for a kooky, slightly off-kilter stopover in a place that can offer you an exhilarating, completely unique experience like nothing else at the multiplex, then I recommend you check in for a couple of free-wheeling hours—at The Grand Budapest Hotel.

2 thoughts on “A Great Escape”