One of the premier glamour photographers of the ’80s, Casilli started out at Playboy and ended up shooting covers for TV Guide, where he made almost all the stars of the times shine in all their big-haired, shoulder-padded, rainbow-colored glory. This collection of his work, which includes full-page portraits of Joan Collins, David Hasselhoff, Morgan Fairchild, Suzanne Somers, Brooke Shields, Vanna White, The Bee Gees, the casts of Dynasty, Dallas, Miami Vice and  Knight Rider, and dozens of other celebrities, captures the rich, extravagant, enviable beauty of the era’s most elegant pop-cultural ambassadors.

A monumental tribute to all three ‘Godfather’ movies 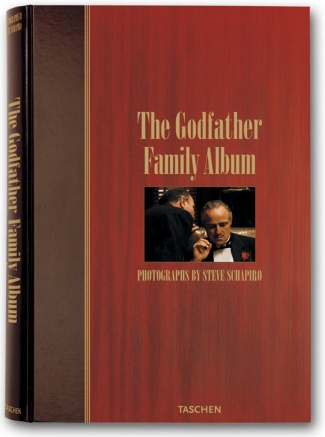 Here’s an offer you can’t refuse: When it was first released, this lavish compendium of some 400 behind-the-scenes, on-the-set photos from all three Godfather movies came with a collector’s-only price tag of $700. Now much more affordably priced, this monumental tribute to moviedom’s most iconic crime trilogy covers the cinematic Corleone crime saga from beginning to end and makes a perfect addition to any wiseguy’s library. Leave the gun, take the cannoli…and get this book.

Country stars take a walk on the spiritual side 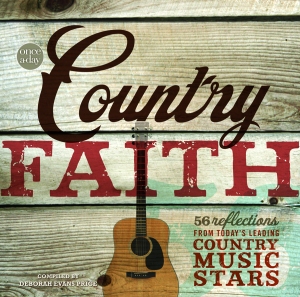 Country music has always walked on both sides of the line dividing the sacred and the secular, and this collection—with a host of country acts each expounding on a favorite Bible verse—digs deep into the format’s deep spiritual roots. As Carrie Underwood, Brad Paisley, The Band Perry, Florida Georgia Line, Hunter Hayes, Lee Greewood, Trisha Yearwood, Alan Jackson, Barbara Mandrell and more than 45 other superstars, veteran performers and hot newcomers each explain why one particular passage from the Old or New Testament has proven to be especially relevant to their lives and careers, you’re immersed in a uniquely all-star Nashville devotional—and might even come to see some well-known stars in a new heavenly light.

When Brooklyn meat delivery-truck driver David Wozniak (Vince Vaughn) discovers that anonymous sperm donations he made to a fertility clinic some decades ago have resulted in more than 500 now-adult children, he decides to check them out. Not all of them—just the 142 New Yorkers who are suing to find out the true identity of their dad.

So the deliveryman who’s sewn his seeds over the Big Apple goes off to see how they’ve sprouted—without letting any of them know who he really is. 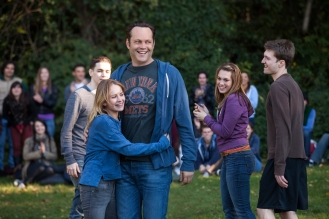 This remake—by the same director—of a 2011 French-Canadian flick called Starbuck (after a champion stud breeding bull) follows Wozniak as he interacts with his offspring. He encourages the street musician, cheers for the historical reenactor, gets a manicure from the salon worker, and subs for the barista at a coffee shop so the aspiring actor can skip work and go to an audition.

He even saves the heroin addict from an overdose.

There’s also a subplot about how Wozniak’s latest get-rich scheme has resulted in a massive debt to some sleazy loan sharks, and about his girlfriend (Cobie Smulders of How I Met Your Mother), who’s pregnant with his baby but not really expecting her screw-up of a partner to be much of a co-parent.

Can “Starbuck” turn his life around and become the man he needs to be—and the father he already is, 500 times over?

Vaughn, whose acting career has generally been defined by playing slouchy, raunchy man-child slackers, takes a decided turn toward the warm and fuzzy here, but still retains enough of his trademark comedic brand to not totally surprise anyone expecting to see a “Vince Vaughn movie.” It’s Chris Pratt, however, a supporting player on TV’s Parks and Recreation, who snatches most of the laughs right out from under him as his best friend and lawyer buddy.

Chris Pratt, from TV’s ‘Parks and Recreation,’ gets most of the laughs as Vaughn’s best buddy and lawyer.

There’s something creepy about a grown man sneaking around, spying on dozens of barely 20-somethings, sneakily tweaking their lives. There’s something implausible about just how swell, well adjusted and full of sunshine all these kids are, even the heroin addict. And the scenes in which Vaughn interacts with his severely disabled son (Sébastien René, reprising his role from the original movie), meant to show Wozniak’s love for all his kids, instead come off as manipulative and mawkish.

Ultimately, this tall tale of a fantastically fertile lug and his epic leap into the nether-reaches of fatherhood has a message about family, connectivity and belonging that wraps around its comic center like one giant group hug. But Delivery Man makes you slog down a long road of soppy, artificially sweet goop to get to it.

A skyscraper of a book itself, this super-tall 9”x18” volume mirrors its subjects: the world’s tallest buildings. With oversize, full-color photos, specs and a history of awe-inspiring vertical masterpieces all around the globe—including such iconic American landmarks as the Empire State Building, the Chrysler Building and the Willis (formerly Sear) Tower, plus an array of newer creations in Europe, China, the Middle East and India—it’s an inspiring, eye-popping, soaring architectural tour, one that might just leave you feeling a little bit light-headed.

Bruce Willis returns in the role of retired black-ops CIA agent Frank Moses, who must once again re-assemble his somewhat old-school team (John Malkovich, Helen Mirren) to thwart a new international threat in this second installment of the “geri-action” (geriatric + action) formula that proved itself so successful the first time around. Anthony Hopkins, Catherine Zeta-Jones and Mary-Louise Parker round out the cast, and Blu-ray bonus features include gags, goofs and an in-depth, behind-the-scenes look at the film’s characters, boom-boom weaponry, espionage gadgetry and extreme stunts.

On Air—Live At The BBC Volume 2

An all-new companion to the Grammy-nominated, multi-platinum-selling 1994 Live At The BBC, this treasure trove features 63 live tracks recorded by the Fab Four for a variety of radio programs on the BBC in the early to mid 1960s. The eclectic mix includes 37 previously unreleased musical performances and more than 20 snippets of never released studio banter, revealing the band’s youthful high spirits and also the great breadth of their early musical influences, with covers of Chuck Berry’s “I’m Talking About You,” Little Richard’s “Lucille,” Ray Charles’ “I’ve Got a Woman,” and Chan Romero’s “The Hippy Hippy Shake.” And, of course, there are spunky run-throughs of 30 now-familiar Beatles classics, including “I Saw Her Standing There,” “Twist And Shout,” “Please Mister Postman” and “Money,” plus a 48-page booklet. 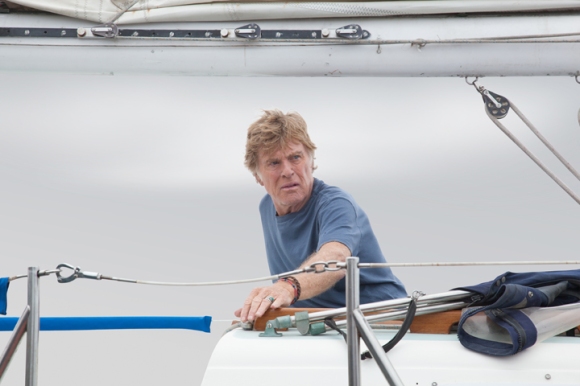 “I must go down to the seas again,” wrote British poet John Masefield in the early 1900s, rhapsodizing the “wind’s song and the white sail shaking.”

Robert Redford’s character in All Is Lost probably read that classic maritime poem, once upon a time. But we wouldn’t know. In fact, we don’t know much anything about him at all, including his name, where’s he’s from, or why he’s alone on a sailboat, headed across the Indian Ocean, 1,700 miles from land.

All we know is that, in opening narration over a scene of lapping waves, he informs us (in words that sound like he’s reading his farewell note) that he’s “tried everything” and “all is lost.”

Then the story flashes back so we can watch his dire predicament unfold from the beginning. Awakened from a nap by water lapping on the floor of the cabin of his boat, he realizes his vessel’s been struck—its side pierced—by the jagged edge of a floating metal cargo container. Suddenly, his little pleasure craft has become a mini-Titanic.

But “Our Man” (as he’s listed in the credits) doesn’t panic. He immediately springs into action, stoically, calmly going about the business of survival. Then he notices dark clouds on the horizon, and things go from bad to worse.

Redford, the only actor in the entire film, gives a monumental, majestic performance. It’s his show all the way, and a spectacular, galvanizing display of how this one-time Hollywood “golden boy,” now 77, can still commandeer the screen.

As he shimmies to the tippy-top of his ship’s mainmast to fix an unhooked wire, later gets swept overboard, and eventually has to abandon ship altogether into an inflatable lifeboat, his age-defying athleticism is amazing. And through it all, he’s a man of few words—almost none at all.

Director/writer J.C. Chandor, whose only other film was Margin Call (2011), working with cinematographers Frank G. DeMarco and Peter Zuccarini, and three-time Oscar-winning sound editor Richard Hymns, creates a dynamic, driving existential narrative with only the slightest smidgen of dialogue. You realize just how unnecessary, impractical, and downright useless words can be in situations, like this one, when there’s no one to speak them to.

(You also realize just how yappy with blabber most other movies can be.)

Will Our Man endure? Can he make it into the international shipping lanes, where a passing freighter may—or may not—spot him? Will he hang on to the will to live…or will that, too, sink beneath the waves? And what about those circling sharks?

I’m not telling. But I can tell you one thing: After watching All Is Lost, with all due respect to the British poet, I think I’ll pass on “going down to the seas again,” at least for a while, and I certainly won’t be going all alone in a sailboat. 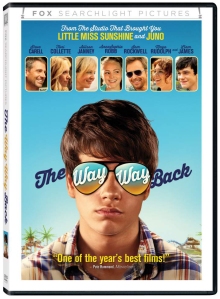 The Way Way Back

A sunny, sparkling summer coming-of-age comedy now released as part of the Fox Home Entertainment Holiday Collection, this tale of a miserable 14-year-old teen, Duncan (Liam James), dragged away on a family vacation with his mom (Toni Collette) and her oppressive boyfriend (Steve Carell), won over indie audiences before finding broader success with more mainstream crowds earlier this year. Things start looking up for Duncan, however, when he meets a cute girl next door (AnnaSophia Robb) and lands a gig at the local water park, where he meets a cool-cat mentor older friend (Sam Rockwell) who helps him navigate the challenges of life, love, family and friendship. Bonus features include several making-of and behind-the-scenes features.

The invention of flexible film (as opposed to solid plates) in the late 1800s sparked a revolution in devices that could take “panoramic” photos. Before long, it seemed, just about everyone—and every kind of group—was hiring a photographer with one of the newfangled cameras, some of which could take a single image encompassing a full 360 degrees. These delightful reproductions from the collection of Sapan (the CEO of the company that operates the American Movie Channel, the Independent Film Channel and the Sundance Channel)—of circus performers, rodeo cowboys and Indians, football and baseball teams, church groups, Ku Klux Klan members, college students, beachgoers, firemen and policeman, tradesmen, bathing beauties, soldiers and more—offer a wildly diverse cross-section of early 20th century America, in all its wonderful, wide-angle splendor.