Berg was, indeed, one of the most prolific, most popular illustrators in the history of MAD Magazine—his contributions ran in almost every issue from 1957 until his death in 2002. This comprehensive coffee-table collection brings together not only his wide-ranging “The Lighter Side Of…” strips, which lampooned a spectrum of mid-20 century American life in all it marvelous messiness, but also dozens of his lesser-known earlier cartoons, and his later satirical jabs at big business, computers, religion, the controversy over guns and other modern-day topics.

By season four, his nerd-next-door was the star of ‘Family Matters’ 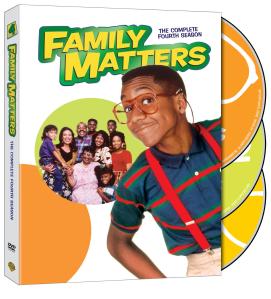 Part of ABC-TV’s Friday-night lineup for nine seasons between 1989 and 1998, this hit comedy series revolved around a suburban Chicago family and their nerdy next-door neighbor, Steve Urkel (Jaleel White), who became the most popular character on the show. In this three-disc roundup of all 24 episodes from 1992-93, Urkel gets an accordion-playing girlfriend, takes driving lessons, competes on TV’s American Gladiators, camps out on a rooftop to woo a sweetie, has a superglue mishap and performs an accidental striptease, among other sitcom hijinks.

The New York depicted by photographer Tod Seelie in his first book isn’t one you’ll find in any Chamber of Commerce brochures. It’s an underground nighttime swirl of a gritty subculture made up of characters on the fringes, people who don’t come to life until everyone else has gone to sleep. His starkly beautiful, sometimes shocking images of punk musicians, performance artists, bizarro breakouts of who knows what, decrepit buildings and streets that most “daytime” people would never walk have a hypnotic allure that reveal explosively colorful sides to the core of the Big Apple that most visitors (and indeed, many residents) never see.

Blowin’ in the Wind

The Coens’ tragi-comic odyssey of broken dreams and bitter truths

“Hang me, oh, hang me,” sings Llewyn Davis (Oscar Isaac) in the mesmerizing performance that opens filmmaking brothers Joel and Ethan Coens’ ode to the New York’s Greenwich Village folk music scene of the early 1960s. Llewyn (pronounced Loo-en) doesn’t just sing the song, he inhabits it, picking his guitar and spinning its tale of a weary traveler defeated by his own misdeeds, finally surrendering to the noose and the cold, cold ground.

The bleak song sets the stage for the story that’s about to unfold—like a folk song—as we spend a week in the life of Llewyn, a young journeyman singer walking the razor’s edge between the glow of success and the gloom of failure.

There have been many movies about music and musicians, but the Coens—among the most unconventional of commercially successful filmmakers—take a characteristically unconventional path here: Their protagonist is not very likeable, nor very sympathetic, and his messy, meandering story is a tragi-comic odyssey of broken dreams, bashed hopes and bitter truths.

But we feel for him nonetheless, and Inside Llewyn Davis is another Coen Brothers gem. While not as boisterously gonzo as The Big Lebowski, as fabulously tangled as Fargo or as much of a toe-tapping toot as O Brother, Where Art Thou, it’s still cool, clever, cynical and achingly funny, meticulously crafted and marvelously quirky. And you don’t know where it’s going until it gets there—which, as it turns out, is right back where it started. 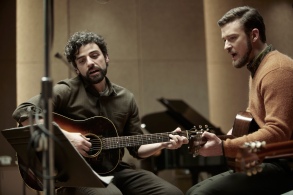 The soundtrack is outstanding, a slate of mostly traditional folk chestnuts given respectful new spins by producer T Bone Burnett, some stellar backing musicians and the cast. Isaac, the relative unknown who plays Llewyn, is phenomenal, doing his own singing and guitar playing live (instead of overdubbing or performing to prerecorded tracks). Pop superstar Justin Timberlake, who plays another folk singer, Jim, does likewise, as does Carey Mulligan, who portrays Jim’s wife and musical partner, Jean.

There’s John Goodman, a Coen mainstay, cropping up as an overfed, overdosed jazz musician. There’s the tabby cat that Llewyn spends much of movie lugging around, trying to find, or catch. There’s the novelty tune that Llewyn records with Jim and another singer (Adam Driver) that becomes one of the movie’s humorous high points.

And there’s a certain other folk singer from Minnesota, the Coen’s home state, waiting in the wings to blow everything—and everyone else—away, in the wind. As Llewyn seems to know, the times they are indeed a-changin’.

Inside Llewyn Davis may not blow a lot of its competition away at the box office—like some other Coens’ fare, it could be a bit of an acquired taste. But for anyone who can feel its genuine grasp of its subjects, its music and its times in its deep, dig-it grooves, this cinematic sonnet to a struggling ’60s singer might just become a greatest hit.

Hallowed ground to serious sports fans, stadiums are shrines of near-mythical proportion where legends and legacies are forged. Giving this handsome roundup of 130 major football coliseums—including all 32 current NFL stadiums, 77 college stadiums, and 35 other famous or now-demolished bowls or fields, all accompanied by photos, factoids and historical tidbits—to any pigskin buff is guaranteed to score you some serious extra points.

Ever wonder what your grumpy old dog is thinking?

This whimsical picture book pairs photos of canines “of a certain age” with witty, crotchety captions that speculate what might very well be going through their mutty minds. Well, it might be, if dogs were as people-like as people wanted them to be. Examples: “Gus got Grecian Forumla in his eye.” “Frank is waiting for the prune juice to kick in.” “Chet is still upset they cancelled Matlock.” It’s guaranteed to put a big, speculative smile on every dog lover’s face—and offer a whole new perspective on what we’d like to think could be going on behind the furry muzzles, grey whiskers and big, old experienced eyes of almost any pooch for whom puppyhood is but a memory.

Rodgers, an Englishman whose lung power filled arenas for years as the lead singer for the bands Free and Bad Company, came stateside to record this collection of classic R&B and soul songs—in the very place, Memphis, Tenn., where they originally went down, and with the musicians who played on the original tracks in the 1960s and ’70s. As you’re grooving anew to Sam and Dave’s “Thank You,” The Temptations’ “It’s Growing,” Booker T. Jones’ “Born Under a Bad Sign,” Otis Redding’s “I’ve Got Dreams to Remember” and Rodgers’s other funkified forays into his musical past of American vinyl 45s, you can also feel good that all of the proceeds from the sales of The Royal Sessions go to local Memphis music education programs. (On sale Feb. 4.) 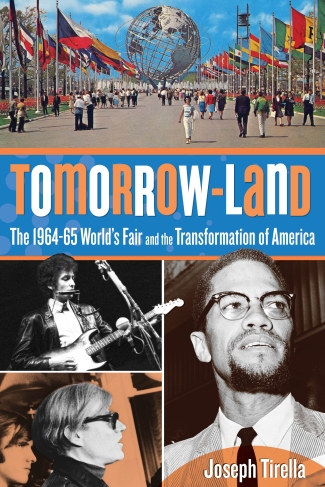 Released to coincide with the 50th anniversary of the 1964-65 New York World’s Fair, this top-notch narrative examines the roaring flashpoint of pop music, politics, Civil Rights, Vietnam, bohemian culture and other elements that made the event’s theme of “Peace Through Understanding” a tough one to follow through. With a sprawling cast, including The Beatles, Martin Luther King Jr., Andy Warhol, Lenny Bruce and the pope, Tirella’s examination of the World’s Fair becomes a prism through which a much bigger picture of a turbulent America emerges, in all its messy, splattered Sixties colors. 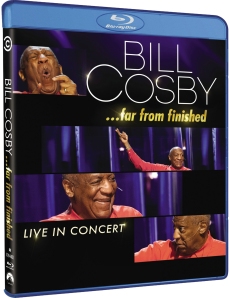 The legendary funnyman, 76, returns to the TV stage for his first comedy special in almost 30 years, riffing in front of a live audience in his easygoing, storytelling way on love, marriage, family, kids and the little speed bumps he’s encountered on the road of life—and making it all sound hilarious. Directed with cinematic smoothness by Hollywood actor-director-producer Robert Townsend, it’s a laugh-filled 90 minutes with an old friend, whose rubbery, riotous facial expressions make the words coming out of his mouth even funnier. Bonus features include an interview with Cosby, a behind-the-scenes look at the taping, and comments from fans. 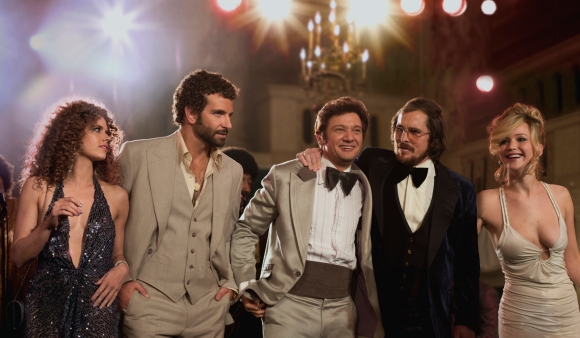 “Some of this actually happened,” a placard playfully informs us at the beginning of American Hustle, director David O. Russell’s swirling, swinging tale of a pair of con artists in testy, zesty cahoots with an FBI agent to catch even bigger prey in the 1970s. It’s loosely based on the FBI’s real-life ABSCAM sting of the era, which ensnared several high-ranking politicians in a bribery and corruption investigation.

Christian Bale plays Irving Rosenfeld, a small-time Bronx con artist who’s made out pretty well in forged art and bogus loans. But his graft really kicks into high gear when he hooks up with Sidney (Amy Adams), a former stripper who sees a way to broaden their scams—and pave the way to a much bigger, richer life for them both.

But hold on: Irving’s a married man, and his wife (Jennifer Lawrence) is a real suburban scrapper.

Richie DiMaso (Bradley Cooper) is the hyper-adrenalized FBI agent eager to make his bones who brings down both Irving and Sidney, then uses them to make an even bigger sting, an elaborate affair that eventually includes a fake sheik (Michael Peña), a New Jersey mayor (Jeremy Renner), a slew of politicians and the mafia.

The movie is a deep, delicious dish of late-’70s detail, from the music to the clothes to the hair—and oh, the hair! Bale’s character sports one of the most outrageous comb-overs in the history of cinema, and agent DiMaso reveals that his teeny curls don’t come easy (or natural).

Bale is always fascinating to watch as he burrows into a role, but Adams and Lawrence bring the heat that makes this sexy story sizzle. And Russell (Silver Linings Playbook, The Fighter) juggles his ensemble of complicated, conflicted characters with an orchestral touch that often recalls the mastery of maestro Martin Scorsese—especially in a Goodfellas-esque casino scene with a gaggle of Las Vegas mobsters….and a very special surprise cameo.

It’s all hip, humorous, sad, edgy and immensely entertaining, this sprawling period parable about a group of gaudy, needy, greedy people who aren’t who they purport themselves to be—people with fake tans, fake nails, fake hair, fake lives, people who aren’t “real,” who are always conning somebody, everybody, each other, even themselves.

As Irving says, there’s “a lot of grey” in the muddled middle ground between good and bad, right and wrong, between the forger and the artist, in a world where it seems that everyone’s on the make, on the take, on the hustle, on the scam. Especially when, as Lawrence’s character says, all you’ve been dealt in life are “poisonous choices.”

When that happens, as Russell’s outstanding American Hustle suggests, all any of us might do is whatever it takes to survive.