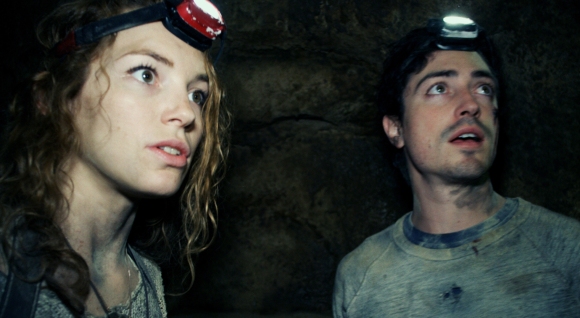 As Above, So Below

If young actors ever stop filming themselves going into creepy places, Hollywood’s going to be in a real pickle—filmmakers will have to come up with some other premise for movies like this one, in which yet another batch of 20-somethings go exploring somewhere goose-bumpy, “documenting” the whole thing from the get-go.

This “found footage” technique started back in 1999 with The Blair Witch Project and spawned an entire sub-genre of horror-movie filmmaking, wherein the video that the characters make is later “discovered” and becomes the movie itself.

In As Above, So Below, British actress Perdita Weeks plays Scarlett, a spunky, sexy young history buff-archeologist-adventurer-truth-seeker looking for the Philosopher’s Stone, an ancient fabled object supposedly endowed with magical and mystical properties, including the power to heal and turn objects into gold.

All signs point Scarlett, her clue-deciphering friend George (Ben Feldman, who plays Michael Ginsberg on Mad Men), and their tag-along documentary filmmaker, Benji (Edwin Hodge), to the catacombs underneath Paris, the labyrinth of tunnels where some six million bodies have been interred for centuries. Linking up with a trio of cocky, graffiti-tagging French spelunkers, they dig in.

If you’re looking for good scares, you’ll have to wait a while; it takes a while to get going in the shock-o-rama department, and starts out much more in Indiana Jones/Tomb Raider mode. For the first hour or so, it’s all blah-blah and buildup, which adds a bit to the creep-out factor but will disappoint anyone expecting something scarier.

The explorers have to crawl through a narrow passageway full of bones; Benji freaks out and gets stuck. Then they find out they’ve been going in circles. They come across a room full of topless chanting women—ooh la la! And when the real “jolts” start coming, they somehow don’t seem to alarm anyone nearly as much as you’d think they would, especially when things take a decidedly weird, paranormal turn. 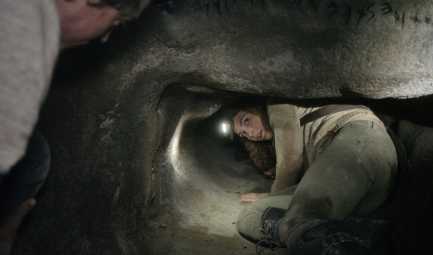 The plot meanders, like the characters, who spend the majority of the movie lost, wandering, scooting, squirming, slithering, sliding, crawling, running, splashing, or thrashing around in the semi-darkness, rappelling up and down holes, and peeking, panting and peering around corners. It’s almost feels like they’re looking for not only the Philosopher’s Stone, but also a basic storyline, much like the audience.

Things eventually turn violent and bloody, and even more confusing. At the end of it all, it’s a hopelessly tangled, shaky-cam knot of “gotcha!” haunted-house images, loopy, incomprehensible mumbo-jumbo and bargain-basement recycled ideas from other movies. As Above, So Below is reportedly the first movie ever given permission to film in off-limits parts of the Paris catacombs, the largest cemetery in the world. Too bad it comes out such a super-sized subterranean mess.

From the pages and archives of LOOK magazine, a publication that defined the Fifties in images and words, comes this handsome photographic celebration of the complicated, often contradictory era that transformed America’s identity through an unprecedented confluence of socio-economics, culture and politics at the end of World War II. With 200 color and black and white photos, it’s a chronological museum of memories charting the ups and downs of a nation as it finds its way through the often mixed signals of Ozzie and Harriet and I Love Lucy, John F. Kennedy, James Dean, Disneyland, suburban prosperity, urban slums and other touchstones from an era that wasn’t quite as simple as it might seem.

Come Fly With Me

Fly the friendly skies in this rip-roaring social history of America taking wing in the late 1950s and early ’60s, as commercial airline travel became a commodity for “ordinary” people along with movie stars, moguls and glamorous, globetrotting trendsetters. Smart, sexy and full of dishy detail, it’s like a real-life Mad Men in the air, peopled with characters from all walks of history and pop culture, including eccentric millionaire Howard Hughes, hotel magnate Conrad Hilton, budget-travel icon Arthur Frommer, and dozens of others who helped create the irresistible allure of the “jet set.”

The Millers: The First Season

Divorced reporter Nathan Miller (Will Arnett) was looking forward to the single life with his co-worker/wingman (JB Smoove)—until his parents (Margo Martindale and Beau Bridges) totally botched up his plans. One of the hottest, funniest new comedies of last fall’s TV season—which also featured guest appearances from Roseanne Barr, Andy Richter, Jeffrey Tambor, Jerry Van Dyke and others—comes packaged with several bonus features, including a behind-the-scenes look at the production and a mock-serious interview with Arnett.

Examining the long tale of the hot dog wiener

Summer is the season for hot dogs, and so it’s perfect time to check out this book going deep into the world of the wiener, exploring just how those humble little links grew up to become such powerful icons of all-American culture. The author, a respected “hot dog scholar,” examines franks from one end to the other, looking at their history and lore, the places where they’re sold, the people who market them from stands and pushcarts, and the simple, mouth-stretching pleasures they’ve always promised. Rich with information as well as color photos, it also includes 25 pages of recipes and suggested toppings.

When The Game Stands Tall

As such, it’s not exactly an underdog tale: De La Salle’s Spartans were champions, kings, on top of the world in 2003. Instead, we see how they rebounded from a couple of major setbacks, including a tragedy involving one of their teammates, and what happened when they eventually encountered a team they couldn’t beat.

But still, it’s a bit hard to feel too sorry for a bunch of California teens at a well-off, suburban school that won every game they played for more than a decade.

So director Thomas Carter, in his adaptation of Neil Hayes’ 2004 book, focuses his attention on the team’s soft-spoken coach, Bob Ladouceur (Jim Caviezel) and his message to his players: Football isn’t just about football—it’s about unity, family and teamwork.

Coach Lad is also the school’s religion teacher, and he likes to toss Bible verses in with his tractor-tire workouts, blocking drills and tackle plays. The movie’s numerous other faith references and subtle sermonizing—most of it synched to sweeping, syrupy music to underscore the moment—will no doubt appease churchgoers.

Caviezel will be familiar to many viewers from his current starring role on TV’s Person of Interest, and many will also remember that he played Jesus in Mel Gibson’s bloody Passion of the Christ (2004). As Ladouceur, he’s also somewhat Christ-like, a pious figure who encourages his players to not “exalt” themselves.

Judging from the end-credit video clips, Caviezel plays his role very close to the low-key temperament of the real-life coach. But his performance is so pious and so low-key, it almost feels like he’s standing on the sidelines of the movie in which he’s supposed to be starring. Caviezel makes the coach seem he’s carved out of a big block of grim, sacred wood.

Laura Dern plays his wife, and Michael Chiklis is his assistant coach. Thank goodness both are around to bring some zing to the party. Clancy Brown plays an overbearing father of a star player, but the script almost pushes him into clichéd-villain territory.

The actual football scenes have the crunch and wallop of realism, thanks to veteran Hollywood sports stunt coordinator Allan Graf, cinematographer Michael Lohmann and a squad of college-player stand-ins.

But the movie struggles to find its dramatic center, or even a real message. It puts several ideas in play—the coach’s regrets, his newer players’ hubris, what it means to be “men”—without ever really following through on any of them. And what does the phrase “When the Game Stands Tall” mean, anyway? Instead, the film settles for a soft, mushy kind of feel-good uplift that moviegoers have seen many times before, more powerfully and more potently.

And in a movie about a game being about something supposedly more than football, it comes down to a yet another big finish in yet another a big game that lets you know that, hey, at least in Hollywood, it’s mostly still about football, after all.

Stallone & Co. are showing their age in third testosterone fest

In the opening scene of this slam-bang, testosterone-fest reunion of aging action-movie icons, Sylvester Stallone’s character points to a frankfurter-sized finger of his meaty fist and a skull-shaped glob of silver—his Expendables “lucky ring.”

The Expendables franchise, about a group of super-covert, battle-scarred warriors hired to do the U.S. government’s dirty work, has indeed been lucky for Stallone. He’s had both his bank account and his ego fed by the success of the previous two movies, which he also had a big hand in either directing or writing.

In the movies, his team is “expendable” because their work is so dangerous, and their missions so secret, no one knows—or can afford to care—if they live or die.

How ironic—since the Expendables don’t seem expendable at all. They just keep coming back, again and again, and Stallone and his co-stars are a veritable, tried-and-true Hollywood guy-movie who’s who. These are some “dependable” Expendables. 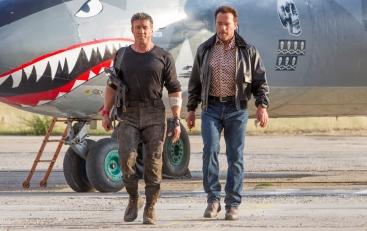 Mixed martial arts fighter-turned-actress Ronda Rousey is the only female invited to play in the boys-only sandbox.

There’s a wisp of a subplot about the old-school Expendables (with their knives and guns) vs. the new young high-tech Expendables (with their computers and cameras and drones). But now, four years and three movies into the franchise, the just-plain-old Expendables are beginning to wear visibly thin, the plots have ground down to near nothingness, the wisecracks aren’t wise or crack-y anymore, and the original stars mostly lumber around like middle-aged slabs of spa-toned beefcake. And this movie, in particular, is so bloated with actors, there’s not much space for any of them. Some, like martial arts champion Jet Li, are relegated to little more than a cameo.

When the first movie came out, in 2010, it was an homage to Hollywood’s long tradition of Dirty Dozen-style, action-caper, military-mission flicks, as well as an adrenaline shot of career-rejuvenating mojo for Stallone and some of his action-movie pals from the ’80s and ’90s. Now, as Neil Young’s “Old Man” plays and Stallone’s character proudly watches his young protégés carouse in a barroom, it seems like the original Expendable is thinking about finally easing out of the picture—or at least making much more room for a younger, leaner, greener set of espionage and counter-terrorism experts.

At one point, Trench (Schwarzenegger) tells Barney (Stallone) he’s through. “I’m getting out of this business,” he says, “and so should you.” Maybe it’s finally time for Stallone to take that Expendables advice to heart. 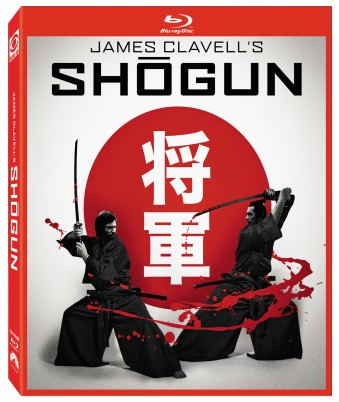 Now re-mastered in hi-def and released for the first time on Blu-ray, this award-winning TV three-part mini-series, based on the bestselling James Clavell novel, captivated viewers over five nights in 1980 with the exploits of a 17th century British navigator (Richard Chamberlain) shipwrecked off the coast of Japan and caught up in a deadly, epic struggle of love and war in the land of the rising sun. Almost two hours of bonus features include a 13-part making-of documentary, which detail the intricacies, controversies and complications of filming the entire production in Japan, and commentary by the director.