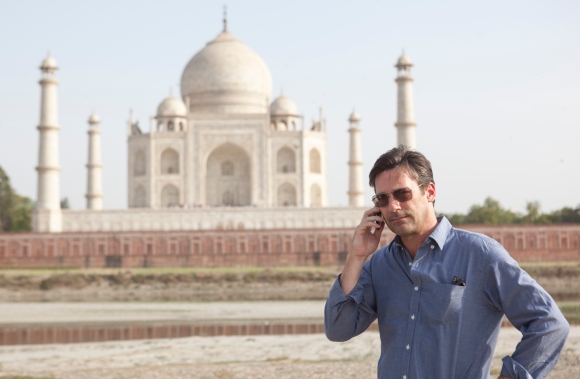 Based on a true story from 2008, Million Dollar Arm stars TV’s Mad Men leading man Jon Hamm as a struggling sports agent who goes scouting for baseball’s next pitching superstars in an unlikely part of the world.

After hopeful negotiations to rep a pro footballer (played by Cincinnati Bengals linebacker Rey Maualuga) fall through, Hamm’s character, J.B. Bernstein, and his business partner (Aasif Mandif) turn their sights to baseball, hoping to find a young, unknown, unsigned player. But where? All the international hot spots (Puerto Rico, the Dominican Republic, even China) have already been staked out and tapped.

In a flash of inspiration, J.B. sees a cricket match on TV and gets an idea: Go to India, a country where baseball is virtually unknown, find cricket “bowlers” who can pitch, and bring them back to America.

So he concocts a contest, called the Million Dollar Arm, and sets off to the other side of the globe to discover what he hopes will be the next ballpark sensations—and the ticket to keeping his small agency afloat.

Hamm is the star of this show, clearly, but Million Dollar Arm is also a movie about journeys, geographical as well as emotional. As J.B. adjusts to his new surroundings in India, we meet the two young men, Dinesh (Madhur Mittal, from Slumdog Millionaire) and Rinku (Suraj Sharma, the star of Life of Pi), that will eventually be chosen for a shot—a long one, at that—at baseball’s big leagues, and we come to understand their anxieties about leaving their families, their rural villages, and the only ways of life they’ve ever known.

J.B. is accompanied on his trip by a grumpy semi-retired American baseball scout (Alan Arkin, dialing in his usual comical crankiness), and he ultimately brings his new recruits home to learn fundamentals under the tutelage of a former MLB player now coaching college ball (Bill Paxton, portraying real-life USC coach Tom House with just the right dose of sunburn and seasoning). 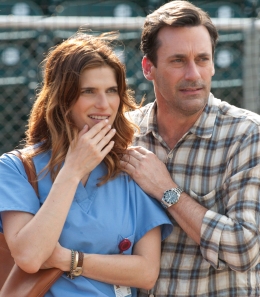 The Disney folks surely took some license, as moviemakers often do, but all of this really happened. To see just how closely the film paralleled the real characters, stay for the credits and the photos, video clips and other postscript highlights.

More cynical viewers might wish for a more cynical movie, a movie with more rough edges or tough breaks or dark corners. But for anyone who wants to bask in a ray of early summer sunshine, this uplifting, spirit-boosting tale of baseball, dreams, second chances and the grand, glorious game of life itself could be just the ticket.

One thought on “Here’s The Pitch”