If this movie were a recipe, its ingredient list would look pretty impressive.

Start with a highly praised debut novel, one especially loved by foodies for its taste-filled tale of a young Indian cook’s culinary journey across Europe. Stir in powerhouse producers Oprah Winfrey and Steven Spielberg, then Swedish director Lasse Hallström, whose 2000 film, Chocolat, made millions of moviegoers lust for something dark, warm and sweet.

Marinate in deep-dish countryside vistas and luscious scenes of French and Indian food, all potently presented by Oscar-winning cinematographer Linus Sandgren. Steep in a Bollywood soundtrack by Slumdog Millionaire musical composer A.R. Rahman. Garnish with a frisky starring role by the venerable Helen Mirren—Dame Helen Mirren, no less—and season with humor, heart and message about learning to get along.

Taking some liberty with the novel’s sweeping historical narrative, the movie nonetheless covers the basics: Uprooted by war, political turmoil and the death of his wife, Mumbai restaurateur “Papa” Kadam (Indian movie veteran Om Puri) and his children wander across Europe, eventually settling in the south of France.

Mirren plays Madame Mallory, the widowed proprietress of a tony upscale eatery renowned far and wide for its world-class, award-winning cuisine. Her prim, perfectionist world is rocked when the colorful immigrant clan of Kadams opens a competing, very different dining establishment directly across the street—just 100 feet away. 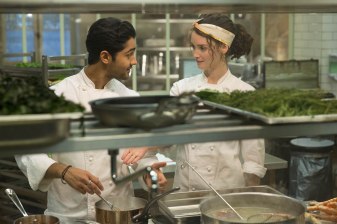 Things get even more complicated when Papa’s grown son, Hassan (Manish Dayal), begins showing an interest in learning how to cook something other than his spicy Indian family recipes—and also in Madame Mallory’s beautiful sous-chef in training, Marguerite (Charlotte Le Bon).

Hallström has some nice directorial flourishes, especially when it comes to making food a “character” in the story. But that’s not such good news for the actors, who must compete with all sorts of masterfully staged shots of immensely appealing dishes being discussed, made and consumed. Daval and Le Bon work valiantly to light a spark in their romantic subplot, but much of the heat that might have gone there seems to have been diverted to the stovetop.

Mirren and Puri likewise go through the moves of their characters discovering “something” that might be described as romance, but this overstuffed soufflé of a movie never finds room for them to ever do anything other than nibble around its edges. And none of the other characters—Hassan’s brothers and sisters, Madame Mallory’s other employees, a comically hapless mayor—are given much of anything to do, or even say.

Despite being a bit too long, more than a bit predictable and a whole lot of corny, The Hundred Foot Journey has a lot of heart, and like a platter of yummy things presented by a hostess who relentlessly pours on the charm, it eventually wears down your walls of resistance. A sumptuous-looking confection about decent people living decently, guided by their palettes and their hearts, drawing closer as they celebrate their differences, it will likely go down most smoothly with older audiences who love food and love movies with somewhat equal measure.