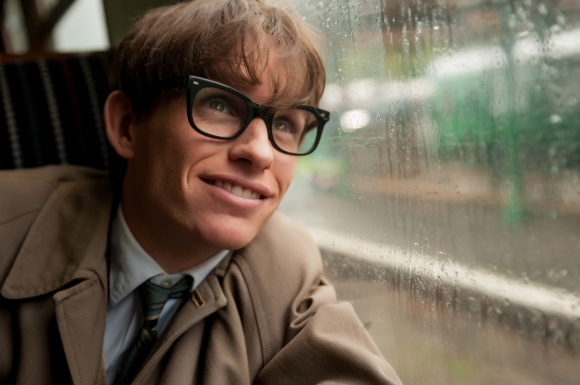 The Theory of Everything

You may have seen Eddie Redmayne as the young lovestruck movie production assistant who squires the famous Ms. Monroe around London in My Week With Marilyn, or as Marius, the noble rebel fighter who sings the lovely “Empty Tables at Empty Chairs” in Les Misèrables. Those were fine, standout roles, and they got him noticed.

But this role, as physicist Stephen Hawking, will likely get him an Oscar nomination.

Based on a 2007 memoir by Hawking’s ex-wife, Jane, The Theory of Everything stars Redmayne in an amazing, bravura performance as Hawking, who was diagnosed with motor neuron disease—similar to amyotrophic lateral sclerosis (ALS), known as Lou Gehrig’s disease—at the age of 21, while working on his doctorate studies at England’s University of Cambridge in the early 1960s.

His physician delivers the news without much hope; he gloomily gives Hawking only a couple of years to live, during which time his body functions—movement, speech, breath—will slowly, inexorably shut down. Hawking wants to know about his mind.

“The brain isn’t affected,” the doctor tells him. “Your thoughts won’t change. It’s just that, eventually, no one will know what they are.”

How wrong that doctor turned out to be. Hawking, now 72, went on to become a superstar in the world of theoretical physics, writing a bestselling book (A Brief History of Time) that sold 10 million copies, communicating through a speech-generating device and advancing his groundbreaking theories wrapping around time, space, black holes and the mind-bending mechanisms of quantum physics.

As Hawking, Redmayne is phenomenal, starting out as a gangly, chipper young university student, looking for “one single unifying equation that explains everything in the universe,” eventually morphing into the crumpled genius in the wheelchair who can only move one finger…and then nothing but an eyelash. 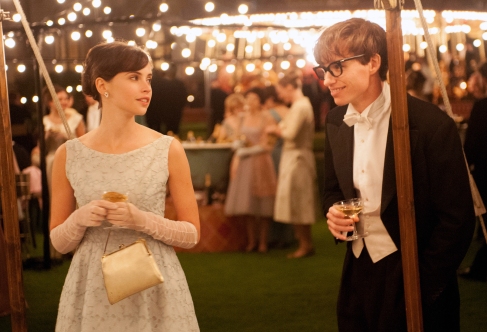 British actress Felicity Jones does a fine, forthright job as Jane, the charming coed who becomes Hawking’s first wife. And although Stephen’s hard “science” doesn’t mesh with Jane’s hopeful “faith,” the movie paints a sweet, sweeping picture of their courtship, marriage and young parenthood, and of the intense devotion that Jane brought to the increasing needs of Stephen’s debilitating physical condition.

It would have been nice for the movie to dig in even a bit deeper to Jane’s side of the story, especially when she’s tugged away to stray from her years of love and sacrifice with the young church organist who becomes the family’s friend and Stephen’s caretaker (Charlie Cox). Likewise, it feels a bit glossed-over and rushed when Stephen falls for the doting nurse, Elaine, who becomes his second wife, in the mid 1990s.

But one thing that’s never less than rock-solid is Redmayne, who makes you believe every minute he’s onscreen that he is Stephen Hawking, with all his genius, wit and determination intact even as his body withers around them. He never quite nails down that one, single unifying equation that explains everything—but this one role may be everything Redmayne needs to take home the first major awards of his acting career.