Ever since he was a tot, Great Britain’s Michael “Eddie” Edwards dreamed of becoming an Olympic athlete. But the odds were always stacked against him.

Weight lifter, pole vaulter, discus thrower, hurdle jumper—he didn’t care. But no amount of backyard “training” made any difference. With congenitally wobbly knees bolstered by leg braces and thick eyeglasses to correct his terrible vision, young Eddie was no one’s idea of the Olympic ideal.

Though it takes a few—or more—liberties, Eddie the Eagle is based on the rousing real-life story of Edwards, who proved all the naysayers wrong to become an Olympic competitor, representing Great Britain in the 1988 Winter Olympics as a ski jumper. The movie traces his improbable journey, against the wishes of his working-class father, who urges him to settle into a proper trade, and England’s stuffy Olympic committee, which thwarts his every attempt to qualify for their team.

Eddie counters that curt farewell with his usual optimism, tenacity and pluck. Nothing is going to deter him. He sets off on his own to a Winter Olympics training facility, where he meets former ski champ Bronson Peary (Hugh Jackman), who reluctantly, eventually agrees to take Eddie under his wing. 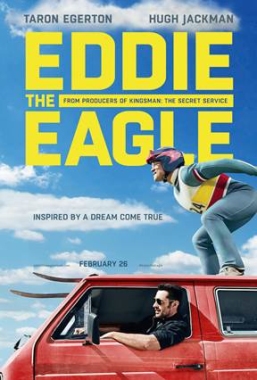 As the stocky, bumbling, socially awkward Eddie, Edgerton is miles—or kilometers—away from his best-known former role as a stylish, slick super-spy in Kingsman. Jackman provides American-cowboy grit (all the way down to his boots) as a washed-up one-time “whiz kid” of the slopes and former Olympic star himself, who finds his own path to redemption through Eddie’s relentless ambition.

You probably haven’t heard of British actor-director Dexter Fletcher, whose films haven’t made much of a splash here in America. But he gives Eddie the Eagle a look, texture and sound perfect for its time and place, from Prince Charles and Lady Diana salt and pepper shakers on a kitchen table to the music, which combines pop and rock tunes of the era with instrumental synthesizer swooshes and swirls that would have been right at home driving the grooves of most any 1980s flick.

The movie shares its uplifting underdog spirit with Rocky, Rudy, Seabiscuit, Hoosiers and any number of other film sagas about individuals or teams that come from behind, power through roadblocks or are told they can’t, shouldn’t or won’t ever.

When Eddie finally makes it to the Olympics, the crowd and the media love the naïve, effusively enthusiastic oddity who barely qualified for his team and who causes the announcers to declare, “The eagle has landed!” when he makes his climactic breathtaking, daredevil descent intact—and alive.

“The most important thing in the Olympic Games is not to win but to take part,” we’re told, a quote from one of the games’ founders. And no one embodied that spirit like Eddie, whose inspiring, soaring tale of determination and personal triumph in the heartwarming Eddie the Eagle is a joy to behold as it takes flight.