Life in the Dead Zone 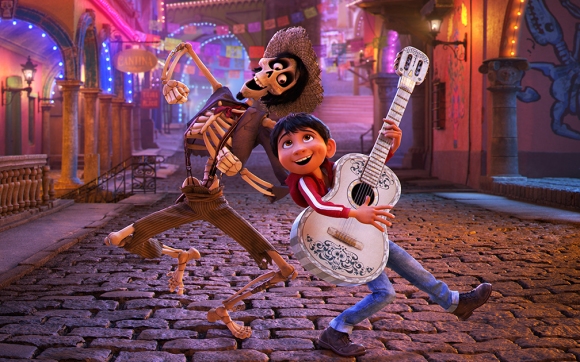 Pixar and Disney head south of the border for their 19th movie collaboration, a festive celebration of Mexican culture with a vibrant intergenerational message of family, heritage and the power of music.

In Coco, a young Mexican boy, Miguel (voiced by Anthony Gonzalez) dreams of playing the guitar and singing, just like his hero—Ernesto de la Cruz (Benjamin Bratt), a handsome, legendary performer who died young, leaving a legacy of songs, movies and memories. But in Miguel’s family of unassuming shoemakers, the story goes, music is forbidden, ever since his great-great-grandfather—a musician—headed out for a gig and never came back to his wife, the mother of Miguel’s great-grandmother, Coco.

As Miguel tells us in the movie’s opening sequence, “we’re the only family in Mexico who hates music.” Miguel’s father wants him to become a shoemaker. But Miguel has other hopes and dreams. He defies his family, making a homemade guitar, watching old videotapes of de la Cruz in secret and blissfully plunking along to his songs, especially “Remember Me,” his signature tune. When his grandmother finds his guitar, she smashes it.

Miguel’s instrument may be shattered, but not his spirit. That fateful night, he runs away. It’s Día de Muertos, Mexico’s annual Day of the Dead, and something crazy happens. Desperate to play at a local talent show, Miguel steals de La Cruz’s guitar from its resting place in his mausoleum. In doing so, he unleashes a curse and is magically to transported to the mythical underworld, the enchanted Land of the Dead.

To return home, he must get his family’s blessing—not an easy task, since Miguel wants to play music, and everyone in his family, on both the living and dead side, is dead-set against it.

The animation geniuses at Pixar have brought many things “to life” over the years—the cars of Cars, the toys of Toy Story, even the emotions of Inside Out. In Coco, co-writer and director Lee Unkrich, who also directed Toy Story 3, animates the Land of the Dead with dozens of distinctive skeleton characters, spectacular, luminous visuals, splashes of creativity and whimsy, sprawling, eye-candy settings and a story that snaps, crackles and pops with wit and warmth.

And just when you think you might have it figured out, it swerves unexpectedly in another direction and surprises you—tugging your heartstrings along with it.

Gael Barcia Bernal, who won a Golden Globe in 2016 for starring in Amazon’s Mozart in the Jungle, voices Hector, a netherworld scalawag who helps Miguel discover his true musical calling. Edward James Olmos is Chicharrón, one of Hector’s “forgotten” friends, who’s about to die the final death, “when there’s no one left in the living world who remembers you.”

And listen closely for one line spoken by John Ratzenberger, who continues as the only actor to voice a character in every Pixar movie.

The movie’s brilliant, intense attention to detail is everywhere, particularly the music. When guitarists play their instruments, fingers—flesh or bone—nimbly work the frets and the strings just like real guitarists’ would. Musicians tease, taunt and support each other in the afterlife, just like musicians do in the living world. The writers obviously spent some time hanging around real players.

And they obviously spent some time soaking up vibes with real family members. Coco is all about what it means to be a part of a group, a clan, a family. Get your tissues ready for the final minutes. Bring the extra-ply packets, if you’ve got any left over from watching the wrenchingly bittersweet closing moments of Toy Story 3, when Andy says his college goodbyes to Woody and Buzz, or Ellie and Carl’s “flashback” scene in Up.

Miguel’s wondrous adventure to the Land of the Dead transports the audience too, to a place where we’re reminded of the irreplaceable value of those we love, those who love us, and the bonds that endure long after we’re gone—as long as memories remain alive, and something to celebrate.