Give him a mo’: Young Han will grow on you in new Star Wars saga 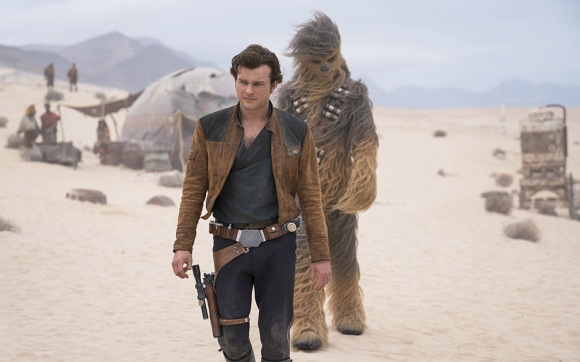 Meet the man who’d grow up to be the most famous space cowboy of all time.

In Solo: A Star Wars Story, Alden Ehrenreich stars as the younger version of the iconic character Han Solo, who—as we know!—will eventually evolve into Harrison Ford and align with Luke Skywalker and Princess Leia in a cosmic crusade for the fate of the universe.

But that’s not this flick.

Solo introduces us to Han and shows us how he got his smirk, his strut and his swagger, from his inauspicious beginnings as a “scrumrat” on a dismal, dingy mining planet where he and his rebel girlfriend Qi’ra (Emilia Clarke from HBO’s Game of Thrones) plot their getaway.

But Imperial goons, mutant dogs and fate intervene, and only Han is able to escape. He vows to return for his lady love, no matter what, and that sets the course of a wild, wide-ranging adventure that explains how young Solo meets the Wookie Chewbacca (Finnish actor Joonas Suotamo, back inside the costume again after Star Wars: The Last Jedi), and the suave intergalactic gambler Lando Calrissian (Donald Glover, star of TV’s Atlanta). And we learn how he comes into possession of his prized starship, the Millennium Falcon.

One of the best parts of the movie is learning more about Chewie, from his age (he’s old!) to his strength (yikes!) and his backstory—and watching the bond form between the shaggy, towering Wookie and the cocky wannabe pilot.

Maybe you already knew that veteran director Ron Howard was brought in by Disney at the eleventh hour to take over the reins from the original team of Christopher Miller and Phil Lord—who piloted The Lego Movie and 22 Jump Street to riotously comedic heights—after they were dismissed for “creative differences.” The movie reportedly underwent weeks of rushed reshoots and loads of retweaks, and it’s tempting to wonder about what was so off-course, so creatively different, about the version that didn’t get made.

But the one that hits the screen is solid, sound and sure to please Star Wars fans—Howard finds both freshness and familiarity in this exhilarating, rip-roaring yarn that zooms into hyperspace, stomps across muddy battlefields, flits around snowy mountaintops and introduces a palette of colorful new characters.

Ehrenreich, who had critically acclaimed appearances in Blue Jasmine and the Coen Brothers’ Hail, Caesar!, doesn’t really resemble Harrison Ford, the actor who branded the classic character of Han Solo in the original Star Wars (1977) and then three later movie appearances. Those are some big space shoes to fill. But hey, give the new Han some room to grow—to become Solo—and he grows on you. You see the character begin to take shape in the quips, the mannerisms and the awareness—if not the full embrace, not just yet—of a cause much bigger than himself.

Solo has a lot going on—rollicking, sprawling adventure; sock-o surprises; sweeping romance; double crosses and dastardly twists. Even though it’s meant to be a “standalone” movie (like Rogue One), without needing other films before or after it to continue the story, it’s got plenty of connectivity to the bigger Star Wars canon. (And you can easily see how it could stretch to another movie, if anyone wanted to take it there.)

Howard, the Oscar-winning Hollywood insider whose resume includes Splash, Apollo 13, the Da Vinci Code franchise and Frost/Nixon, certainly knows how build a blockbuster, and the movie is often a feast for the eyes. Film buffs will love its references to other movies and themes, particularly Westerns, World War I films like Stanley Kubrick’s Paths of Glory, and samurai flicks.

And when the movie opens with Han revving up his getaway “hot rod” on the mean, junky streets of the grimy, dead-end planet Coreillia, it’s cool to remember how the director appeared—before his directing career—as an actor in American Graffiti, a movie about kids in cars peeling out and dreaming of getting out. Maybe that’s why the scenes that really seem strongest in Solo are the ones that are “close to the ground”—not epic space battles, but times when characters talk, interact and feel the true “gravity” of their situation.

At one critical moment, Beckett and Solo find themselves a bit short of manpower. “C’mon, Chewie,” says Tobias. “Gonna need a little bit of that Wookie oomph.”

With excitement, tension, drama, style, emotion and a sure sense of its footing in one of the most fruitful franchises in pop culture history, Solo will delight Star Wars fans with plenty of that good ol’ Wookie oomph.