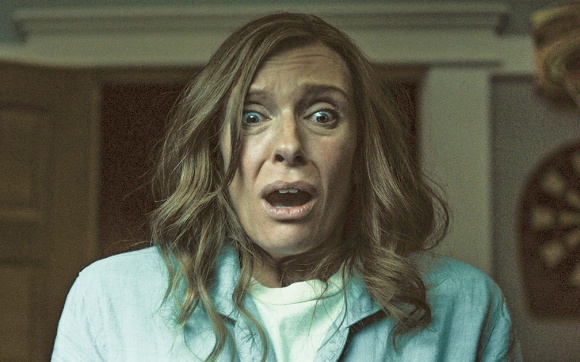 Lots of things can get passed on, generation to generation—homesteads, hairlines, heirlooms.

In Hereditary, first-time feature filmmaker Ari Aster makes a stunning big-screen debut with this terrifying tale of a family haunted—possibly—by something awful and unholy wrapped around the roots of a family tree. Maybe It’s something sinister and supernatural that won’t let go, as years go by.

And maybe it’s something else… something scarier still.

The movie begins with an ending—a funeral. The mother of Annie Graham (Toni Collette) has just died, and soon troubling clues begin to pile up, for Annie and for us, that somehow things just aren’t right.

Annie notices strange words scrawled on the walls of her home, and unusual patterns woven into welcome mats. She finds old scrapbooks, about spiritualism and the occult, that belonged to her mother, and cryptic notes. (“Our sacrifice will pale next to the rewards,” reads one of them.) Annie knew her mom—who lived with Annie and her family during her final years—was stubborn, secretive and given to “private rituals.” But this starts to really unnerve her. 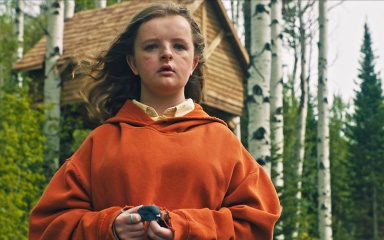 Anne lies about her whereabouts to sneak off to support-group grief therapy sessions, where she pours out her poisoned feelings about her mother and her family. In her confessions of grief, guilt and a lifetime built on brokenness, it becomes clear that her psychological scars are raw, deep—and possibly dangerous.

Then a horrific incident—an accident?—sends things spinning further out of control, into even darker, more deeply disturbing places.

There’s a lot going on in Hereditary, a lot to absorb and unpack as the movie slowly tightens its screws and masterfully layers on the creepiness. The Grahams are surely super-troubled, headed off the rails and hyper-dysfunctional. But is Annie haunted, cursed or crazy? The film wants to keep us, and her family, off-balance and guessing. Director Aster, who also wrote the screenplay, fills every scene with an atmosphere of almost suffocating dread and creates some truly unsettling sights that get under your skin, into your head and stay there, festering, long after they’ve left the screen. 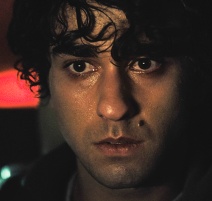 Charlie decapitates a bird. Prompted by a new friend (Anne Dowd, who plays Aunt Lydia on the hit Hulu series The Handmaid’s Tale), Anne conducts a living-room séance, which goes badly. Peter, seized by a grotesque contortion in class, bashes his head bloody on his desk, to the shock of his classmates and teacher.

Toni Collette, the prolific Australian actress whose resume includes more than 75 roles, is still best known for her movie appearances in the comedy Little Miss Sunshine and the mystery-drama The Sixth Sense. She’s amazing here, going full gonzo as a woman who becomes the vessel of malevolent forces she can’t understand or contain. 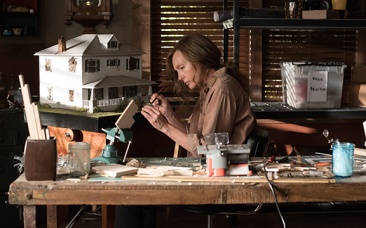 It’s fitting that her character, Annie, works as a gallery artist creating intricate miniature models of people, rooms and scenes. Her art becomes a direct reflection of her reality, in ominous detail. The tiny, delicate figures of her dioramas—shaped by her tools and hands—come to represent the frail, feeble, vulnerable characters of the film, manipulated, placed and positioned (and sometimes destroyed) by powers beyond their control or comprehension.

Director Aster borrows from other horror movies, but at least he borrows from some of the best, including Stanley Kubrick’s The Shining and Roman Polanski’s Rosemary’s Baby. And as it barrels into the wild, crazy-train, freak-out finale, Hereditary—with its rotting core of ancestry gone to hell and family dysfunction terribly, horrifically twisted, toxic, wicked, warped and wrong—ultimately finds a horror path all its own.

Can families be haunted? Hereditary suggests they certainly, surely can, in more ways than one—and that evil may be lurking, watching and waiting, in our house, our neighborhood and just beneath the surface of our gene pool.