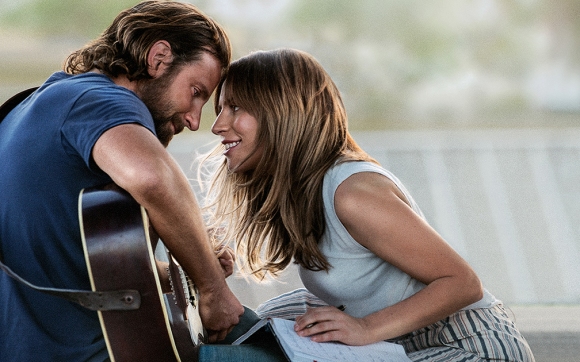 It might be the early Oscar buzz for this film, which has already wowed audiences and critics at key film festivals that often point the way to the Academy Awards.

With A Star is Born, Bradley Cooper makes the leap to directing, as well as starring in the soaring, song-filled saga about a ragged superstar musician (Cooper) who falls for a younger, much greener singer-songwriter, played by Lady Gaga.

That “sound” might also be the tinnitus, the ringing in the ears of Jackson Maine, Cooper’s character. Combined with raging alcoholism and drug use, it’s put a serious drag on his once-thriving career—at the very moment he happens to meet Ally (Gaga), performing in an East Village drag bar, where Jackson has ducked in to get even more sloshed after a show.

Their eyes meet, their hearts sync and pretty soon they’re making music together, in more ways than one.

The sound you’re hearing could also be the songs—elemental, essential building blocks of the movie. But Cooper’s A Star is Born isn’t a musical; it’s a character-driven drama about two people who live and breathe music. The songs—almost all of them written originally for the film, and some by Gaga herself—become passionate, purposeful swaths of the story. 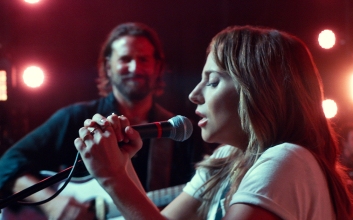 And Gaga, in her knockout debut leading movie role, sings the heck out of them. Cooper gives much of the spotlight to her, and she shines in a spectacular, rags-to-riches performance. We watch Ally emerge (we see her in the opening scene, literally, strolling past trash dumpsters in an alley) from her lowly street life to a become a dazzling, media-sensation pop princess.

Gaga built a real-life entertainment career out of being a popster chameleon, and part of the bedazzlement of her portrayal of Ally here is seeing her “bare,” with all that artifice and masquerade stripped away—down to her talent, her voice.

In one early scene, Jackson, fascinated by her fake eyebrows, wants to peel them off to reveal the real her. She tells him she’s always been self-conscious of her looks, in particular her big nose. “Your nose is beautiful,” he says, delicately caressing it with his finger.

In the movie’s many gorgeous, sweeping close-ups of Jackson and Ally’s faces, you see plenty of that beautiful nose—plus their lovely eyes, and their tears, when it comes to that.

Because, of course, what good is any love story that doesn’t give a good ol’ yank to the heartstrings? And this one has at least one major yank some folks might know is coming, especially if they’re familiar with how it’s been told before. A Star is Born was originally a movie in 1937 (with Janet Gaynor and Fredric March), 1955 (Judy Garland and James Mason) and 1976 (Barbra Streisand and Kris Kristofferson).

As Ally’s star rises and burns brighter and hotter, Jackson’s flickers and falters. Will her success eclipse his? Can their love survive? Is there a way she can save Jackson on his road of self-destruction? 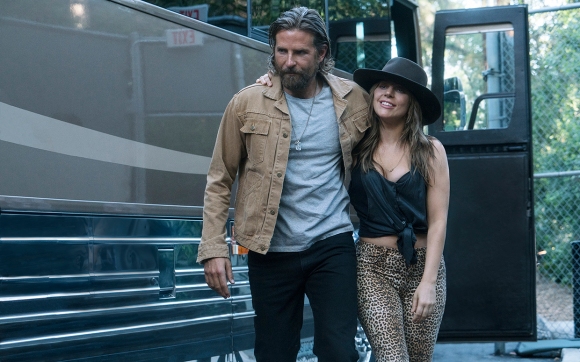 The movie gets so many of the modern musical details right, from backstage scenes, limo rides and private airplanes to songwriting and recording sessions and live performances. It drills down into the business of music without ever losing the human touch around which the story evolves and revolves.

As an actor-director, Cooper shows particularly strong promise, with an eye for solid craftsmanship and visual detail and a willingness to let his co-stars shine. A scene at an awards show is a particular standout, when a drunken Jackson stumbles onto the stage to join Ally, accepting her trophy, in front of a giant, pixelated screen image of themselves.

We all knew Lady Gaga could sing; she’s sold more than 27 million albums, recorded and toured with Tony Bennett, performed at a Super Bowl halftime show and won six Grammys. She’s got some serious pipes. And if you saw her in her role as the Countess on the FX series American Horror Story: Hotel, you won’t be surprised to find out she can act. But A Star is Born is aptly titled—she has arrived. A movie star is born.

There are some outstanding supporting performances as well, including Andrew Dice Clay (as Ally’s father), Dave Chappelle (as Jackson’s buddy) and Sam Elliott, who provides a meaty layer of backstory family drama as Jackson’s older brother, Bobby, a former musician.

There are only 12 notes on the musical scale, Bobby says. Every song ever written uses those same tones, just arranged a different way. “It’s the same story told over and over, forever,” he tells Ally.

Watch A Star is Born and you’ll see a dynamic, dramatic spin on an old, forever love story, a sensational, stupendous, star-making performance by Lady Gaga, and a super-impressive directorial debut by Bradley Cooper—and you’ll hear what everyone else has been buzzing about.