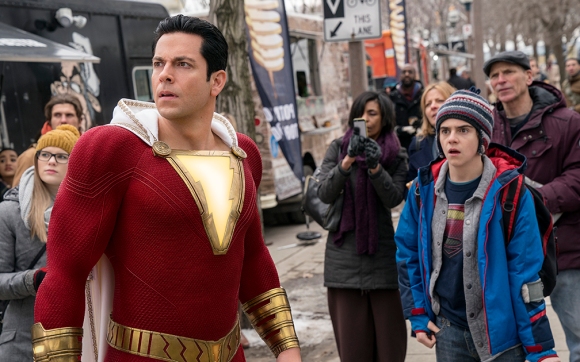 If you were a superhero, what would you want for your superpower?

In Shazam!, Philadelphia teenager Billy Batson (Asher Angel, star of the Disney Channel series Andi Mack) gets selected by an ancient wizard (Djimon Hounsou) to become a superpowered grown-up by speaking the magic word Shazam—an acronym that stands for the combined wisdom of Solomon, the strength of Hercules, the stamina of Atlas, the power of Zeus, the courage of Achilles and the speed of Mercury.

Billy gets uploaded with the ancient, legendary gifts of all six gods.

Every time Billy says it, lightning flies out of his fingertips, his body becomes solid as steel—and he magically, instantly zaps into the form an adult (Zachary Levi) in a colorful superhero costume. He’s got other powers, too, which he’ll soon discover. 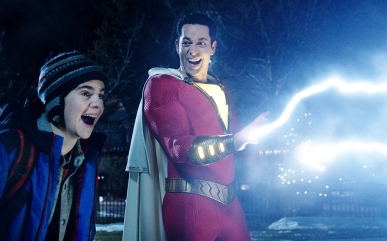 Shazam!, part of the DC Comics movie universe that also includes Superman, Batman, Wonder Woman, the Joker and Aquaman, is a dandy addition to the cinematic canon. In the modern era, superhero movies too often tend to get bogged down in too much plot, too many characters, too much depth and heaviness—both DC and its rival, Marvel, refer—after all—to their cinematic playgrounds as “universes,” places which are vast, dark, ever-expanding and full of too many stars and other heavenly bodies to even begin to try to keep count.

Thank goodness Shazam! doesn’t try to explain that it’s a property with a pedigree that goes all the way back the late 1930s. The character even rivaled Superman for comic-book popularity in the 1940s, and was even called Captain Marvel for a while—before reverting back to Shazam for a TV series in the 1970s. But all that excess baggage is in deep superhero storage somewhere.

This Shazam!, a playful, witty, clever, teen-centric jaunt, soars with a simpler story, free of the past and full of both humor and heart—plus, not surprisingly, a nasty supervillain and a horde of supernatural CGI monsters, the Seven Deadly Sins, summoned up from the underworld. (Director David F. Sandberg knows a thing or two about scares, which you’ll recall if you’ve seen his horror handiwork in Lights Out or Annabelle: Creation.)

Everything in the film is there to service the plot about Billy, who’s grown up in a succession of foster homes after being separated from his mother as a toddler at a carnival. He’s spent most of his young life running away, trying to find her—and to find a family.

Family is the buzzword of Shazam! You hear it mentioned several times. Billy has some major mommy issues. The villain, Thaddeus Sivana (veteran British actor Mark Strong), grew up with seriously toxic daddy issues. We see the two separate incidents that set the very different life courses for both Billy and Thad at the beginning of the film, and they’re both equally traumatic.

Years later, Billy meets up with Freddy, a superhero nerd, at his latest foster home, which buzzes with warm ramshackle life. There’s a group of other kids (Ian Chen, Faithe Herman, Grace Fulton and Jovan Armand) who immediately welcome him. When Freddy finds out about Billy’s secret—and secret identity—he desperately wants to become his sidekick. A montage (scored to Queen’s “Don’t Stop Me Now”) of adult Billy testing out his superpowers, while Freddy shoots videos (then uploads them to the internet) will certainly make you smile.

Grown-up Billy and Freddy get even with a couple of school tormentors, visit a realtor in search of a suitable superhero “lair” and thwart a convenience store robbery. Things get “serious” soon enough, though, when real trouble comes calling.

The movie takes place in a world where superheroes like Superman and Batman are already there; they’re the stuff of newspaper headlines, eyes-to-the-skies awe and dinner-table conversations, and a smushed-up bullet that’s bounced off the Caped Crusader’s chest is a real collector’s item. So there’s the matter of what a newcomer, like superhero-Billy, will be called. Thundercrack? Mr. Philadelphia? Captain Sparkle Fingers? Sir Zaps-A-Lot? Just like he has to grow into his responsibilities and his calling, he also has to grow into the name of Shazam.

Zachary Levi, 38, best known for his starring role in TV’s Chuck and for his season 2 appearances in The Marvelous Mrs. Maisel, is perfectly cast as the big-boy superhero, a teenager in a man’s body, suddenly endowed with abilities he never dreamed about. If he makes you think of Tom Hanks in Big, the movie gives you a knowing wink-wink you’re not wrong. During a chase scene in a department store, big Billy pauses on a giant electronic keyboard and accidentally stumbles over a few discordant notes. It’s not “Chopsticks,” but it’s enough to make the connection.

Levi is perfectly paired with young Glazer (he was Eddie in It); not only do they have a great “buddy” chemistry, but their characters demonstrate the broad intergenerational bond, and the reach, of the comics and comic-book movies.

Shazam! is a movie about a superhero and how he came to be, certainly, but it’s built on a foundation of friendship and family. “I’m a Foster Mom. What’s your Superpower?” reads a bumper sticker on a vehicle at Billy and Freddy’s foster home. Family, clearly, is where you find it, and superheroes are all around us.

Early in the film, after his first “zap” into Shazam and his costume—a bright red bodysuit, a big gold belt, boots and cuffs, a curtain-like white cape and a glowing chest plate in the shape of a lightning bolt—suddenly big Billy finds himself riding in a subway car, where another passenger is giving him a candid assessment of his, ahem, unusual getup.

“It shouldn’t work,” the fellow rider says, “but damn—it does!”

Shazam! has a lot going on, and hot damn, it works, too—good guys, bad guys, fun, fights, laughs, bullies, beasts, jokes and a genuine embrace of the wonder, wow, camp, comedy and gee-whiz that grease the wheels of the best comic-book movies.

And especially at the end, it reminds us how little boys and little girls, in homes of every kind, anywhere and everywhere, can all grow up to be superheroes—or supervillains. Family matters, words matter.