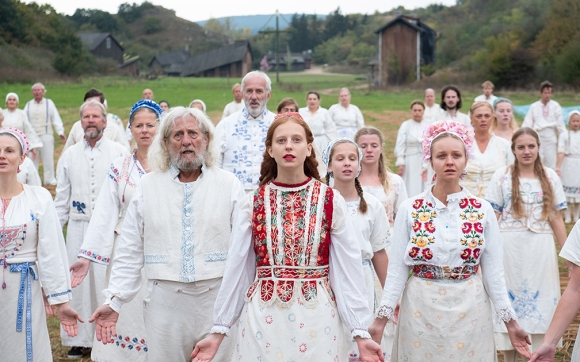 What a trip. And I mean that in more ways than one.

When a group of young Americans trek to Sweden to attend a midsummer folk festival at an isolated commune, they find a colorful pageant of quirks and oddities.

In the pastoral village of Hårga, miles and miles from any city, everybody’s smiling, dressed in white, dancing and prancing. The solar light shines 24/7; it’s never dark beneath Sweden’s “midnight sun.” There are hallucinogenic ‘shrooms and drinks to share. People are tooting on flutes, strumming on strings, drumming on drums. It’s hippy-dippy, like a Nordic Bonnaroo.

But this is a film by director Ari Aster, who last year gave us the supremely unsettling Hereditary, the hellzapoppin’ horror flick about a family that discovers something terrible and toxic just beneath the surface of its gene pool. There’s something terrible and toxic going on underneath the pastoral surface in Midsommar, too, and it doesn’t take long before it starts to show.

Like Hereditary, this movie is a slow-burning trip into the swirling vortex of a living nightmare, with characters who gradually discover the hallucinatory horrors that have unhinged, and overtaken, their normal world.

British actress Florence Pugh anchors the story as Dani, who accompanies her boyfriend Christian (Jack Reynor) on the trip, along with his bros, horndog Mark (Will Poulter) and cultural anthropologist Josh (William Jackson Harper). They’ve been invited by their Swedish university friend, Pelle (Vilhelm Blomgren), who grew up as an orphan in the commune and considers it his family. “It’s lots of dressing up,” he says. “Like theater.”

Dani is recovering from an almost unfathomable family tragedy, and her four-year relationship with Christian is showing some troubling signs of wear and tear. In Hårga, Christian forgets her birthday, and he begins flirting with one of the young “locals.”

So guess where all Dani’s grief, loss, anxiety, dread, worry, resentment and anger break loose and come pouring out, in a terrifying torrent of outrage, empowerment and awakening?

On one level, Midsommar is about a couple going through a really bumpy spell—a really bumpy spell, surrounded by eerily eccentric people dressed in white smocks, in the middle of nowhere, where things get creepier, and creepier still, and then really creepier, with every passing minute.

Director Aster masterfully cranks up the tension and the dread with every scene, taking his sweet, suspenseful time. This is horror as high art; there aren’t monsters that jump out of the shadows—for one thing, with no nighttime, there aren’t any shadows. It’s an elegant, deeply unnerving disturbia that scorches dark recesses of the imagination with savage, searing grotesqueries that will linger long after the credits roll (to the tune of the 1960s hit “The Sun Ain’t Gonna Shine Anymore”).

What are those oversize mallets for? You’ll find out. What’s the deal with that big brown bear in the cage? You’ll find out about that, too. Why can’t anyone go into the triangular-shaped building at the end of the field? The weird drawings, glyphs and pictographs—on the walls, on the ceilings, everywhere? They all tell a tale, one that will play out for our characters, eventually. And that thing sticking up in the garden…is that a—

At the festival, visitors quickly learn a few basics—or at least they should: Don’t pee on the sacred tree. Stay out of the henhouse. No pix of the holy book! Beware the love runes. And go easy on the strained tea, the meat pies and the mushrooms. These villagers have some pretty strict rules, they take their traditions seriously and they believe in a rather rigorous, unforgiving system of punishment.

Who becomes the festival’s new May Queen, after a grueling maypole dance competition? I’ll give you one guess. What happens when old-timers age out of the “circle of life”? Apparently, Hårga doesn’t have retirement communities. And when girls are old enough to have sex, it’s a real community affair—making for one of the most queasy, bizarre, unerotic sex scenes of any film in a long time.

Pugh is on a roll playing strong women. Having previously rocked Lady Macbeth (2016) and Fighting With My Family (2019), in December she’ll star as “little sister” Amy March in Little Women, alongside Meryl Streep, Emma Watson and Laura Dern. Here, as Dani, she transforms tragedy and hurt into something fierce, ferocious and twistedly triumphant.

Midsommar shows you sights you never thought you might see. It’s a demon’s view of an outer circle of hell, a perverse celebration of darkness in full daylight, and a wickedly warped travelogue that makes good ol’ home sweet home look sweeter than ever.

What a trip, indeed. At a time when people are worried about going to the Dominican Republic, travel agents should be steering people away from places like Hårga. Midsommar takes you on a crazy, what-did-I-just-watch journey into a finely calibrated, macabre mind-scrambler of movie madness. You’ll be thankful you’re only visiting a fictional festival in a fictional place, in a film. But believe me, it will almost certainly revisit you—when the sun finally goes down, in your deepest, darkest nightmares.