Cinema’s creepiest clown is back—and it only took him two years. Or was it 27?

Depends on how you’re counting.

It Chapter Two, the sequel to the 2017 horror-hit blockbuster, is based again on Stephen King’s novel from 1986. The new movie is set 27 years after the events depicted in the first film, when a group of small-town Pennsylvania kids first confronted Pennywise, the deadly, dancing, drooling clown.

Chapter two, 27, 1986, 2017… Keeping up? The only numbers that matter are at the box office, which is likely going to be huge for this mega-budget scare-fest that pulls out all the stops with special effects, star power and a combo cast of kids from the first film, plus new actors now playing them as adults. Fans are going to flock to it, just as they did to the first one, a $700 million box-office behemoth that’s become the highest-grossing horror movie of all time, and the most successful King movie adaptation by far. 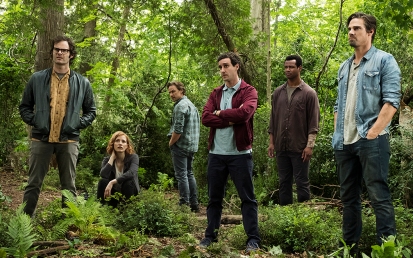 The movie reunites the kids (Sophia Lillis, Finn Wolfhard, Jaeden Martell, Chosen Jacobs, Jack Dylan Grazer, Jeremy Ray Taylor and Wyatt Oleff), a group of misfits and outcasts who called themselves the Losers when they banded together to confront Pennywise the first time. Now, as adults spread out across the country, they regroup—as they vowed to do all those years ago—when they hear that an evil tide is once more on the rise in their hometown of Derry.

The movie flips in flashbacks between the younger Losers and the grownups they’ve become (Jessica Chastain, James McAvoy, Jay Ryan, Bill Hader, Isaiah Mustafa, James Ransone and Andy Bean), and sometimes even pairs them together in the same scenes.

Bill Skarsgård returns as Pennywise, the super-nasty sewer dweller who definitely throws the nightmare needle into the red. He can shape-shift into just about anything, and his mouth is a maw of teeth just waiting to pounce—especially on cherubic children. Wanting to hire entertainment for your kid’s birthday party? Pennywise has ruined that gig for clowns. Get a bounce house and fill it with snakes, or hire a drunken knife thrower instead. You’ll feel so much safer.

King’s book was a cumbersome 1,400 pages, and it’s already been one movie. Now get ready for Chapter Two, which clocks in at nearly three hours long. Just threading all the younger and older characters (and actors) into the tapestry of the plot requires a lot of stitching. Director Andy Muschietti, also returning from the first It, fleshes out everyone’s backstory as we learn about their initial encounters with Pennywise—and the individual childhood insecurities, weaknesses, tragedies, secrets, failures and fears that the clown comes to represent, exploit and feed upon. 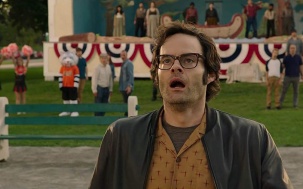 Even though Chastain, as grown-up Beverly Marsh, is a two-time Oscar nominee, it’s Hader, as the bespectacled, trash-mouthed Richie Tozier, who becomes the movie’s clear standout and audience favorite. McAvoy has some major moments as older Bill Denbrough, still haunted by how his little brother was taken and killed by Pennywise at the beginning of the first film. (Now a writer whose books are made into big Hollywood movies, Denbrough is perhaps the movie’s “projection” of King himself.)

There are also a couple of big-name cameos and a nod to another iconic King movie adaptation, The Shining.

The movie earns its R rating with some truly gruesome, gory incidents, including a brutal bashing of a gay character (but to give credit where it’s due, it was taken straight from the book, and in turn inspired by a real-life 1984 hate crime in Bangor, Maine) and a couple of particularly unpleasant attacks by Pennywise. But it mixes its phantasmagoric horror with dark humor, as the Losers quip and quibble.

All the Losers, past and present, are winners—the younger actors slip right back into their roles, and the “oldsters” pick up the character nuances and personality tics of their younger counterparts. The movie blends traditional horror with the psychological terrors of adults confronting the demons of traumas long ago forgotten, suppressed, or buried by time.

Not everything works. The movie’s too long, it feels a bit overstuffed, and sometimes the bombastic effects (especially in the finale) swallow up the story and the characters. A few too many details just seem to hang loose. Somehow, no one else in the whole town of Derry, other than the Losers, realizes that the World’s Deadliest Clown is living underneath them, preying on their children—and he’s been doing it for centuries. 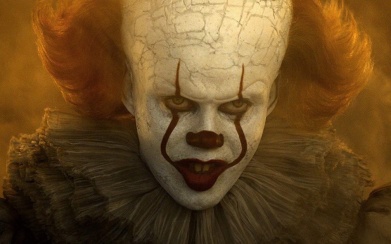 And speaking of everyone else in Derry, where are they? The streets are always deserted. Maybe Pennywise ate everyone. I think the movie must not have had much budget for hiring extras after spending so much for CGI, including “de-aging” the young actors, shaving off a few crucial growth years to get them back to looking like the fresh-faced early teens they were when making the first movie in 2016.

But this is it, supposedly, for It. At least that’s what the poster and the movie promos say. And It goes out with a bang—full of strangeness and suspense, a jack-in-the-box of jolts and jumps, oozing and clattering and shrieking with freak-show, gross-out, goose-bump weirdness, giving the ol’ heartstrings a sentimental tug while it cranks out hair-raising, FX terrors.

And all in all, two hours and 49 minutes, 27 years and a bunch of scares later, it’s a good ending for a bad—a very, very, very bad—clown.