Our Brand is Crisis

“I can convince myself of many things, if the price is right,” says Sandra Bullock’s character, “Calamity Jane” Bodine, in Our Brand is Crisis.

Jane is pretty good at convincing other people, too. That’s why the formerly formidable campaign strategist is lured out of early retirement to help an unpopular Bolivian president in an upcoming election—by convincing the reluctant public, through whatever means necessary, that they should vote for him.

But this battle’s not just political, it’s also personal: Bodine has to match wits with an old nemesis, Pat Candy (Billy Bob Thornton), who’s been hired to strategize for the other side.

It’s based on things that went down at a real 2002 Bolivian election, which was chronicled in an award-winning 2005 documentary of the same name. Thornton’s character is a movie remold of former hardball strategist James Carville, who appeared as himself in the original film. Bullock’s character—a part originally written for a male—is an amalgam of several other actual people.

Bullock and Thornton provide the movie’s real spark; it’s too bad there’s not more of it, and more of them, to help the whole thing catch fire. There’s a murky, turbulent history between Bodine and Candy that we never fully understand, just one of several things the movie doesn’t make clear. But the deft, unfussy way the two characters spar and parry, in guarded conversations and piercing silences, are artful reminders of just how these two pros can make the most of their screen time.

George Clooney is one of the producers. The director, David Gordon Green, has a wide-ranging resume that includes the stoner comedies Pineapple Express and Your Highness. Peter Straughan, who provided the screenplay, is also the writer of the espionage thriller Tinker Tailor Soldier Spy. The movie has some solid DNA, but it never seems to know whether it wants to make us think, make us chuckle or make us sad. Is it political parody with heart, a satire that jabs with its funny bone, or a south-of-the-border rom-com based on real headlines? (The biggest  audience response, for what it’s worth, comes from Bullock’s bare buttocks hanging out an open bus window.)

If you’re a political junkie, this is your time of year. The presidential candidate debates make for riveting, sometimes-outrageous TV, and shows like The Good Wife, Scandal, Veep and the new Agent X take viewers inside the heated (fictionalized) heavings of Washington, D.C. Our Brand is Crisis brings up some timely points about what it takes to mount—and win—a campaign.

But is anyone surprised that politics plays dirty? That strategists can be snake-oil salesmen who convince people to buy things they don’t need, to elect leaders who may not have their best interests in mind? That America exports its will and influence to other parts of the world?

After her first meeting with the Bolivian president, Bodine realizes what a daunting job she signed on for, and she wearily notes that he “doesn’t smell like a winner.” Unfortunately, despite Sandra and Billy Bob, neither does this. 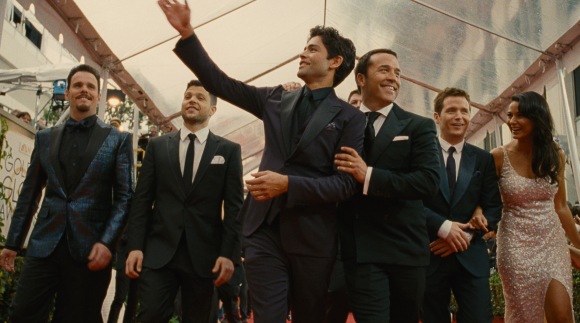 Based on the 2005-2011 HBO TV series about a young actor and his posse of best friends in Hollywood, this feature-film treatment is targeted primarily—and blatantly—to the same kind of hedonistic horn dogs who make up the movie’s base of bro-main characters. 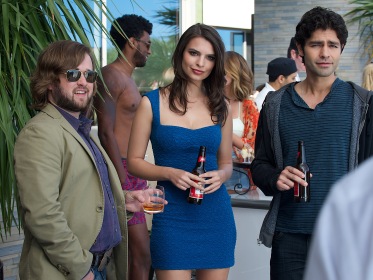 The pencil-thin plot: Will Vince and his crew cash in once again, or will Hollywood finally break the bros?

The Entourage TV show was loosely based, at least originally, on the some of the experiences of actor Mark Wahlberg, who served as executive producer and is now one of the producers of the movie (and has a cameo, with his own tagalong “entourage”). But the movie version plays like such an overblown, oafish wet-dream stream of sexy (often topless) women, caustic one-liners and obscene wealth, it seems adrift in its own alt-universe, like an R-rated, 100-minute Viagra commercial shot inside a VIP strip club operated by light-depraved leprechauns. If you liked Entourage and its freewheeling, high-living characters on TV, you may think they’re even cooler enlarged to cinema-size. Otherwise, you might wonder what anyone ever saw in this pack of boors, mooches, rakes and cads with so few discernable, redeemable skills, talents or virtues or values.

The movie’s attempt at addressing something “deeper”—as Eric confronts his paternity with his pregnant ex-girlfriend (Emmanuelle Chriqui), or Ari seeks peace through spirituality—seems pathetically out of sync with its true, crude flow.

It’s almost like everyone inside Hollywood wanted a piece of the action. The bigger question: How many people outside of Hollywood will want a ticket to this smug, bloated, big-screen, bro-fest-ic boy party?