In 2012, Snow White and the Huntsman gave the age-old fairy tale a sassy new action-y feminist twist, with Kristin Stewart as the feisty, fair-skinned maiden—foretold by the Magic Mirror to be the loveliest in the land—and Chris Hemsworth as the evil queen’s “huntsman” ordered to take her into the woods and kill her.

Of course, things didn’t quite work out that way—and now we have The Huntsman: Winter’s War, a sequel. Actually it’s a prequel. Well, I think it’s a little of both, and a mash-up of several other things, too, and quite a bit of an all-around muddled mess.

And Snow White seems to have wisely decided to steer clear from it all. So there’s no Snow in this Huntsman, unless you count the times she’s mentioned by name. But the movie certainly isn’t hurting for other talent. Hemsworth is back, and so is Charlize Theron as the wicked monarch Ravenna. Emily Blunt is newly aboard as Ravenna’s sister Freya, turned into a cruel “ice queen” by an act of heartless treachery. Jessica Chastain is Sara, who like Hemsworth’s rebellious Huntsman, grew up as an abducted child soldier forced to serve in Freya’s army of marauders.

British comedic actors Nick Frost and Rob Brydon, shrunk to wee size by the modern magic of digital effects, play a pair of dwarf brothers who provide most of the chuckles in this otherwise dull and dreary trek through a disjointed plot that feels like someone threw bits of Game of Thrones, Disney’s Frozen, Lord of the Rings and The Wizard of Oz into a blender with some crushed ice, black goo and gold flecks, then set it to puree.

If you’re into ornate costumes, you might dig the over-the-top duds in which Blunt and Theron get to vamp. In the couple of scenes they’re together, I kept wishing Cher would suddenly appear—maybe descending from the ceiling—for a full-on Las Vegas revue.

The storybook decor is lush and quite lovely, especially when the Huntsman, Sara, the two dwarves and their special-effect dwarf dates (Alexandra Roach and Sheridan Smith) take a day trip to Goblin Land, or something like that, to retrieve the purloined Magic Mirror, which looks like a huge polished cymbal from a music store. Some of the location filming was done in England’s Windsor Great Park, although I’m pretty sure you won’t find any big, blue ape-men, giant moss-covered snakes or tiny florescent flying fairies there.

Not campy and gonzo enough to be real fun, nor dark and dangerous enough to qualify as truly grim, this is instead a drab, disjointed stab by a first-time feature director who, bless his heart, can’t seem to find his target in all the icy, FX-laden glop. The best—and most amazing—thing about it by far is its all-star, A-list cast, all of whom who gamely give it their best in the service of something clearly less than “the fairest of them all.”

If Australian director George Miller never did anything else, he’d forever be remembered as the man who gave the world the post-apocalyptic road-thrills drama Mad Max. Miller’s movie, in 1979, was a low-budget landmark of gonzo filmmaking that became an action-adventure icon, spawning two sequels, both starring Mel Gibson and both directed by Miller.

Now Miller—who went on to produce, write and/or direct other acclaimed films, including Dead Calm, Lorenzo’s Oil, Happy Feet and Babe—has returned to where he started, and this explosively revved-up reboot, epic in every sense of the word, may become the crowning achievement of his already impressive career. It’s big, bold and brash and makes the loudest bang, by a long shot, of any movie this year so far—if not any movie of any recent year. It’s grotesque and gorgeous and glorious all at once, both brutal and beautiful, a thing of cinematic wonder and wizardry, a circus of eye-popping, old-school stunt work, and a crazy orchestration of such sheer, all-out gusto, spunk, energy, imagination and nerve, it makes most other blockbusters, superhero sagas and special-effect blowouts look like they were made with doodles, doodads and trinkets from a toy box.

Miller’s new Max grabs you from the first scene and never lets go as it establishes its central character, its parched desert setting and its harsh parameters. “My name is Max,” intones the figure we first see onscreen snatching a lizard from his boot—then popping it into his mouth and eating it. “A man reduced to a single instinct: survival.” 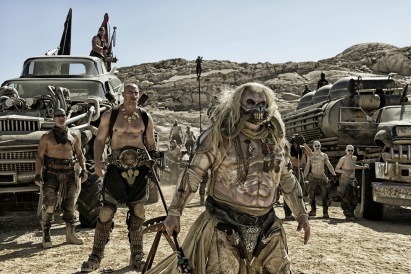 And then, BAM—Max (Tom Hardy) is off and running—and so are we—on a wild, wild chase across a bleak wasteland of sand, mud and rock, pursued by a banshee-like posse of freakish “war boy” cultists, and thrown by dire circumstance into the company of a ferocious, one-armed defector (Charlize Theron) and her precious cargo: the four young wives of the cult’s terrifying leader, Immortan Joe (Hugh Keays-Byrne, who also appeared in the original Max).

Miller stages his story (written with collaborators Brendan McCarthy and Nick Lathouris)—a ripping fable about a small group of people looking for redemption in a ruined, bizarr-o world of fire, water, gasoline and blood—with constant movement. His cameras, like his characters, almost never pause; they’re always sweeping, swooping, panning, scanning or tracking, adding to the persistent, insistent sensation of motion and danger, of never feeling like it’s safe enough to slow down.

The automotive stunts, chase scenes and fights are so extraordinarily, intensely over-the-top, they become things of art—manic, mad-hatter masterworks of coordination as men scamper over, under, through, in and out of all kinds of cars, trucks and monstrous hybrid vehicles as they roar along at great speeds, often colliding, frequently exploding—and, in one absolutely stupendous sequence, being sucked up into a sand cyclone.

Harding is terrific, Theron is even better, and Miller, well, this time he’s outdone even himself. Mad Max: Fury Road isn’t just the movie to see—it’s the movie so “max” you’ll need to see it more than once to marvel in all it is, all it does, and just how much it blows almost everything else away.