Hollywood loves taking a good idea, dusting it off and giving it a new shine.

Or a new shiner, as the case may be with Fist Fight, in which a hapless high school teacher (Charlie Day) is challenged to a brawl by one of his fellow instructors (Ice Cube) at 3 p.m. on the last day of classes.

If you’re old enough to remember, you may recall a wonderful little 1987 movie called Three O’Clock High, which had essentially the same premise with two students. If you’ve got a really good memory, you may recall that Three O’Clock High offered a contemporary cinematic nod to High Noon, the 1952 Gary Cooper classic about a marshal forced to face a gang of killers alone—as a clock tick-tocks down the anxious minutes in real time.

The grudge match in Fist Fight is played for laughs, and there are plenty, beginning with the classroom incident that gets mild-mannered English instructor Andy Campbell (Day) crossways with hot-tempered history teacher Ron Strickland (Cube). Day is slight, white and whiney; Cube is thick, dark and growly. They’re so temperamentally and physically at odds, anything they do together is practically pre-set to be funny.

To add to the comedic recipe for disaster, the fight isn’t all that’s looming for Campbell. His wife is pregnant and about to pop any minute. Rumors of school cutbacks are swirling, and he’s got a meeting with the superintendent at 2 p.m. to find out if his job is among them. Right after that, his daughter has a recital at her middle school, and he’s promised he’ll be there to join her in a dance routine from the musical Annie. 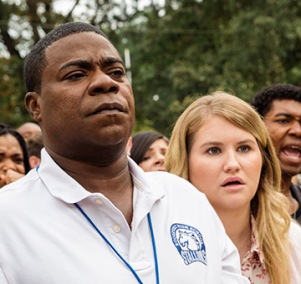 Stephnie Weir from Crazy Ex-Girfriend has a moment as a school official. JoAnna Garcia Dahl, who plays Ariel in Once Upon a Time, is Campbell’s wife. Young Alexa Nisenson, 11, who made her movie debut last year in Middle School: The Worst Years of My Life, plays Campbell’s daughter, who ditches Annie at the last minute for an explosively raw rap song by Big Sean that makes the talent show scene from Little Miss Sunshine look as quaint and sedate as something from Lawrence Welk. 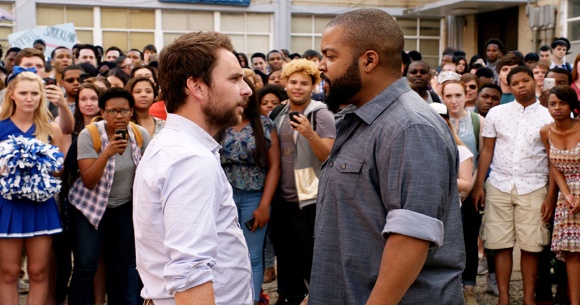 This is Day’s show, and he does a nice job, channeling a comedic mojo that feels like a strain of easygoing, Steve Carell-ish everyman hot-wired with Casey Affleck’s unpredictable intensity. Cube doesn’t get near as much to do, but he does get to shine in very funny scene where the rumors about his fearsome teacher come colorfully to life as students tell of what they’ve heard about him and his past—soldier assassin, violent drug lord, renegade cop, crazy jazz pianist.

The jokes fly, but there’s some serious, timely messaging here, too—mainly about “the depths to which the school system has fallen,” as noted on one of the news channels covering (by helicopter!) the “#teacherfight,” which becomes a worldwide viral sensation driven and promoted by memes, Twitter, YouTube and other social media. Pick an education topic—inclusiveness, bureaucracy, job insecurity, funding, resources, bullying, drugs, vandalism, student behavior issues—and it’s there, in between the laughter.

Campbell has three scenes in front of his English classes, throughout the day, in which we see him unravel a bit more each time, becoming progressively more rattled as his appointment in the parking lot looms. Can he rally and rise to the challenge?

See you in the parking lot at 3 o’clock to find out!