Gollywhopper of a Ghost Story

Crimson Peak is a ghost story with a capital G—a couple of them.

The first is for writer-director Guillermo del Toro, the acclaimed Mexican filmmaker renowned for the dark-fantasy, supernatural-horror and sci-fi blowout movies Pan’s Labyrinth, Hellboy and Pacific Rim. Just having his name attached has kept fans and industry insiders buzzing for months.

The other big G: This ghost story is a real gollywhopper, a voluptuous, sumptuously festooned saga of love, lust, jealousy, money, madness, secrets, ambition and spirits that refuse to let go, all set in a gigantic Gothic manor on a barren hillside in early 19th century England. 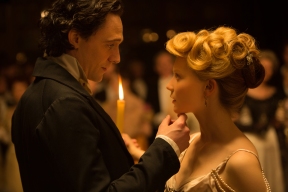 Mia Wasikowska plays Edith, a young New York heiress who falls in love with a visiting British baronet, Thomas Sharpe (Tom Hiddleston). An aspiring writer, Edith believes in ghosts, ever since she was visited as a child by the wraith of her departed mother, who ominously warned her to “Beware Crimson Peak.”

“Where I come from, ghosts are not to be taken lightly,” the baronet tells Edith, which is one reason she falls for him over the objections of her father (Jim Beaver from TV’s Supernatural), who tries to send Sharpe and his coldly aloof sister, Lucille (Jessica Chastain), packing. But a gruesome incident—that wasn’t the “accident” everyone seems to think—leaves Edith to make her own decisions. She decides to follow her heart and marry the handsome Brit.

When she arrives in England with her new hubs, Edith finds his big, creaking, groaning house, Allerdale Hall, with a hole in the ceiling, leaves in the foyer, and gloopy blood-red clay oozing through the wooden slats of the floor. She also finds things that howl, scream, creep, crawl and go bump in the night. 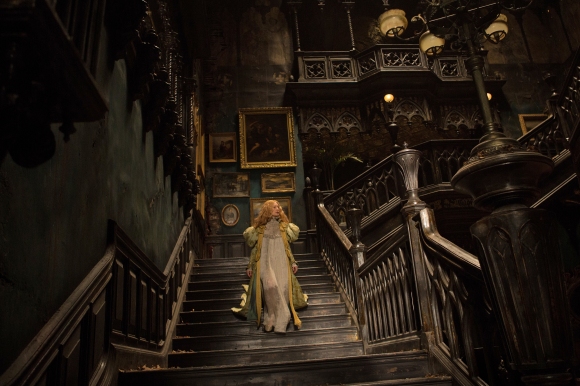 And she learns that estate is nicknamed Crimson Peak—and that ghosts aren’t the scariest things inside the house.

Audiences accustomed to the cheap thrills and gutbucket carnage of many contemporary horror flicks might be a tad disappointed that del Toro is much more interested in meticulous, old-school storytelling and creating a spectacular world for his characters to inhabit. Blood does flow and there are moments that will make you gasp, but they jarring red punctuation marks on a much bigger tale, one with horrors on an even grander, more operatic scale. 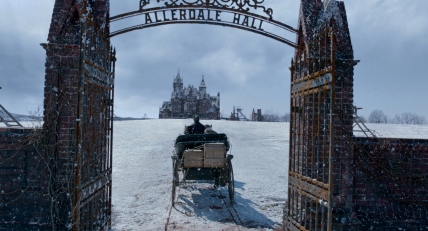 And in this big, big-looking, super-stuffed spook-fest, the attention to detail is astounding, from rooms, costumes, furniture, jewelry, kitchenware and candelabras, down to the tiniest of trinkets. The haunted house of Allerdale is a thing of wonder in itself, a real-life, three-story-tall cathedral of gloom (constructed especially for the movie) with a rasping, decrepit elevator, a sweeping grand staircase, murky hallways, hundreds of moths on the walls, locked vats of goo in the basement, and some deliciously dark, twisted surprises.

Sometimes everything feels like a phantasmagoric Downton Abbey nightmare knocking around a forbidden section of Disney’s Haunted Mansion.

“Ghosts are real,” a battered-looking Edith tells us twice, bookending the movie at its opening scene as well as its violent, sprawling finale—during which she discovers not only the power of her pen, but also the brutal effectiveness of a coal shovel. If you ever get put through the wringer like she does in Crimson Peak, you’ll believe they’re real, too.