Dumb and Dumber To

Directed by Bobby and Peter Farrelly

It’s dumb, all right, more stridently dumber, even, than its predecessor, which made a dynamic duo of dummies out of Jim Carrey and Jeff Daniels playing clueless, nitwit grownups stirring a raging sea of stupidity. Now, 20 years later, Lloyd (Carrey) and Harry (Daniels) are older, but certainly—most definitely—not wiser.

Dumb and Dumber To reunites Carrey and Daniels with the directors of the original movie, Bobby and Peter Farrelly, who turned slapstick, gross-out gags, crude jokes and potty humor into a cinematic calling card in pretty much everything they went on to make, including There’s Something About Mary, Kingpin and a big-screen reboot of The Three Stooges.

When the first movie came out, in 1994, Carrey’s comedy star was already red hot, thanks to TV’s In Living Color and the hit movie Ace Ventura: Pet Detective. Despite occasional forays into semi-serious comedy-drama, he continued to find that audiences connected with him best as a rubber-faced, loose-limbed goofball.

Daniels’ career sent him in a slightly different direction, through dozens of diverse film and TV parts and finally into his current Emmy-wining role in the TV political drama The Newsroom.

Together again here, they’re a pair of 50-something stooges on a cross-country comedy collision course—which isn’t to say that I didn’t find some of it laugh-out-loud funny. (But parents and other concerned citizens, take note: Even though it’s rated PG-13, it seems to be straining to see how far it can nose into R-rated vulgarity without actually going over the line.) There’s a cat that farts bird feathers, a little old lady in a nursing home who tricks a visitor into “feeling her up,” and a steady stream of jokes about poop, pee, boobs and butt cracks. Are you laughing yet?

Twenty years ago, the idea of a couple of adults who acted like 10-year-olds in an otherwise “normal” world seemed like the latest bit of inspired idiocy on a long entertainment timeline running all the way back to silent movies. Now, with characters who’ve aged without maturing, in a story that seems sometimes too lazy to have tried to do much of anything different from the first time around, it just looks sad. And Carrey’s character’s clueless “craziness” now seems cruel and even pathologically twisted, taking advantage and making fun of people, insensitive to everyone and everything—not just dumb, but loathsome, pathetic and truly crazy. 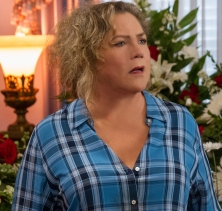 Carrey and Daniels are game for just about anything, throwing themselves (sometimes literally) into all sorts of physical shtick. Rob Riggle is a hoot in a dual role, one of them as a special-ops assassin with special concealment skills. Kathleen Turner sends up her “sexy” image from the ’80s. Rachel Melvin, who portrayed Chelsea Brady-Benson on TV’s Days of Our Lives, plays a young woman who causes Lloyd and Harry to set out on a trip to a convention of brainiacs—where, of course, they cause quite a stink

At one point, Lloyd is asked if Harry has Aspergers. “Probably,” Lloyd replies. “I know he doesn’t wipe very well.” If that joke makes you grin, this may be your kind of movie. If it makes you groan, well, steer clear—because there’s a lot more like that where it came from.