Maybe The Notebook didn’t make you sigh, sob or swoon enough. Perhaps you really liked Channing Tatum in Dear John, but wondered…hmmm, how would he look on top of a big, bucking bovine? Or maybe, even with fireworks, a huge explosion and a character that turned out to be a ghost (!), there still wasn’t quite enough going on for you in Safe Haven.

If, somehow, none of the other nine movies made from romance novelist Nicholas Sparks’ popular, heart-tugging tearjerkers had enough whatever-it-is that you go to Nicholas Sparks movies for, well, the tenth might just be the charm. 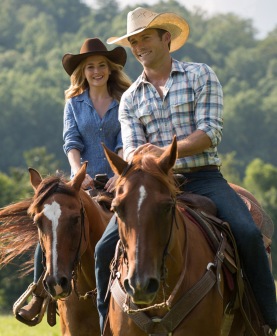 First of all, The Longest Ride doesn’t just give you one love story, but two—a pair of parallel passion tales stretching across more than two hours of screen time and four-fifths of a century. And it’s positively loaded—with sorority girls, hunky cowboys, country music, horses, bulls, modern art, love letters, World War II battlefield heroics, playful beach frolics and a sex scene so hot and steamy it seems to smoke up the whole Smoky Mountains.

It also has massive amounts of hoke, contrivance and manipulation. The plot, driven by a series of outrageously ramped-up coincidences, sets up a tale so implausibly fluffy, you wonder if the characters would be able to set foot on anything solid if they happened to come across it. A slow-mo shot of snortin’ bull snot is about as close as things gets to a sense of gritty reality.

Britt Robinson (who played Angie McAlister on TV’s Under the Dome) is Sophia, a Wake Forest University student who falls for professional bull rider Luke (Scott Eastwood, son of Clint), which threatens to put a wrinkle in her plans for a post-graduate internship at a prestigious New York art

institute. One dark, rainy night after their first date, they come across a wrecked car and its badly injured driver, Ira (Alan Alda), whose own story then begins to unspool in flashbacks as the rapt Sophia visits him in the hospital, reading aloud to him from the box of letters he’s saved over the years from the love of his life, his late wife, Ruth.

Like the big bowl of mac and cheese Luke says is his favorite dish, it’s all mostly a bunch of squishy, deep-dish goo—but hey, it does look pretty good. The on-location photography, in and around Wilmington, N.C., is picture-perfect, which adds to the feel of dreamy romantic fantasy. Scott Eastwood—who bears an uncanny resemblance to his famous father in his early acting days—is a bona fide hunk, and time seems to slow down every time the camera pans across his sculpted, shirtless torso (which is often). Pay attention to the actors who play the younger versions of Ira and Ruth, Jack Huston and Oona Chaplin, not only because they make Ira and Ruth’s story so much more interesting and compelling than Luke and Sophia’s, but because you’re watching the progeny of Hollywood royalty: He’s the grandson of legendary actor-director John Huston, and her granddaddy was silent-movie icon Charlie Chaplin.

The Longest Ride likely won’t convert any newcomers to the Nicholas Sparks fold. But if you’re already a fan, hey, saddle up: This bull’s for you.