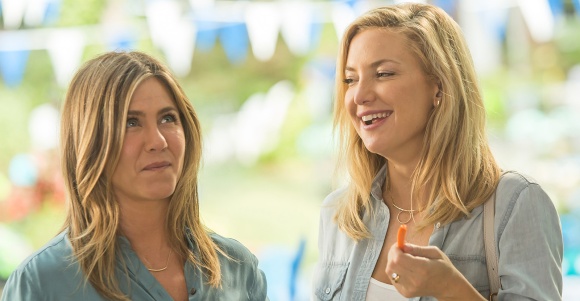 This is the third holiday-themed ensemble comedy from Garry Marshall, the veteran TV writer/producer (Happy Days, The Odd Couple, Mork and Mindy) and movie director (Pretty Woman, Runaway Bride) who also previously brought us Valentine’s Day and New Year’s Eve. In both of those films, as in this one, an all-star cast of unrelated characters manages to somehow intersect with each other, as improbable as it might seem.

Marshall is a maestro of this kind of comedic mixology, plied and played over the decades. But it seems to have run out of a lot of its steam, at least for contemporary times. Most of his movie gags feel like they’re waiting for a sitcom’s laugh track to back them up, and his bawdy, brusque, broad brushstrokes of humor aren’t what anyone would exactly call enlightened.

“I don’t get that joke, but I think it sounds racist,” says one character when another makes a crack about her ethnicity.

Young boys shock their mom (Aniston) by talking about their genitals; a teenage girl embarrasses her widower dad (Sudeikis) by asking him to buy tampons; a lesbian couple (Sarah Chalke and Cameron Esposito) makes a pink “womb” float for a Mother’s Day event—which another character refers to as a “parade of vaginas.”

Are you laughing yet?

Then maybe you’ll titter when a good-ol’-boy grandpa (Robert Pine) addresses his Indian son-in-law (Aasif Mandvi) as a “towelhead,” or when grandma (Margo Martindale) sizes up a situation by asking herself, “I put on a bra for this?”

The large, talented cast is largely wasted with little do but go with the flow of the overly sweetened, sentimental twists and turns, the not-so-surprising surprises and the eventual resolutions and wrap-ups. But the sap eventually sucks all of them under.

Coincidence is one thing, but here, worlds collide like particles in some kind of bizarre cinematic quantum theory, where strands not only cross and overlap, they magically weave into a crazy Mother’s Day movie smock of American flags, a careening RV, a Tao-dispensing clown, soccer, Skype, llamas, teenagers, toddlers, babies, a cute guy in a comedy club, Aniston with her arm stuck in a vending machine and Sudeikis singing “The Humpty Dance.”

And Hector Elizondo, an actor you should recognize if only because he’s been in every movie Garry Marshall has ever made, all the way back to 1982.

I’d love to see what Garry and Hector—and who knows who else—could do with Election Day. Now that could really be fun.

Jesse Owens biopic reminds us of runner and historic 1936 Olympics 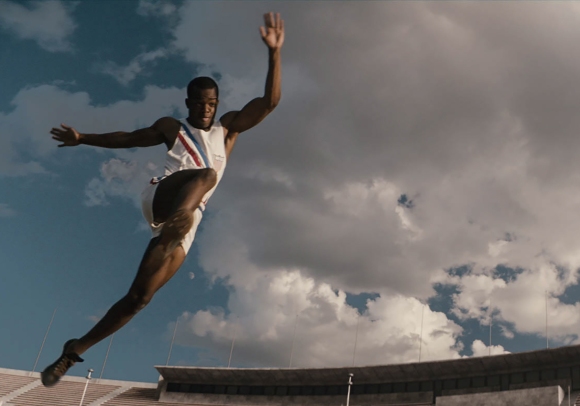 No one had ever seen anyone run anything like Jesse Owens.

The sharecropper’s son from rural Alabama began burning up the track in junior high. By the early 1930s he was setting new championship records for Ohio State University, and in 1936 he wowed the world, where he brought home four gold medals—for track, relay race and long jump—from the Summer Olympics in Berlin, Germany.

Race tells Owens’ tale, and its simple-sounding title packs a double meaning—about his fleet feet as well as the spotlight on him as a black man in a historically loaded moment in time, where he faced discrimination, racism and the pressure to represent his country and his “people.”

In the movie’s opening sequence, as Owens (Stephan James) prepares to leave home for college, his mother touches a scar on his bare chest, the leftover of a childhood tumor that almost claimed his young life. “God spared you for a reason,” she tells him.

That reason, the movie leads us to believe, was to stand up for what’s right, to walk (and run) humbly with your God-given gifts—and to stick it to the Nazis.

In 1936, the movie shows us, the United States was conflicted about whether to participate in the Summer Olympics at all. Germany had won the bid to host the events five years earlier, two years before Nazi Germany came to power. Adolph Hitler’s goal of a blue-eyed, blonde-haired master “Ayran race” was already making nasty international ripples. When a member of the U.S. Olympic Committee pays a diplomatic visit to Berlin to negotiate terms of America’s participation, he sees signs outside the gargantuan Berlin Sports Center reading “No Jews or Dogs.”

Owens was an enormous part of the history of the 1936 Olympics, where his achievements delivered a big black slap to Germany’s smug Nazi face about their so-called racial “superiority.” A subplot about his friendship with their top athlete, Lutz Long, represents the bridges—instead of barriers—of the Olympics’ loftiest ideal.

After the Olympics, the great Owens came home a winner and a new record-setter, but we’re showed how his four gold medals didn’t exactly change the world—for him or anyone else. As the movie and the Black History Month timing of its release reminds us, there was—and remains still—a much longer race to be run.

From Bad to Worse

Things go wrong in ‘Horrible Bosses’ sequel, in more ways than one

If you got a chuckle out of the first one, you’ll probably get a chuckle out of this one. But just because you might doesn’t mean you should. And why don’t you save your titters for something that’s not such a waste of talent, a lazy roll over retreaded gags, and a smutty stroll down a street full of racist, sexist and homophobic jokes?

The first Horrible Bosses, in 2011, set up an initially amusing, over-the-top, screwball comedy: Three hapless schmucks (Jason Bateman, Jason Sudeikis and Charlie Day), each so exasperated with their individual employment situations, were driven to an absurdly extreme measure: a plan to murder their bosses. 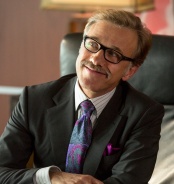 Both Spacey and Aniston, as well as the knucklehead trio of Bateman, Sudeikis and Day, are back in Bosses 2. This time, the disgruntled employees have become entrepreneurs—they’re the bosses now—striking out on their own with a prototype for an all-in-one bathing accessory. But when an unscrupulous distributor (Chrisoph Waltz) makes a play to bankrupt them and take over their operation, they devise their own plan for payback—by kidnapping his insufferably spoiled adult son (Chris Pine) for ransom.

Things go “horribly” wrong, of course—in more ways than one. The plot follows the same basic course as the first movie, down to some of the same exact gags. (Hey, they got a laugh the first time, right?) The humor is beyond bawdy—it’s super raunchy, and so blatantly offensive on so many levels, it almost seems admirable the filmmakers tried so hard to maintain such a consistent tone of tastelessness.

To call it “bathroom” humor demeans a lot of bathrooms, especially in one particular scene with a toothbrush, and in another when the discussion in a sexaholics support group turns to a topic that would be shocking even if it didn’t involve underage children.

Any guffaws these jokes get depend on just how far you think it’s OK to go for a laugh, and how closely you care to look at what you’re really laughing at. I’m not sure in what context a reference to the sexual assault of a hospital patient in a coma, for instance, would come off as funny—but here it’s played just that way.

Jamie Foxx returns as a shady career criminal whose obscenity of a nickname can’t be printed in a newspaper but is repeated dozes of times in the movie, and whose flawed advice the would-be kidnappers once again seek.

The first time around, the bosses were terrible, but the movie wasn’t so bad. This time, the “new” bosses turn out to be awful, too, the movie is a disappointment, and the jokes may make you laugh…but you should feel guilty about it when you do.