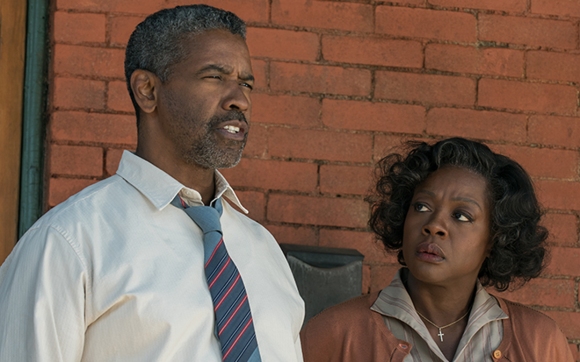 Fences can keep things in, keep things out, make it difficult for people to see what’s happening, and mark lines of division, separation or conflict.

Oscar-winning actor Denzel Washington directs as well as stars in this big-screen adaptation of August Wilson’s Pulitzer Prize-winning 1987 Broadway play, an epic domestic drama about a black family in Pittsburgh in the mid 1950s.

Washington reprises the lead role of Troy Maxson, a garbage collector and former baseball player haunted by his glory days in the Negro leagues. It’s a role Washington also performed on stage in the play’s 2010 Tony Award-winning Broadway revival, alongside Viola Davis, who also returns to her role as Troy’s long-suffering, loyal wife, Rose.

Much of the movie is set in the scrappy, cramped, grassless backyard of Troy and Rose’s modest brick home, in the shadows of the town’s smoke-belching factories, where Troy spends his weekends working on the construction of a wooden fence. It’s to separate his home from the eyesore of the abandoned house next door.

And it’s obviously a metaphor for much more. 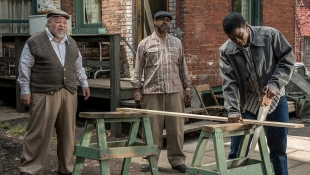 Troy is a fiercely proud patriarch who crows about how much he loves Rose, how hard he works, how he deserves a promotion, and how much he’s done to provide for his family. He boasts about what a great baseball player he was (better than the new black players, even Jackie Robinson), and how he danced with death more than once and lived to tell the tale.

But Troy is a jealous bully to his youngest son, Cory (Jovan Adepo), blocking his promising athletic path to college. He’s stingy and dismissive of his oldest son, Lyons (Russell Hornsby), whose easygoing musical ambition doesn’t seem like “real” work. And when his secretive philandering puts his marriage to the test, the world of which he so loudly proclaims himself to be the center begins to crumble.

In a powerful performance, Washington makes Troy both sympathetic and pathetic, a tragic character of almost Shakespearian proportions grappling with fate, family responsibilities, work, racial injustice and carnal desires. You may not like him, or love him, but Washington makes Troy a force of nature you cannot ignore.

And Davis, too, is formidable; she’s already won a Critic’s Choice award, and she’s all but certainly bound for an Oscar nomination. The emotional, confrontational scene where Rose stands up to Troy, and her wounded pride comes spilling out in a fierce spew of anger, hurt, betrayal, tears and snot, goes far deeper than any of the holes Troy’s put in the yard for his fence posts.

Familiar character actor Stephen McKinley Henderson does a great job in a supporting role as Troy’s longtime friend Bono, who serves as the moral compass Troy mostly ignores. Mykelti Williamson, best remembered as Bubba in Forrest Gump, gives a touching performance as Troy’s brother, Gabe, who came back from World War II with a metal plate in his head—and an otherworldly gift.

Sometimes Fences betrays its roots as a Broadway play, with more words than action. But any stilted “staginess” is offset by its commanding performances—especially by Washington. As the star and director, he’s created a majestic movie with both gravity and grace that feels too big, and too significant, to be fenced in by anything.