‘Apes’ sequel further muddles the line between monkey and man 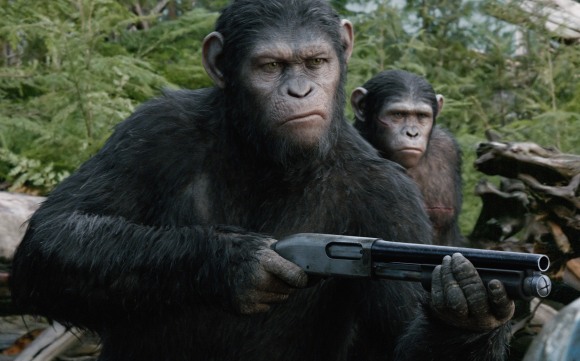 Dawn of the Planet of the Apes

Whose side are you on when battle lines are drawn between people and other primates? The answer may not be as clear-cut as you think, especially in this terrific second installment of the latest Planet of the Apes series, which muddies the moral ground—as well as other things—between monkey and man.

As Dawn begins, we’re reminded that some ten years ago (in 2011’s Rise of the Planet of the Apes), scientific experimentation—and exploitation—resulted in a proliferation of genetically modified apes and began a widespread viral wipeout of the world’s human population.

Now, in a decimated, post-ape-ocalyptic world, a tribe of hunting, gathering apes—who have learned to communicate through sign language, rudimentary writing and grunted speech—rule the densely forested hills outside the city that once was the metropolis of San Francisco. 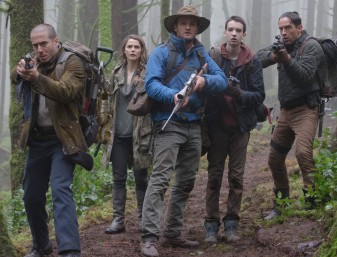 When a small group of humans are discovered deep inside ape territory, it begins an uneasy truce—until dissenting factions on both sides stoke tensions to something much more aggressive.

Director Matt Reeves, whose resume includes the monster movie Cloverfield, the moody vampire saga Let Me In and several episodes of TV’s 1998-2002 series Felicity, draws from all those projects for his talent pool and technique. Felicity star Keri Russell is the movie’s female lead, Kodi Smit-McPhee played the bullied young teen in Let Me In, and several of Reeve’s bravura sequences—like the one of apes on horseback, firing machine guns—are as tense and scari-fying as almost anything you’ll see in any monster movie.

But Reeves and his team of FX wizards also create something above and beyond any of those movies—and most other movies, period—when it comes to blending live-action with digital effects. The apes, created through a process of “motion capture” photography where live actors are first filmed then digitally “overlaid” with their personalized primate characteristics, are nothing short of spectacular. You won’t be to separate pulse from pixels, no matter how closely you look. 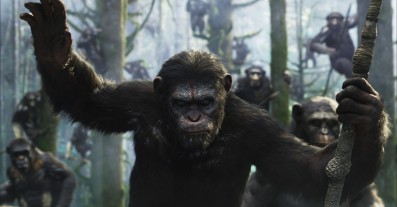 And even though the “human” cast also includes Gary Oldman and Jason Clark (from Zero Dark Thirty), top billing goes to someone you’ll never see, at least out of his digital ape-draping: Andy Serkis, who plays Caesar, the chief of the apes, is the true star of this show. Serkis, who’s also portrayed Gollum in The Lord of the Rings and the biggest ape of them all in King Kong, is a marvel, humanizing Caesar as a diplomat, a father, a husband and a leader who knows that leading can sometimes mean making difficult, unpopular, dangerous and even life-or-death decisions.

With a story that connects to contemporary (as well as ancient) issues and themes—trust, family, betrayal, racism, war, survival—this smart, muscular, action-packed blockbuster is easily one of the summer’s most rousing sci-fi crowd-pleasers. It’s some seriously strong, exceptionally well-made monkey business.