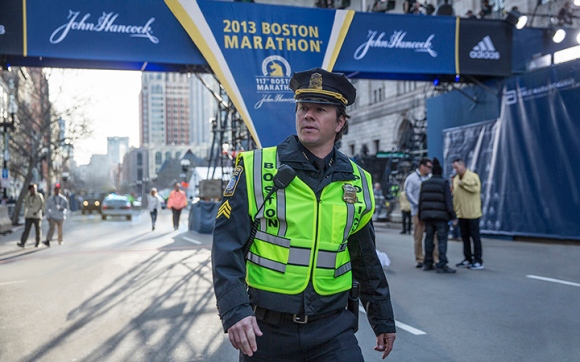 After escaping an exploding oil rig just a couple of months ago in Deepwater Horizon, Mark Wahlberg is now back on the job as Boston police officer, hobbled with a bad knee and thrust into the middle of the 2013 Boston Marathon bombings.

Both Deepwater Horizon, based on the 2010 BP oil disaster in the Gulf of Mexico, and Patriots Day were directed by Peter Berg, who also worked with Wahlberg on Lone Survivor, the 2013 true-life military drama about a team of U.S. Navy SEALs on a mission to capture a notorious Taliban leader.

The two Bergs seem to have a thing for real-life action sagas.

An ambitious, sprawling, detailed dramatization of the events around the bombings that killed three people and injured more than 250 others at the 2013 Boston Marathon, Patriots Day takes its title from the Massachusetts state holiday on which the iconic race has been run for more than a century.

Director Berg, aided significantly by the gritty, street-level, you-are-there cinematography of veteran lensman Tobias Schliessler, packs some serious multiplex meat to the factual framework of the widely reported contemporary event, one that received massive media coverage at the time. He creates a gripping, freshly compelling story by first introducing us to a wide variety of characters that we come to care about, each of whom is intricately woven into the narrative tapestry as the movie unfolds, creating a stirring theme of “Boston strong.” 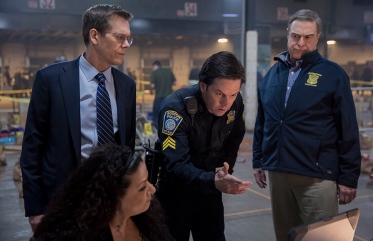 Walhberg gets top billing as Boston police Sgt. Tommy Saunders (a composite character based on several real individuals), who becomes key to the investigation as it becomes a citywide manhunt for the suspects. He’s surrounded by a terrific cast in a spectrum of supporting roles, including Tamerlan Tsarnaev (Termo Melikidze) and his younger brother Jahar (Alex Wolff), who carried the homemade, pressure-cooker explosives in their backpacks before leaving them in the crowd close to the marathon’s finish line.

John Goodman plays Boston Police Commission Ed Davis. Kevin Bacon is FBI special agent Richard DesLauriers, who steps in when the bombing is declared an act of terrorism. J.K. Simmons hovers around the edges as Jeffrey Pugliese, the police sergeant in Watertown, outside Boston, until the fleeing suspects finally arrive there to meet their violent Waterloo.

Other, lesser-known actors portray the movie’s real heroes, like Sean Collier (Jake Picking), the MIT campus policeman who refused to let the terrorists take his service revolver, even after they’d shot him. Jimmy O. Yang (from HBO’s Silicon Valley) plays a young Chinese-immigrant college student whose path fatefully crossed with the bombers after the marathon.

Rachel Broshahan (Rachel Posner on the Netflix series House of Cards) and Christopher O’Shea (Jareth Glover on TV’s Madam Secretary) portray newlywed race spectators who were both seriously injured in the explosions but survived. Their mini-story is one of the movie’s most moving, and bookends its overlay of hope, resilience and community-wide, real-life rebound. 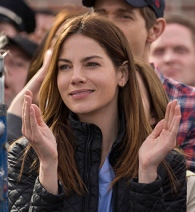 Definitely stay for the epilogue, when you’ll meet some of the real people—including Jessica and Patrick—depicted in the film.

“These images in my head,” Walhberg’s character tells his wife (Michelle Monaghan) in the bombing’s horrific aftermath, “they ain’t goin’ away.” The powerful images in Patriots Day will linger with for with you for a while, too. But so will its bigger, uplifting depiction of a town and its citizens united—healing, tougher than ever and determined to not let the bad guys win—after an almost unthinkable tragedy.

“What do families need more—fathers or a dad?”

That’s the question posed at the beginning of Daddy’s Home by Brad (Will Ferrell), who wants more than anything else to be a dad—because he can’t become a father, at least biologically. Since an unfortunate snafu in a dental office years ago rendered him sterile, stepdad Brad is working hard to become part of the household—and the world—of Sarah (Linda Cardellini) and her two young children.

It’s not easy. And it certainly gets harder when the kids’ real father, Dusty (Mark Wahlberg), shows up—and sets up the “good, old-fashioned dad-off” hijinks of this high-spirited holiday comedy.

Her ex is “crazy and wild: like Jesse James and Mick Jagger had a baby,” offers Sarah. Ever-optimistic Brad is unfazed—at first. “He sounds like a rascal,” he says. “But I don’t think he’s anything I can’t handle.”

That’s before Dusty takes over Brad’s home-improvement projects, his home and even his job, triggering all sorts of comedic shenanigans—dueling bedtime stories, a gonzo backyard tree-house, a visit from “Santa” in April, a fertility-clinic fiasco and a wild motorcycle ride that turns Brad into a wall-piercing projectile.

Ferrell and Wahlberg, who worked together previously in the shoot-’em-up cop comedy The Other Guys (2010), are two very funny guys. It’s nice to see them both back in a PG-13 setting, especially after Wahlberg’s raunchy excursions with his furry, foul-mouthed teddy-bear friend in Ted and Ted 2, and Ferrell’s crude 2015 prison-comedy flop with Kevin Hart, Get Hard.

And it’s good to see them in something this funny. Much credit goes to director Sean (Horrible Bosses 2) Anders and his tight, bright screenplay collaboration with Brian Burns and John Morris, which keeps the laughs coming and works many gags for “overtime” payoff later. Anders also knows how to guide his supporting players—Thomas Hayden Church, Bobby Cannavale and Hannibal Burress—into comedic grooves with just the right harmonic undertones. Keep your eyes peeled as well for L.A. Lakers hoops superstar Kobe Bryant, actor-comedian Paul Scheer, and a cameo at the very end that puts the ideal capper on all that’s come before.

But there’s a soft, sweet spot in Daddy’s Home, too, about parents and kids and the realities of divorce—about how it takes teamwork to make a family, how parenting is hard work and no two dads are the same.

Brad tries to see beneath Dusty’s tough exterior. “I think, in here,” he says, pointing to his heart, “there’s a creamy center.” Daddy’s Home has one, as well, and it gives this rollicking co-parenting comedy a burst of sweet, flavorful feel-good that could make it a new seasonal repeat long after its theatrical run is done.

The bawdy little talking furball is back. Writer-director Seth MacFarlane’s raunchy teddy bear returns in all his crass, computer-generated comedic glory for another round of surrealist stoner silliness with his Bostonian best friend, John (Mark Wahlberg), in this sequel to the $550-million-grossing 2012 hit.

It begins, as many movies do, with a wedding, as Ted (voiced by MacFarlane) ties the knot with his gum-smacking bride, Tami-Lynn (Jessica Barth). Soon, however, there’s trouble in paradise: Ted and Tami-Lynn discover they can’t have a baby, for a couple of reasons—including that Ted, a teddy bear, lacks the necessary anatomical equipment. And trying to adopt creates another problem, which comes to loom large: The legal question of whether Ted is a person or a piece of property.

How you feel about the humor in Ted 2 will likely align with how you feel in general about the work of MacFarlane, whose TV show Family Guy established and enshrined him as a golden boy of rollicking, ribald politically incorrect hilarity. For some, he’s a brilliant, envelope-pushing social satirist. Others lean to the opposite, more “offended” side of the critical spectrum, noting his penchant for crude jokes, scatological humor and the sharp, scathing edges on the blades of his irreverent, “insensitive” lampoonery.

There’s plenty of all of that, however you feel about it, in Ted 2, from the dazzling Busby Berkeley-inspired musical opening credits sequence to the almost nonstop parade of bawdy jokes, celebrity cameos and gurgling bong hits that follow.

I won’t say it’s not funny, and some of it is flat-out hilarious. MacFarlane runs his characters (which include Amanda Seyfried as a newbie attorney who takes on Ted’s “personhood” case) through a gamut of R-rated punch lines and crazily comical setups. A Liam Neeson walk-on, as a grocery-store customer overly concerned about the age-appropriateness of his breakfast cereal, is a total hoot. (Stay for all the credits for the full payoff.) Jay Leno gamely goes along with a joke about gay sex.

But some things seem unnecessarily drawn-out and repetitive, with gags and ploys from the first movie simply recycled or repeated—like a subplot with the creepy stalker Donny (Giovanni Ribisi), who wants to slice into Ted to see what makes him tick. At one point, John yells “Déjà vu!” I hear you, sir!

The Kardashians, rocker Steven Tyler and Harrison Ford all but assuredly won’t like the jokes made at their expense, but quarterback Tom Brady was clearly aboard for his scene, in which Ted and John infiltrate his bedroom for an ill-fated artificial-insemination scheme.

If some of that sounds like the bottom of comedy barrel, perhaps you’ll be a bit more uplifted by Ted 2’s underlying civics lesson about gay rights, the struggle of blacks in America and the inherent dignity of all living things.

Who says tubby, trash-talking teddy bears are all huff, puff and fluff?

The A&E reality-TV series about the Wahlbergs, centered around their family-owned restaurant in the Hingham, Mass., shows a domestic, hometown side to the Hollywood lives of actors Mark and Donnie, alongside their cousin Paul and their mom, Alma. Season one episodes includes various eatery escapades and offsite adventures, including visits from Mark’s fiancé, actress Jenny McCarthy, and Joey McIntyre, his former musical mate in the s’80s “boy band” New Kids on the Block.

Mark Wahlberg headlines the cast in this intense, action-packed tale about a covert mission by four U.S. Navy SEALs in Afghanistan that goes terribly awry when they’re forced to make a moral decision that leads to an enemy ambush. Based on a true story, it’s a powerful, gung-ho, gut-punch drama about brothers in arms, heroism, courage and the sheer will to survive. Bonus content include several behind-the-scenes, making-of features, and an in-depth look at Marcus Luttrell, the real-life SEAL who received the Navy Cross and the Purple Heart for his actions in the mission on which the movie is based.