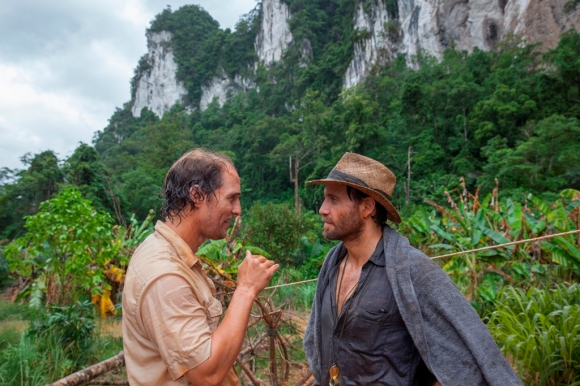 For his latest starring role, Matthew McConaughey is 12 years, a big belly and a world away from his 2005 title as People magazine’s “Sexiest Man Alive.”

He on packed 40 pounds, shaved his head to wear a balding hairpiece, and popped in a mouthful of bad teeth to play Kenny Wells, a plucky, cigarette-huffing, third-generation Reno mineral prospector trying to hold onto the company his grandfather “scratched out of the side of a Nevada mountain.” But the late-’80s recession hits his company—built on the ups and downs of the commodities market—especially hard.

One night, at rock bottom after a bottle of tequila, Kenny has a dream—about gold on the Pacific island of Borneo, and Michael Acosta (Edgar Ramìrez, who played Dr. Abdic in The Girl on the Train), a maverick geologist he once met. Acosta has a wild theory about the fabulous riches to be found beneath the Earth’s “ring of fire.”

So Kenny, chasing his dream, hops a plane to the other side of the globe and partners up with Michael to go for the gold they both think is waiting for them through a rainforest, up a river, beneath a mountain, in a nation controlled by an unfriendly dictator and populated by headhunters.

There’s more to Gold than just a treasure hunt, however. The story’s really only just beginning when Kenny and Michael strike it rich…

The movie is based on the 20th century’s most infamous gold mining scandal, which actually happened in the 1990s and centered on a Filipino prospector and a Canadian company, Bre-X Minerals. You probably never heard about it, unless you happened to see it on an episode of the History Channel’s Masterminds documentary TV series back in the early 2000s.

Bryce Dallas Howard plays Kenny’s wife, who doesn’t really have much to do, except in one terrific scene in a lavish event. Corey Stoll, from TV’s The Strain, plays a smooth-operator investor trying to get a significant cut of Kenny and Michael’s fortune for his brokerage firm. Model-turned-actress Rachael Taylor, Stacey Keach, Craig T. Nelson and Bruce Greenwood round out the strong cast.

Director Stephen Gaghan, whose Syriana (2005) helped George Clooney win an acting Oscar, builds a stylish house of cards, with shades of Scorsese (The Wolf of Wall Street) and David O. Russell (American Hustle), a dash of Boiler Room and even a distant echo of The Sting. As the story zooms along, you get a sense of the mad rush of “gold fever” that sweeps up everyone and everything, especially Kenny.

And what a rags-to-riches rush it is: One day you’re rolling in the jungle muck of mud and malaria, the next you’re having sex in a helicopter, ringing the bell on Wall Street or taming a Bengal tiger. Throw in the FBI, a former American president, Michael McConaughey in his birthday suit, a soundtrack of obscure ’80s tunes by the Pixies, Joy Division, New Order and Richard Thompson, and you’ve got a quite an intoxicating swirl of Hollywood gold dust sprinkled atop a little-known gem from the real-world archives.

“The last card you turn over is the only one that matters,” Kenny tells a magazine interviewer. And his last card, in the final scene of Gold, is a doozy.

Outrageously ambitious, deliriously far-out and epically geeky, director Christopher Nolan’s sprawling Interstellar is a space movie with one foot on the ground and one in the stars, a story of both humanity and the heavens, with a thumping heartbeat driving its spewing intergalactic fountain of dazzling, digitized special effects.

In this mind-bending yarn about gravity, time and the power of love, Matthew McConaughey plays a family-man space cowboy on a mission to save the Earth. As its story unfolds, sometime in the not-so-distant future, our planet’s resources have been all but exhausted; the world’s a big dust bowl. McConaughey’s character, Cooper, a former moon-exploring astronaut, is selected for a top-secret, last-ditch NASA dash across deep space to chase down a probe signal that may possibly signal a new planetary home.

Big problem: The widowed Cooper will have to leave behind his sage old dad (John Lithgow) and his two young children, teenage son Tom (Timotheè Chalamet) and spunky young daughter Murph (Mackenzie Foy). Even bigger problem: Once he takes off, Cooper doesn’t know how long how he’ll be gone—or if he’ll be able to return.

Cooper tries to reassure Murph—he gives her an old-school wristwatch and tells her that whenever she looks at it, she can know he’ll be looking at his, too, wherever he is, up there in space, for however long, until he comes home. Tick-tock, tick-tock.

Nolan, whose other films include the Batman Dark Knight trilogy and the mind-scrambling Inception, sets off an explosion of images and ideas as the tale unfolds both “on the ground” and “out there.” We’re taken through a space “wormhole,” a shortcut expressway compressing and expanding space and time, to a watery planet prone to monstrous tidal waves, where every hour counts for seven years of Earth time, and another that’s so cold, even the clouds are solid ice. We watch as Cooper, whose own aging has been halted by the time-warp of space travel, sees video feeds of his children grown into adults (Jessica Chastain and Casey Affleck)—and bitter that their father has apparently abandoned them, “decades” ago.

Anne Hathaway plays one of Cooper’s fellow explorers—a key role in more ways than one because of her connection to her NASA scientist father (Michael Caine) back on Earth, and also to someone the astronauts will meet on their journey to the outer reaches of the cosmos.

Along the way, we’re introduced to some lofty concepts: Are we alone in the universe? Is it possible to go backward and forward in time, or to make it stand still? Is love a quantifiable force? Nolan lays out a narrative path between Odysseus, Albert Einstein and Buck Rogers, then paints it with bold cinematic brushstrokes inspired by the masters—Stanley Kubrick, Steven Spielberg, John Ford.

It doesn’t always work, but man, is it ever something to see. It gets pretty trippy (and even a bit hokey) in the end, and at nearly three full hours, it’s quite a journey. And this rip-roaring Rip Van Winkle rocket tale is unlike anything else you’ve seen at the movies this year, if ever. Hang on for the ride and you may come out on the other side feeling a bit wobbly and time-warped yourself.

And afterward, you might never look at the tick-tock of your wristwatch the same way again. 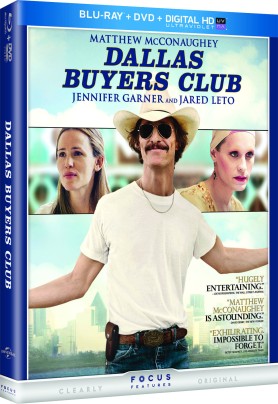 Matthew McConaughey stars as a high-living, homophobic Texas cowboy whose life is turned inside out when he’s diagnosed with AIDS and given 30 days to live. Taking matters into his own hands, he seeks alternative treatments—legal and illegal—and begins his own “buyer’s club” for the life-extending drugs he can’t obtain through conventional channels, eventually uniting an eclectic group of fellow social outcasts. Based on a true story from the 1980s, this powerful, inspiring tale resulted in six Oscar nominations, including Picture, Lead Actor for McConaughey, and Supporting Actor for Jared Leto, whose wrenching performance as the transgendered Rayon has already raked in dozens of awards, including trophies from the Screen Actors Guild and the Golden Globes.