Co-writer, director and star George Clooney’s tribute to the real-life men and women who put their lives on the line to recover and return the cultural treasures stolen by Nazis during World War II is a rollicking, Hollywood actor-packed mash-up of old-fashioned combat “mission” movie crossed with a modern-day message about the casualties of war that extend far beyond the battlefield. Based on a book of the same name by Robert Edsel and Bret Witter, it comes with behind-the-scenes featurettes on the making of the film, the real Monuments Men, and the cast, which also includes Bill Murray, Matt Damon, John Goodman and Cate Blanchett.

This tale of WWII treasure hunters is “monumental” in more ways than one for George Clooney.

To begin with, he’s the star, the director, the writer and the producer. If the movie flies or if it flops, he’ll take the bows—or the boos. And he’s obviously big on the story, based on a 2009 nonfiction book of the same name by Robert Edsel and Bret Witter.

Historically, the Monuments Men were a group of artists, art historians and museum curators commissioned by the American and British armies during World War II to help protect the historic monuments of Europe from Allied bombing. After the war, they fanned out on an even more daunting five-year mission: to recover, catalog and return millions of precious artifacts—paintings, sculptures, tapestries and religious relics—that had been stolen by the Nazis.

The movie takes a few creative liberties with the facts, but it’s mostly true, and the characters are mostly based on, or inspired by, real people. Clooney and his cast mates (Matt Damon, Bill Murray, John Goodman, Cate Blanchett, Bob Balaban, Hugh Bonneville and Jean Dujardin) make a fine-looking international ensemble, even if sometimes the movie’s star power, combined with overly familiar war-movie scenes, sometimes feels like Oceans 11 plus Saving Private Ryan divided by Raiders of the Lost Ark.

The bigger problem, though, is how ironically, in the midst of its “bigness,” so much of the movie seems small. Its series of disjointed, scattered moments never really come together into a larger, dramatic whole. The large cast is confined to playing strictly on the surface—we never really learn anything about any of the characters. The humor is flat, the emotion sappy and the drama tepid; although the Monuments Men are supposed to be on the war’s front lines, they rarely seem to be, or behave like, they’re in any real danger.

The film also treads lightly—too lightly, perhaps—on the terrible human toll of the Holocaust, like in a scene in which the men examine the smoldering frame of a Picasso painting that the Nazis destroyed, then turn to find a barrel filled with gold teeth extracted from slaughtered concentration camp prisoners.

Oh…teeth. Now, back to paintings.

The Monuments Men isn’t going to win any awards, but it does shine a high-profile Hollywood light on a little-known chapter of history—and a fact of wartime looting and cultural pillaging that still happens today. 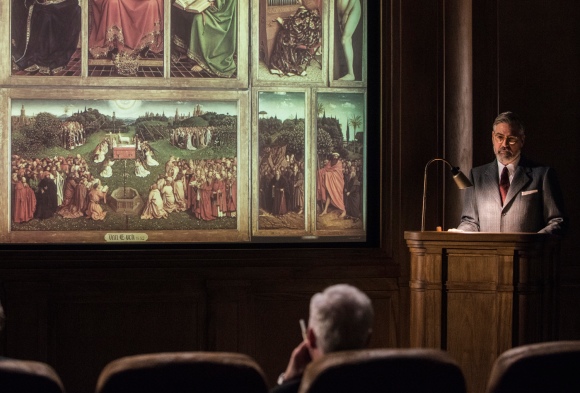 “Was it worth it?” Clooney’s character is asked at the end of the movie. Thirty years from now, his superiors wonder, will people remember, or appreciate, all that went into recovering some 5 million pieces of priceless European civilization?

Thanks to George Clooney’s big, ambitious movie, perhaps now they—we—will. It’s just too bad that, given such a great group of actors and such a monumental story, it doesn’t do a bit of a better job of it.