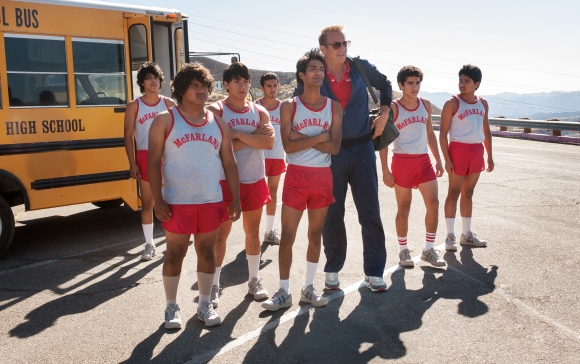 When the folks at Disney were looking for someone to play the coach in this real-life sports drama, they knew who’d be perfect.

Kevin Costner, who turned 61 on Feb. 18, has been in just about every kind of movie, but he’s become a sort of senior statesman of sports flicks, with a career arc that started in the 1980s with baseball (Bull Durham and Field of Dreams) and continued through the ’90s with Tin Cup (golf) and into last year with Draft Day (football).

In McFarland, USA he plays Jim White, a high school football coach who—like Costner—has been around the block a few times. White doesn’t have a lot of patience with pampered jock-star players who don’t put their hearts, as well as their shoulders, on the line and into the game. An “incident” at the beginning of the movie—in 1987—finds the coach, his wife and their two kids on the move, again, transferred from Boise, Idaho, to the small central California town of McFarland, where he quickly discovers that the mostly Hispanic football team is a flop—but man, can those boys run.

That’s because they’re always running home from school to help their parents, or running after school to work in the fields. White sees their potential as a cross-country running team that could compete with bigger, better-funded schools—and possibly even compete at the state level. Never mind that the school has never had a running team, or that White has never coached one.

It’s a pretty basic underdog-tale movie template, but several things about McFarland, USA make it a standout. For starters, director Niki Caro (whose three previous other features include Whale Rider and North Country, both of which received Oscar nods) never cloaks Costner in the glow of a

“white savior” spotlight; he may be the star, but she makes sure the high school athletes shine. This “based-on-a-true-story” movie is their story, too, and the young actors cast as the runners, all newcomers and relative unknowns, give their onscreen characters personality, substance and dimension.

There’s humor as well as heart as White and his family clash with, and ultimately embrace, their new culture. “You got burgers?” White asks on their first—bumpy—night in town before settling for the local restaurant’s only offering: tacos. Maria Bello does a solid job as Mrs. White, even though she’s not given near enough to do, and Morgan Saylor, who played Dana Brody on TV’s Homeland, is lovely as their teenage daughter, Julie, who falls for the running team’s leader (Carlos Pratts).

We meet parents, neighbors, shopkeepers and other town residents. When the camera pans the crowd at the big state meet in the climactic final race scene, we realize that we—like coach White—have come to know, like and respect all these people, who were once unfamiliar, or even threatening.

As the credits roll, you’ll get to meet the real stars of this story: the now-grown McFarland cross-country runners from the team, and the real Jim White. And if you don’t walk out of this feel-good movie feeling better, more inspired and more uplifted than when you came in, proud of what happened back in this small California town in 1987 and proud of the boys and coach who made it possible…well, you must have seen a different movie than I did.