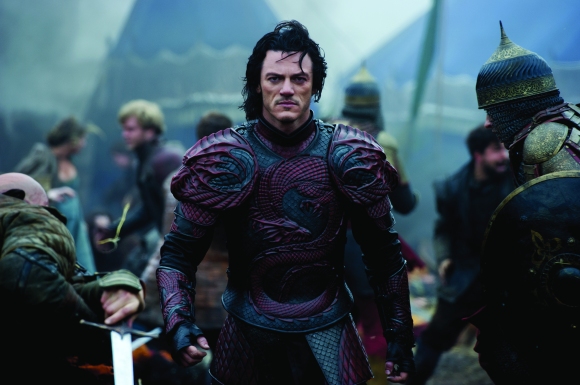 Dracula, the world’s most famous vampire, has spread all across the pop-cultural spectrum, from Bram Stoker’s 1897 Gothic horror novel and actor Bela Lugosi, to goofball cartoons and the inspiration for chocolate breakfast cereal. Historically, he’s been linked—at least in name—to the 15th century Romanian ruler Vlad III, “the Impaler,” whose grotesque signature touch was decorating the Balkan countryside with the writhing bodies of his enemies stuck on poles.

This misguided monster mash of a movie tries to bring the two legends together, in a tale that seems like a 90-minute episode of TV’s Game of Thrones garnished with lots of computer-generated bats.

We meet Vlad (Luke Evans, a “days of yore” veteran of two Hobbit movies, Immortals, Clash of the Titans and The Three Musketeers, plus Fast and Furious 6) after his “impaling” days are over and he’s settled down as a benevolent monarch, carving out a kingdom and making peace with the neighboring Turks that were once his favorite Pinterest subjects. But when pushed again toward an unjust war, he makes a desperate deal to protect his castle, his people, his wife and his son.

That “deal” is the back story of how Vlad became count Dracula, and it involves an encounter in a bat-filled cave with an ancient über-vampire (Charles Dance from Game of Thrones), who offers him a “test drive” of supernatural powers—with a devil of a catch-22. If Vlad can last three days without feeding on human blood, all is well. If not, he’ll become an undead bloodsucker for eternity.

One of the movie’s major misfires is trying to meld “historical” Vlad into “mythical” Dracula. It just doesn’t work—the handsome Evans makes his character seem way too nice to ever be convincing as someone who terrorizes his opponents by putting them up on pikes by the thousands. First-time director Gary Shore never finds the right tone—be it frightful, funny, funky, horrifying, shocking or sexy—that viewers would expect from a modern flick about the most neck-fetish-ed, nocturnal daddy-o of them all. The whole production looks pieced together from murky videogame graphics, cable-TV soundstage sets and leftover Lord of the Rings costumes.

The mostly British cast also includes Dominic Cooper (from Captain America: The First Avenger), Zach McGowan (TV’s Black Sails), Sarah Gadon, and young Art Parkinson (another import from Game of Thrones). The movie ends with a couple of jarring leaps, one of them into what’s reportedly intended to be the beginning of a new modernized “monster squad” franchise based on the iconic beasties of Universal Studios, which also includes the Wolf Man, the Mummy and Frankenstein’s monster.