Move over, James Bond—or get blown off the road. Some new supercool spy guys—and gals—have just laid claim to the multiplex, and they make just about everything that came before them look old, slow, tame and even lazy.

Kingsman: The Secret Service, based on a 2012 Marvel Comics-distributed series, takes the spy game to wildly adventurous, dizzily fun-tastic new heights of both homage and spoofery. Colin Firth, the Oscar-winning British actor best known for his roles in dignified historical dramas (The Kings Speech; A Single Man; Tinker, Tailor, Soldier, Spy) makes his smashing “action-lead” debut as Harry Hart, the top agent in this international intelligence agency of high-ranking, impeccably dressed, lethally trained gents organized in the mid-1850s as a latter-day Knights of the Round Table to “preserve peace and protect life.”

Michael Caine is aboard as the Kingsmen’s top dog; Mark Strong has a key role as his senior officer; and Algerian-born dancer Sofia Boutella makes a memorable impression as the high-hopping villainess Gazelle, who slices and dices foes to ribbons with her razor-sharp prosthetic feet. Mark “Luke Skywalker” Hamill—of Stars Wars fame—plays a college professor appearance is a bit of an inside joke that will delight readers of the comic book, which featured a character with the actor’s name.

The action is frenetic, super-stylized and sometimes gleefully hyper-violent. During fight scenes and other adrenaline-pumping moments, director Matthew Vaughn (Snatch; Lock, Stock and Two Smoking Barrels) and cinematographer George Richmond keep the camera moving, zooming, sweeping, bobbing and weaving, then speeding up and slowing down the film to increase the visual intensity.

The fan-boy comic-book crowd will lap it up, but mainstream audiences will find plenty to like about Kingsman, too—its nonstop plot is full of cheeky British humor, meta spy-movie satire, and jabs at politics, government, celebrities and everyone’s greed for the latest with-it technology. But be warned: It definitely earns its R rating—especially in its final moments, when it dives into a particularly randy joke. It may be just to cap off its playful naughtiness with a real zinger, or perhaps it’s seeking something more profound, a profane parody statement about how spy movies have always “debased” their female characters. 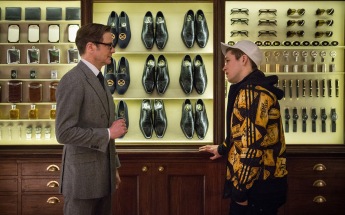 Spy movies have also always been about gadgets and secret-agent do-daddery, and here Kingsman goes all-out: Bulletproof umbrellas, exploding cigarette lighters, shiv-toed shoes, holographic eyeglasses, lethal fountain pens, electrocution signet rings. And the suits! When it comes to fashion, the Kingsmen are the coolest cats around—and, in one of the most extensive merchandise marketing tie-ins of any movie ever, almost anything you see onscreen (suits, ties, shoes and—yes—umbrellas) can be purchased in special Kingsman product lines.

See the movie, buy the suit—and get me one of those indestructible umbrellas!