The Millers: The First Season

Divorced reporter Nathan Miller (Will Arnett) was looking forward to the single life with his co-worker/wingman (JB Smoove)—until his parents (Margo Martindale and Beau Bridges) totally botched up his plans. One of the hottest, funniest new comedies of last fall’s TV season—which also featured guest appearances from Roseanne Barr, Andy Richter, Jeffrey Tambor, Jerry Van Dyke and others—comes packaged with several bonus features, including a behind-the-scenes look at the production and a mock-serious interview with Arnett.

Sharp, smart writing, gonzo wit and the pursuit of special-ness

Since their introduction in Denmark in 1949, Lego construction toys have spread all over the world, across multiple generations and throughout the reaches of pop culture. In addition to almost endless varieties of play sets, characters and components, there are also Lego videogames, Lego clothes, Lego competitions, and Lego amusement parks in Europe, North America and Asia.

Now there’s a Lego movie—and more people have seen it than any other film in America since it opened earlier this year.

Clearly, Legos are immensely popular playthings. But The Lego Movie is also an exceptionally well-done, wildly entertaining piece of family-friendly fare, a rare piece of work that engages both grownups and kids with a sharp, smart writing, gonzo wit and a story that bridges cross-generational audiences. 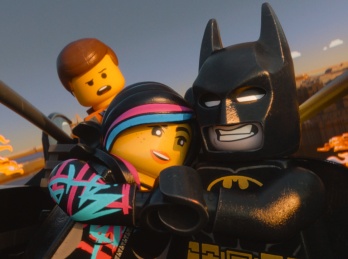 Co-directors and writers Phil Lord and Christopher Miller, whose growing collaborative résumé includes the movies 21 Jump Street and Cloudy With a Chance of Meatballs and TV’s How I Met Your Mother and Brooklyn Nine-Nine, weave themes of creativity, independence and cooperation into a story that runs on a crazy rail of nearly nonstop pop-cultural riffs and satirical references, understated comedic nuance as well as explosively absurd visual magic, and just the right tones of subversive cool for a movie that needs to appeal to children as well as parents.

Early in the movie, Emmet gets in his Lego car, turns on the radio and hears a song, “Everything is Awesome.” It’s meant to be a big supersonic joke, an ironic mantra-like jab about conformity in a place where being mindlessly happy is mandatory. But it’s infectious as all get-out, and it becomes the movie’s theme. (It’s performed by the Canadian indie duo Tegan and Sara and the comedy-rap group the Lonely Island, and produced by Devo’s Mark Mothersbaugh.)

And like the interlocking pieces of the gazillions of Legos it would have taken to make this movie if it weren’t for the digital magic of computer animation, the song just fits. Yep, in this joyous, joke-filled parable about the joy of making stuff, the power of imagination and the pursuit of special-ness, everything pretty much is awesome.