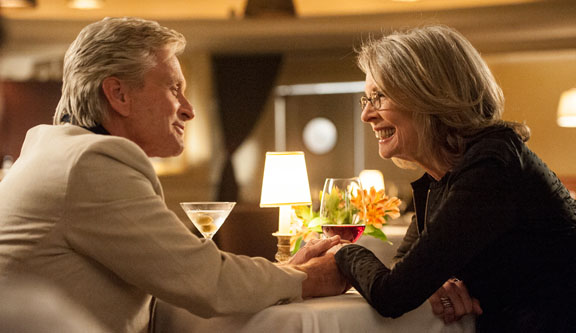 And So It Goes

A paint-by-numbers romantic comedy for the AARP crowd, And So It Goes stars Michael Douglas as a cantankerous Connecticut real estate hotshot, Diane Keaton as New England’s most unconvincing lounge singer, and young Sterlin Jerins (who fled zombies with Brad Pitt in World War Z) as the adorable moppet who brings them all together.

Director Rob Reiner has made some good movies, and even some great ones—This Is Spinal Tap, Misery, The Princess Bride, When Harry Met Sally, Stand By Me. Measured against cult masterpieces and all-time audience favorites like those, a lot of other movies would have a hard time measuring up. But this sitcom-like blob of sentimental geriatric gloop, alas, doesn’t have a chance. 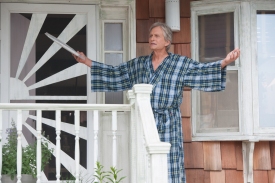 Douglas’ character, Oren Little, is still bitter 10 years after losing his wife to cancer. Now he’s a full-fledged grump and one-man insult factory, shooshing playful kids, muttering ethic slurs to potential clients and pelting stray dogs with his paintball gun. “Do people really let you get away with being you?” asks his next-door neighbor Leah (Keaton), incredulously.

When Oren’s long-estranged adult son shows up, he’s packing a surprise: He’s headed to prison. Can Oren keep his young daughter—the grandchild he never knew existed—until he gets out of the pokey?

If you’ve never seen any other movie or television show, ever, you might wonder where this story is headed. Otherwise, you’ll see every twist, turn, bump and bumble coming long before it gets there, as the new “unwanted” addition to Oren’s life sets him on a fresh, friendlier course—and reignites his romantic spark.

Douglas and Keaton are old pros and they ride out the storm as best they can, but even these two solid Oscar winners can’t put much of a shine on a script full of cheap jokes, lame gags and flat-out embarrassing lines of insultingly dumb dialog.

And they can’t keep director Reiner’s mind out of the gutter. We watch a pooch take a poop, see a little girl react to a dog humping a stuffed animal (“Look Mommy—it’s just like you and Daddy dancing!”), and hear Oren make a crude crack about being confronted with…ahem, genitals…when a little boy changes out of his swimsuit. After a badly botched attempt at lovemaking, Leah rebukes Oren: “I had a dog once who wouldn’t leave my crotch alone, and it was more romantic than this!” 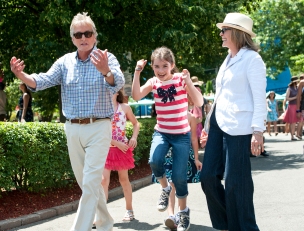 For some people, the pile-on of feel-good mush at the end might divert them enough to think they’ve seen a decent, even uplifting movie. But most will be discerning enough to know they’ve just really just been buried alive by a truckload of artificial sweetener.

In one scene, Oren and his granddaughter discuss a sandwich made of two slices of baloney and one of cheese. That’s actually a pretty good metaphor for this slapped-together attempt at making a quick, no-frills multiplex option for viewers old enough to get senior-citizen discounts.

It’s just that I can’t imagine this baloney, and this cheese, being what anyone wants for a movie meal—at any age.