If you were one of the millions of people who read Chris Kyle 2012 bestseller American Sniper: The Autobiography of the Most Lethal Sniper in U.S. Military History, you might have thought, “That’d make a great movie!”

Steven Spielberg, thought so, too, and wanted to direct it. Bradley Cooper, who’d already ventured into executive roles with his Silver Linings Playbook and American Hustle, agreed, and wanted to produce it—and wanted Chris (Guardians of the Galaxy) Pratt to star in it.

But in Hollywood, things don’t always end up the way they start out. Spielberg decided to take a pass, and Clint Eastwood stepped in. And Cooper decided not only to produce, but also to play the leading role of the highly decorated U.S. Navy SEAL, who killed more than 160 “hostiles” during four tours of duty in the Iraq War—before his life took its own ironically tragic turn. 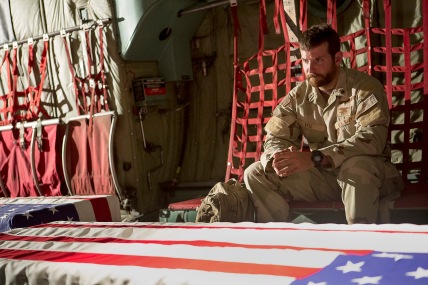 It would have no doubt been different, with a different director and a different leading man, but it’s hard to imagine it being much more successful, dramatically stronger or more emotionally visceral. Eastwood and Cooper both bring their A games for this taut, tense, terse drama that depicts Kyle’s trajectory from Texas good ol’ boy to one of the military’s most effective killing machines, as it also bites down hard on the psychological effects of war, violence and combat that linger long after the fighting is over.

Cooper is an undeniably versatile actor; he’s done serious drama as well broad comedy. But this role is unlike anything he’s ever undertaken, requiring him to bulk up with 30 pounds of muscle and take on a vowel-stretching Lone Star drawl to play Kyle, who knocked around as a rodeo cowboy before enlisting in the SEALs after watching TV coverage of the 9/11 terrorist attacks. 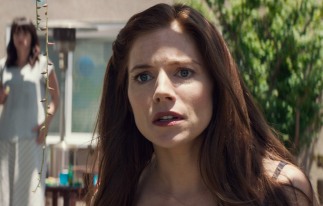 Sienna Miller plays his frustrated wife, Taya, who watches helplessly as her husband wrestles with emotional demons she can’t fathom each time he returns home from a tour.

Eastwood, 84, is a Hollywood icon best known as for his portrayal of a “hall of fame” of iconic cowboys, cops and other classic characters—but he’s also directed more than 30 movies, beginning back in the early 1970s, for which he’s won two Oscars.

Working with his longtime cinematographer Tom Stern, he sets up every shot with solid, no-nonsense precision. Every detail feels right: the paint on the scope of Kyle’s rifle, worn away by thousands of minute focusing adjustments; the makeshift U.S. outposts on the outskirts of Fallujah or Sadr City, where the plywood on the barracks for the troops looks so fresh you can almost smell it; the quick red splatters of blood, which splash across the bleached-out, blanched background tones like crimson punctuation marks, whenever Kyle’s aim is true.

Kyle’s reputation as a deadly marksman makes him feared among the Iraqi opposition—and highly valued as a trophy. Other snipers, including one known as Mustafa, have their sights trained on him. And then there’s a shadowy terrorist henchman, the Butcher, whose torture instrument of choice is a power drill. Be warned: There’s one particularly harrowing scene, involving an hysterical Iraqi family, whizzing bullets, dueling snipers, Kyle’s wife on a cell phone, a growling dog, and the Butcher and his drill. Eastwood doesn’t rub your nose in it for any longer than necessary, but it’s a terrifying reminder of atrocities of war.

“It’s a heck of a thing to stop a beating heart,” Kyle tells his young son, taking him on his first hunting trip, making him understand that killing anything is not to be taken lightly. Is American Sniper pro-war or antiwar? Is a sniper a hero, or just a soldier doing his lethal job? Where’s the line between civilization and savagery during wartime, and what’s the price of walking it? Can there ever be enough good to overcome evil? Eastwood wants viewers to watch, think and decide. American Sniper aims for entertainment as well as something even deeper, and hits its mark.

One thought on “Bull’s-eye”