To Grandma’s House We Go

Kids get more than milk and cookies in frightening, funny ‘Visit’ 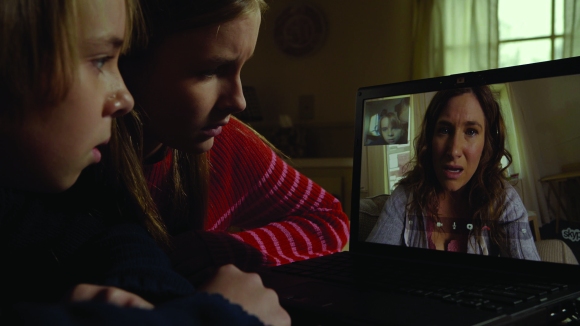 Old people sure can be odd—and sometimes scary—to young ‘uns.

Director M. Night Shyamalan riffs on that generational rift, with frightening and sometimes very funny results, in this tale of two teenage siblings sent to spend a week in rural Pennsylvania with the grandparents they’ve never met.

As their divorced mom (Kathryn Hahn) departs on a cruise with her new boyfriend, Becca (Olivia DeJonge) and her younger brother Tyler (Ed Oxenbould, from Alexander and the Terrible, Horrible, No Good, Very Bad Day) ship off via train to get to know her estranged parents, whom she hasn’t seen in nearly 20 years.

Nana (Tony-winning Broadway actress Deanna Dunagan) and Pop-Pop (Peter McRobbie) are a bit strange, all right. She walks, runs and crawls around at night all ghost-like, in a white nightgown—and she projectile vomits on the floor and claws the walls. He thinks strangers are watching him, dresses up for a costume party that never happens, and squirrels something away in a shed behind the house.

Becca, a budding filmmaker, captures everything on camera for the movie she’s making about her mother’s childhood and the difficult relationship she had with her parents. As such, Becca’s movie becomes much of our movie, as we watch her “(found) footage” as she or Tyler are shooting, viewing or editing it. 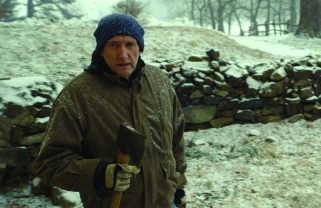 Writer/director Shyamalan has given us suspenseful movies before—Unbreakable, Signs, The Sixth Sense, The Village, The Lady in the Water. It’s easy to pick up here on some of his familiar themes: broken families, the mystical power of storytelling, otherworldly creatures, the “magic” of water. Becca’s movie-within-the-movie feels almost like a tribute to the director’s craft itself, with Becca and Tyler using filmmaking phrases like mise en scene and denouement. A deranged game of the board game Yahtzee veers for a moment into Quentin Tarantino territory. Beneath its carefully crafted scares, this is a very artful movie about movies, a story about stories, and a tale of a tale—with a trademark, last-minute Shyamalan twist.

The Visit has some truly hair-raising scares­—and some genuine laughs. Many of the chuckles come from young Tyler, a wannabe rapper who uses female pop singers’ names instead of curse words

(“Oh, Shakira!”) when he’s in need of expletives. As the grandparents, Dunagan and McRobbie are old pros, TV and film veterans who keep the movie’s nasty, bone-chilling surprises closely guarded secrets until it’s time to spring them, when The Visit shifts from creepy to crazy and Nana and Pop-Pop’s home becomes a modern-day, Hansel-and-Gretel house of horrors.

You’ll squirm when Becca crawls deep inside the kitchen oven. You’ll gasp when Tyler ventures into Pop-Pop’s shed. And after the most outrageous, hilariously icky gross-out gag you’ll see in any movie this year, you’ll never look at an adult diaper the same way again. Don’t say I didn’t warn you.