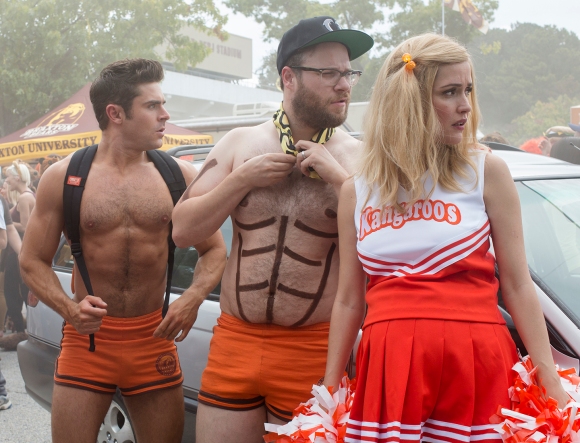 When a sorority moves in next door to a family trying to sell their house, it’s trouble.

That’s the quick premise, but this ribald new comedy—a sequel to the 2014 hit—puts a fresh, topical spin on its predecessor, while reuniting its cast and hewing mostly to its original manic framework.

Mac (Seth Rogen) and Kelly (Rose Byrne), now the parents of a 4-year-old daughter (Elise Vargas) with another on the way, have sold their suburban house…sort of. It’s in a 30-day escrow hold, which means the buyer has a month to decide—or back out. That’s troubling news, because Mac and Kelly have already bought another house, no strings attached. 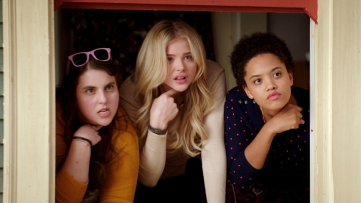 It’s especially troubling when a sorority roosts in the vacant, broken-down fraternity house next door. But not just any sorority: The young women of the freshly minted, renegade Kappa Nu (led by Chloë Grace Moretz, Kiersey Clemons and Beanie Feldstein) have split from the campus Greek system, fed up with the leering bros-before-hos sexism of fraternities and the prissy, priggish constraints of the established sororities. At Kappa Nu, it’s weed, wild parties and full-throttle fem-centric fun, all the time.

And look who’s come aboard as their advisor: Mac and Kelly’s old next-door fraternity nemesis, Teddy (Zac Efron). But the girls increasingly see Teddy as out of touch, and his old college frat-boy crew (including Dave Franco, Jerrod Carmichael, and Christopher Mintz-Plasse) have all grown up and moved on faster than him.

Where does Teddy fit in? It may be where you—and he—would least expect…

How all these comedic strands weave together and work is in the hands of director Nicholas Stoller, who also steered Get Him to the Greek, the marvelous Forgetting Sarah Marshall and the original Neighbors. He once again has a great cast, down to the cameos by Lisa Kudrow (as a deadpan dean), Selena Gomez (as a rival sorority president) and Kelsey Grammar (as a pleading parent). 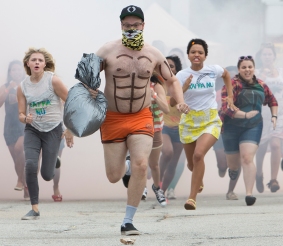 The heist scene is “high” on action.

Rogen, who also collaborated on the screenplay, makes sure to push his pro-bong agenda with plenty of pot jokes, including one extended weed-heist sequence that feels like an action-movie parody. But look through the haze (and the randy, raunchy jokes) and you’ll find something else: a movie with empathetic messages about acceptance and inclusion, gender rights and sexism, hypocrisy and double standards, mothers and fathers and daughters, loving families, girls who grow up to become young women, and growing up in general.

And in the middle of it all is its secret weapon, the former High School Musical star Efron, who at the age of 28 has proven his adaptability in a wide variety of roles, particularly comedy. As Teddy, he brings something to the part richer and fuller and much more dimensional than what was flat on the page, an ache to belong and to be “valued” that resonates beyond the script’s jokes about dope, crazy pranks and a raucous rift between crazy college kids and cranky “old people.”

Neighbors 2 is the rare sequel that grew up with its audience, its subject matter and its subjects—and got even funnier and more meaningful in the process.