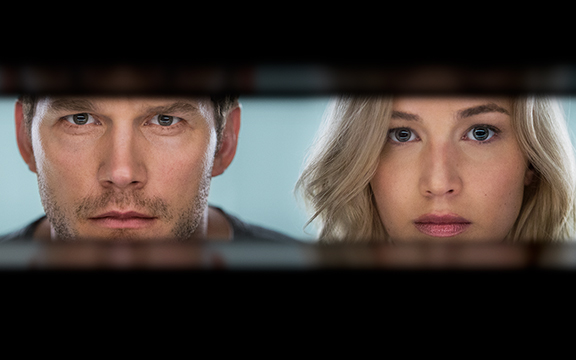 A gigantic rocket ship on a 120-year journey to a faraway space colony has a glitch mid-route, mistakenly waking up one—and only one—of its 5,000 passengers from suspended-animation hibernation early.

And once your personalized alarm clock goes off on this intergalactic cruise, there’s no way hit the snooze and go back to deep sleep—you’re up.

That’s what happens, alas, to Jim Preston (Chris Pratt), who awakes to find himself all alone on a big, spinning luxury cruise liner of a spaceship auto-piloted to a lush new world, set to arrive…well, a couple of decades now after he’s dead. 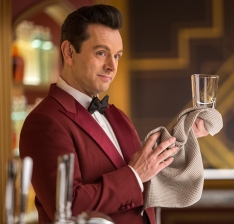 Jim at first explores the ship and avails himself of all its amenities (holographic dance-offs, no lines in the food court, great robotic restaurant service). He finds a “companion” in the lounge’s android bartender, Arthur (Michael Sheen from TV’s Masters of Sex). But he’s smitten when he catches a glimpse of one of the other hibernating passengers, a writer named Aurora Lane (Jennifer Lawrence).

Weighing the moral and ethical considerations against his own crushing loneliness, Jim eventually makes the decision to rouse Aurora from her hibernation—without telling her he did so. What she doesn’t know can’t hurt her, right? Right???

The starship in Passengers runs on a whirring nuclear reactor. But the movie itself is powered by two of Hollywood’s hottest, most likeable, bankable stars, and the film’s storyline bends around them and the heat they generate. There’s a genuinely creepy, unnerving nugget of a tale—of obsession, desperation and survival—in Passengers about what might happen under the futuristic circumstances it depicts, but it mostly gets lost in the sweet, sci-fi mush—and rush—of its intergalactic romance. 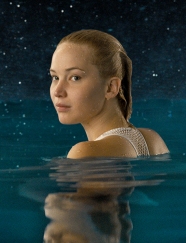 Things get better for Jim, then worse—much worse. He grows a beard. He shaves off his beard. Aurora and Jim walk among the stars—a big-ticket “shore excursion”—and make out in spacesuits. Aurora laughs. Aurora cries. Aurora rages. Aurora attacks Jim. Aurora swims—a lot. She gets trapped in a big, floating water “bubble” when the ship’s artificial gravity goes out.

Norwegian director Morten Tyldum, nominated for an Oscar for The Imitation Game, creates a space-station world, and an atmosphere, that feels like a cross-pollination of a Carnival Cruise, 2001: A Space Odyssey, Robinson Crusoe and The Twilight Zone. He pays attention to small details and never lets his “big” space movie get overrun and overblown with special effects.

Another big-name star, also awoken early by a system malfunction, makes a late appearance, mainly to sound the alarm that things have really taken a turn for the worse. Can Jim and Aurora right the ship—and realign their own stars?

“Lay some bartender wisdom on me,” Jim implores Arthur at one point. “I feel like I’m lost in space here.” After riding along in Passengers’ interstellar love boat for two rocky hours, you may agree that some course correction might have indeed been helpful—especially when this rocket lands on one of the cheesiest spaceball wrap-up endings of anything this year.