It’s Good To Be King

It’s good to be king.

King Kong, the movie mega-monkey, has reigned since his debut in 1933, when he first scaled the Empire State Building, angrily batted biplanes out of the sky—and carefully cradled a beautiful young actress (Faye Wray) in his giant paw.

Over the decades, Kong’s tale would be retold in various remakes, sequels, spinoffs, parodies and even a Saturday morning cartoon. It became the basis for theme park thrill rides and a stage musical.

It’s probably safe to say that the legacy of the king has been watered down a bit by men in monkey suits, cartoonish buffoonery and other pop-cultural permutations of his pure, towering, primordial badass-ery. Which is why director Jordan Vogt-Roberts’ exhilarating new version comes as such a jolt of super juiced-up, monster-movie energy, restoring some of the raw edges of wild, wooly excitement to the Kong saga while giving it a fresh new, retro-rollicking spin.

Its premise is familiar, basically: A team of explorers ventures to an uncharted, forbidding Pacific archipelago, but they encounter much more than they anticipated.

The original Kong story was set in the era of the Great Depression, but Skull Island unfolds in 1973, just after the end of America’s involvement in Viet Nam. That timetable is more than just a colorful detail, because the theme of war—and warfare—is vital to this version of the story.

A rocking soundtrack, with tunes by David Bowie, Creedence Clearwater Revival, Black Sabbath, the Hollies, Jefferson Airplane and Iggy Pop, deepens the groove of the era. If you’ve never seen a colossus ape on a helicopter-swatting rampage while the soundtrack is blaring Ozzy Osborne singing “Paranoid,” well, trust me: It out-apocalypses anything from Apocalypse Now.

(A snippet close to the end of the film of British singer Vera Lynn’s “We’ll Meet Again,” a famous WWII ballad, hints that we might not have seen the last of Kong, and some of his mega-monster ilk, a suggestion definitely reinforced if you stay through the closing credits.)

Samuel L. Jackson plays Preston Packard, a U.S. military commander itching for one final mission, still smarting from America’s humiliating retreat in Southeast Asia. He’s accompanied by crackpot conspiracy theorist Bill Randa (John Goodman), who has convinced a reluctant U.S. senator (Richard Jenkins) to bankroll the exploration of the island before the Russians can find it—in case there’s anything of value there.

But what is Randa really looking for in this place where “God didn’t finish creation… where myth and science meet”? 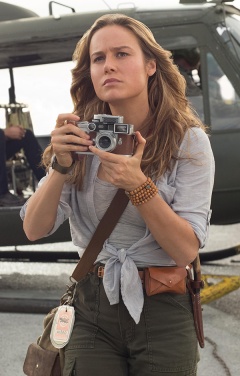 It’s a motley, multi-ethnic crew, all right, and a perfect “movie mix” when they all end up scattered, spread and separated across the island. Don’t get too attached to anyone; the number of casualties gets pretty high, pretty fast, and keeps climbing.

The original King Kong, and its remakes in 1976 and 2005, had overtones of imperialism and outright racism—of American and British explorers going to “exotic” parts of the world in earlier ages of exploration, and taking away whatever they found of interest. This one has a not-so-subtle message, one that echoes down the ages through today, about swaggering American military might, unwanted and unwarranted interventionism and solving problems with bullets and bombs.

“Sometimes the enemy doesn’t exist until you go looking for one,” one character notes.

Kong, understandably, doesn’t exactly meet his new guests—and their assault of shrapnel, napalm and machine-gun fire—warmly. And after it’s over, you know this is no Saturday-morning cartoon, or a joy ride of amusement-park thrills and chills. It’s full-on monster mayhem. 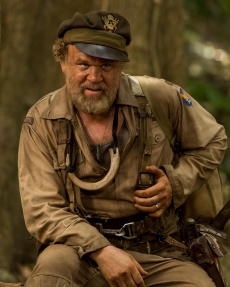 And for the survivors of that initial encounter, Kong isn’t the only unpleasant surprise the island has in store. There are gigantic octopuses, towering jungle spiders, screeching pterodactyls, massive lizard-like “skull crawlers” and other mutated hazards lurking around every cinematic corner. It’s a very, very dangerous place, and you never know what may pop out of the weeds, the water, the sky, the mist, the ground or the trees.

Eventually, you’ll meet Hank Marlow (John C. Reilly), a pilot who’d been living on the island—with its indigenous people—since his plane was shot down during a WWII dogfight with a Japanese Zero (depicted in the movie’s boffo opening scene). His character provides some well-calibrated comic relief, but he and his poignant story also become the beating human heart of the movie.

It all adds up to a fantastic, rip-roaring, tropical-island romp. You get to see plenty of Kong, and he’s a fine beast, indeed—a noble savage, a tragic hero, the fierce defender of his home, the “last of his kind.” He “speaks” only in grunts, growls and huffs, but his message is loud and clear: Why can’t everyone just leave him alone and let him do his thing—which, it turns out, might just be pretty dang important in the bigger, grander scheme.

One of the movie’s most interesting new angles is how it uses its central female character, Brie Larson’s photographer, as a revisionist homage to the other females who’ve played “opposite” Kong. Her gutsy, earthy Mason Weaver is no swooning Faye Wray. But she nonetheless is the only character to connect on an emotional level with the “beast.” And in the thrilling climatic scene, which takes place not on top of a skyscraper but in a river, Kong battles a monstrous skull crawler and Weaver is caught in the fray—and is eventually cradled, delicately, doll-like and unconscious, in Kong’s massive paw.

When you’re the king, some things never change.