Hollywood loves heroes, and this film offers up a real-life pantheon

When I was a tyke, I had a Little Golden Book and a record about Smokey the Bear, the forest-fire-prevention mascot who could “find a fire before it starts to flame.”

There’s a bear at the very beginning of Only the Brave, but it’s certainly not Smokey—it’s a blazing, charging beast made out of fire itself, barreling through a hellish nightmare of burning trees.

That bear of fire haunts the dreams of Eric Marsh (James Brolin), the grizzled supervisor of a group of elite firefighters in Prescott, Ariz., known as the Granite Mountain Hotshots. Marsh calls the burning bear “the most beautiful and the most terrible thing I’ve ever seen.”

The beautiful, terrible specter of fire hangs heavy over this rousing true tale, which recounts the heroic exploits of the Prescott firefighters, which lost 19 of its 20-member crew while battling a 2013 wildfire northwest of Phoenix, near the town of Yarnell. It became one of the deadliest wildfires in American history.

Hollywood loves heroes, and Only the Brave—based on a magazine article in GQ—offers up a real-life pantheon, one made even more timely and resonant by the wildfires currently ravaging California. Director Joseph Kosinski spends most of his movie building the story of the men who made up the Hotshots, how they became a tight-knit team and the matter-of-fact business of fighting fire. We know the tragic event, which defined the Hotshots’ legacy, is coming—but before it does, there are other fires to put out, in the mountains and at home. 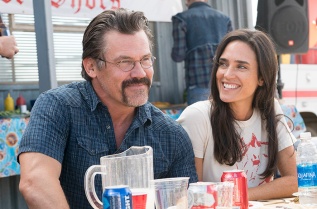 We get to know the firefighters mainly through a handful of central characters in its larger ensemble cast. Brolin has seasoned into a fine actor in almost any role, and he plays supervisor Marsh with a mix of toughness and weariness that reflects the years he’s put into a dangerous, taxing, extremely physical job. The toll it continues to take on his relationship with his wife, Andrea (an outstanding Jennifer Connelly), is obvious.

“Do your John Wayne thing,” she tells him before he packs up once again to head into the hills and face down the fire he calls “the bitch.”

Miles Teller is Brendan McDonough, a pot-puffing stoner screw-up who enlists with the Hotshots in a last-ditch effort to get his life in gear after he finds out he got a girl pregnant (Natalie Hall—she was young Colby Chandler on All My Children 2009-2011) and he’s about to become a father. The others playfully haze him as the rookie, calling him “Puke” and “Donut,” but he eventually earns their acceptance and their respect.

Taylor Kitsch plays Christopher McKenzie, whose hapless search for a girlfriend becomes a running joke. As the Prescott fire chief, Jeff Bridges gets to flex his musical mojo in a nightclub scene by singing the classic cowboy chestnut “Ghost Riders in the Sky.”

Director Kosinski, who demonstrated his expansive visual flair in the sci-fi flicks Tron Legacy (also with Jeff Bridges) and Oblivion (with Tom Cruise), also finds the spellbinding imagery throughout this emotional, character-driven story. Fire races across a mountainside, like an invading army. Blazing trees tumble off a cliff, then explode in flashes of sparks and cinders. A lone deer runs alongside a wall of flame, looking for an escape route. A helicopter hovers in super slo-mo above a swimming pool, siphoning out water. Firefighters in gear move through the trees with military-like precision, looking like a centipede inching its way along.

And the movie shows the hard, dirty work and tools of the trade that go into firefighting—it’s a lot of digging, chopping, cutting and clearing. And much of it is “fighting fire with fire,” setting smaller fires to rob a bigger fire of fuel. But all of it involves putting lives on the line and working in the danger zone, a place where a shift of the wind or a change in temperature can mean destruction—or death.

“There are lots of other things you could do that aren’t so dangerous,” Brendan’s mom tells him.

Hollywood loves heroes, and we’re told they’re made, not born. And as this moving, heart-tugging movie about the Granite Mountain Hotshots reminds us, sometimes they’re forged by fire.