In 42, he starred as Jackie Robinson, the first African American to play pro baseball. He was the Godfather of Soul, James Brown, in Get on Up. In February, he’ll step into the spotlight as Marvel’s Black Panther, the first black superhero to get his own movie.

And he puts the Marshall in Marshall as Thurgood Marshall, the first black justice of the United States Supreme Court, in one of the early defining cases of his career.

We meet Thurgood in the early 1940s as a young attorney for the N.A.A.C.P. in Hugo, Okla., dispatched to Bridgeport, Conn., to represent a black man, Joseph Spell (Sterling K. Brown from TV’s This Is Us), accused of raping and attempting to murder a wealthy white woman (Kate Hudson).

As an out-of-state attorney, Marshall must enlist the aid of a local lawyer—a legal technicality—in order to work the case. He partners with Sam Friedman (Josh Gad), a whiz at insurance and accident cases but zero experience in criminal law.

This being the 1940s, and the case being a “negro” accused of “ravishing” a white woman, the climate in Bridgeport isn’t exactly welcoming to Thurgood. The crusty judge (James Cromwell) begrudgingly allows Marshall to accompany Friedman in the courtroom, but bans him from speaking, arguing or examining witnesses.

After early years of forgettable movie comedies (unless you count Eddie Murphy’s Boomerang or Tim Meadows’ The Ladies Man as milestones—and I’m guessing you won’t) and later TV, director Reginald Hudlin makes his first big-screen drama in a fairly old-school, traditional mode. Marshall is essentially a courtroom showdown, with the story spinning around the odd-couple pairing of Boseman and Gad’s characters, the difficult circumstances in which they have to work and the high-pitched racial tensions and prejudice of the times.

And of course, the question: Did Joseph Spell do it?

There are flashbacks and recreations, from various characters’ points of view. Both Thurgood and Friedman—who is Jewish—are harassed by local thugs. Marshall gathers evidence and, as Friedman’s “silent partner,” gives him a crash course in the basics of criminal law and courtroom procedure. 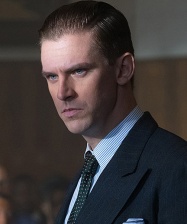 Legion TV star Dan Stevens, who played the Beast in Beauty and the Beast, plays a real-life “beast,” a smarmy defense attorney. Keesha Sharp (Trisha Murtaugh on TV’s Lethal Weapon) is Marshall’s supportive wife, Buster. And fans of Law & Order: Special Victims Unit, as well as the Chicago P.D./Med/Justice franchise, will recognize Sophia Bush, who plays police detective Erin Lindsay in all those shows. She has one scene as a woman in a bar who provides Thurgood with an observation that becomes a case breakthrough.

The movie looks handsome and polished, but the production values are just a little too tidy. The automobiles all appear to be restoration-shiny, and everyone is dressed to the nines, like they just came…well, from the wardrobe department. Nothing about Marshall really looks or feels lived-in.

And modern audiences, with appetites primed by violent, graphic, gory TV crime procedurals, might not have the patience for the more stately, dignified pace of Marshall. It’s closer to Perry Mason than How to Get Away With Murder.

Brown gives a powerful standout performance as Spell, a character who becomes the heart and soul of what the movie is truly about—a black man seeking justice in a white man’s world, in the grinding gears of a white man’s system, and fearing for his life, no matter what he says. The film’s resonance today with themes of racial division and ugly displays of hate and bigotry are impossible to miss.

Can a black man get a fair trial with an all-white jury in Bridgeport, a gaggle of white reporters asks Marshall. Can blacks expect to treated fairly at all? “The Constitution was not written for us,” Marshall tells them. “But we’re gonna make it work for us.”

In one scene, Marshall counsels Spell about a plea deal he’s been offered, in a conversation couched in a discussion about the slavery in both their family’s pasts. Spell recounts a moving story about his grandfather fighting for his freedom, and Thurgood spurs him to never stop fighting himself.

“We’ve got weapons we didn’t have before,” Marshall tells him. “We’ve got the law.”

During Marshall’s 24-year tenure at the U.S. Supreme Court, beginning in 1967, he would argue more than 30 cases, prevailing in all but three. This feel-good biopic reminds us of a formative chapter in the life of a lifelong crusader—for civil rights and justice, for African Americans and all—who never gave up the fight.