I, Tonya, the ripping, rollicking tale Tonya Harding—the most colorfully controversial figure in the history of figure skating—begins by explaining that what we’re about to see is based on “wildly contradictory, totally true” interviews with everyone involved.

Actually, it’s based on mock interviews with actors portraying everyone involved, and the fake-doc format weaves feisty, she-said, he-said threads into the deliciously dark, twistedly comedic biopic drama that follows.

And it’s all true—depending on what you hear, and from who.

In an absolute knockout performance, Margot Robbie stars as Harding, who was banned for life from professional skating after pleading guilty for her knowledge of a plot to sideline her rival, Nancy Kerrigan, leading into the 1994 Olympics. 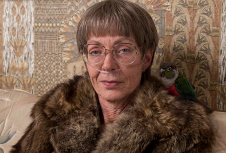 Robbie, after a long haul of standout supporting roles—in films like Goodbye Christopher Robin, Suicide Squad, The Wolf of Wall Street and The Legend of Tarzan—finally gets the lead in a movie that she completely owns. She plays Harding beginning in her teens in rural Portland, Ore., where she’d been driven since childhood (and played briefly by McKenna Grace) to rule the ice by her mom (an awards-worthy Allison Janey), a smoke-breathing, cigarette-puffing, profanity-spewing beast who abuses her both physically and psychologically. 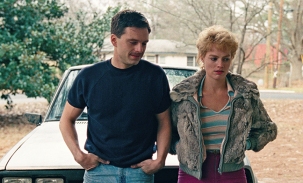 Sebastian Stan as Jeff Gillooly with Robbie as Tonya Harding, early in their soon-to-become-tumultuous relationship.

Sebastian Stan gives a terrific performance as Jeff Gillooly, the older guy Tonya meets and marries. He’s a local loser, a dim-bulb doofus with a mustache, and he abuses her too. They scream, fight and smash up the place. Tonya leaves him, comes back, kicks him out; they break up, get back together, break up again—a toxic circus of domestic co-dependency built on the crumbs of self-esteem from her crushed childhood.

But she channels his rage, her hurt and her bruises into even more focus—and ferocity—in the rink, where she perfects the triple axel, a midair, spinning wonder of aerodynamics. Considered the most technically difficult of all skating maneuvers, it becomes her signature.

And it takes her all the way to the Olympics.

But Harding had never been anyone’s darling, and she has trouble getting her footing on the world stage. She’s a ballsy, world-class skater, for sure, but the judges won’t give any breaks to someone who wears gaudy homemade costumes and does her routines to ZZ Top. In a competition that likes to think of itself as refined and high-class, Tonya is considered low-rent and white-trash.

It’s not just about the skating, one judge reluctantly levels with her. It’s also about “presentation.”

At the U.S. Figure Skating Championships leading to the 1994 Olympics in Norway, Gillooly, by now her ex-husband, decides something needs to be done. The movie refers to it as “the incident.” It begins as one thing, but becomes something else, and results in Kerrigan (Caitlin Carver) getting whacked in the leg by a thug hired by one of Gillooly’s friends (Paul Walter Hauser from TV’s Kingdom). 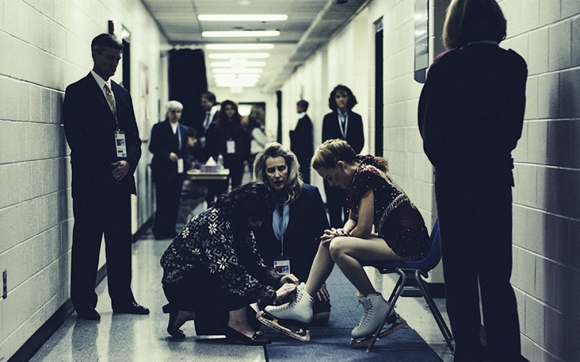 Harding and Gillooly at first feign ignorance and innocence, but soon enough, the whole crazy house of cards collapses, burying them underneath.

Director Craig Gillepsie, whose previous films include the Disney baseball flick Million Dollar Arm and Lars and the Real Girl, juices and gooses this wild joyride along the ripe, rich underbelly of its fractured, funky, fast-paced underdog tale. With dark humor, ruffian violence and doofus characters planning a caper that goes south, it sometimes feels like the Coen Brothers spinning a Fargo riff with Goodfellas seasoning. The camera, like the story and its players, is constantly on the move; as with the truth about what happened, it’s hard to nail down.

And Robbie, as Tonya, is a marvel. She spins, she twirls, she soars. She serves up a magnificently smudged, grandly sympathetic version of a footnote figure in American sports lore that digs deep into the dirty, damaged roots beneath the tabloid headlines that rocked and shocked the world two decades ago.

In her triumphant portrayal of the ice princess now frozen forever out of her castle in I, Tonya, we get both—and the truth, too, whatever it is, somewhere in there.