Some people take their games seriously.

Like Max (Jason Bateman) and Annie (Rachel McAdams), a couple who met at bar trivia night, got married and now convene regularly with friends for highly competitive weekend evenings of charades, Pictionary, Jenga and other parlor classics. 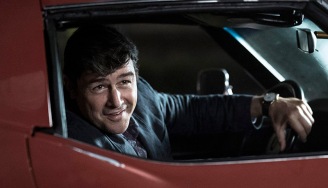 It’s all fun and games until Max’s rich, older, cooler brother, Brooks (Kyle Chandler) roars up in his bright red Stingray hot rod and gets an idea to take the next game night to an “epic” new level at his suburban palace across town.

For Brooks’ game night, he ups the ante considerably with a faux kidnapping, “bad guys” who’ve been hired to fake-abscond with one of the players, and a manhunt. The other players will have to figure out where the abductee has been taken, and the winner will get a big prize: the Stingray.

But something goes terribly wrong—the bad guys who show up really are bad guys, they really do kidnap someone (Brooks), and game night gets really, really serious.

Game Night is a subversively sly, hot-wired action-suspense comedy caper with a screwball scaffolding of Rube Goldberg-ish surprises—for the characters, as well as the audience—until the very end. Screenwriter Mark Perez’s clever, zinger-filled script is full of smart, sharp, rat-a-tat pop-cultural riffs and the kind of connective-tissue dialogue that makes characters feel like real people instead of merely props. And the ensemble cast is first-rate.

Max and Annie’s game night regulars include Kevin (Lamorne Morris, from TV’s New Girl) and Michelle (Kylie Bunbury, who starred on the TV series Pitch), a fellow married couple with an escalating mini-tiff about what celebrity she might have slept with when their relationship was in its formative stages. (Could it have been Denzel Washington?) Billy Magnussen (from TV’s Get Shorty) is a dim-bulb charmer as the gleefully imbecilic Ryan, who always brings a different bimbo to game night—only this time, he’s met his match with his brainy British coworker, Sarah (Sharon Horgan, from TV’s Catastrophe).

And Jesse Plemons (who appeared in a Black Mirror episode alongside Magnussen in December, and costarred with Chandler in TV’s Friday Night Lights) is a show-stealer as Max and Annie’s next-door-neighbor, Gary, a super-uptight state trooper who would do anything to be a part of their game nights.

Bateman is as dependable as always, an even-keeled Everyman plunged into wildly unreasonable circumstances. McAdams shows formidable gung-ho comedic chops. They’re a terrific team, and the movie interweaves a subplot about their uphill struggle to get pregnant and have kids, and how Max’s stress (very likely brought on by his constant inferiority complex around his brother, Brooks) could be a factor.

Game Night manages the tricky mix of broad comedy with shoot-outs and rollicking action sequences that—as even the characters admit—would fit easily into a Liam Neeson flick. There are many hilarious bits throughout, including a high-stakes “keep-away” toss match with a highly prized Febergé egg that spans several rooms and levels of a mansion; a little, fluffy white dog making a big, bloody mess; and Annie improvising as a back-alley medic for Max with a bottle of cheap wine, a squeak toy, her iPhone and a sewing kit.

The characters start out as competitors, but as the game becomes something more than a game, their competition turns to cooperation. That’s the message of Game Night when it’s all over and everyone comes out a winner—despite the bullet holes, knife wounds and slightly higher body count than you’d find in a typical round of Never Have I Ever.