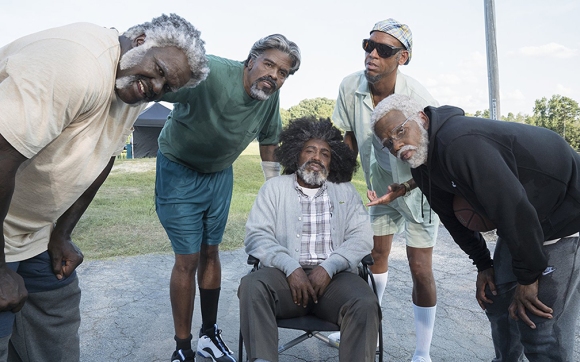 Uncle Drew is a basketball comedy with its roots in television spots for Pepsi Max featuring the NBA’s Kyrie Irving of the Boston Celtics, disguised as an elderly man who schools younger players—or “youngbloods”—in pickup games.

The film takes that concept and runs with it, expanding the plot, adding a half-court of NBA all-stars and some Hollywood live wires.

After a faux ESPN 30 For 30 documentary intro—in which we learn that Uncle Drew was an NBA legend who mysteriously disappeared from the scene three decades ago, at the height of his fame and glory—we begin to meet the players. 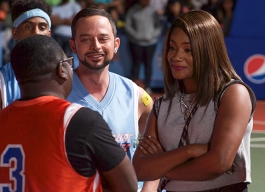 Dax (Lil Rel Howery, from Tag and Get Out) is a hapless Foot Locker employer who loves basketball. But traumatized by a childhood buzzer-beater block on the court, he hasn’t been able to play the game since. So now he manages a team from the sidelines and dreams of winning a big annual streetball tournament—and $100,000—at Rucker Park in Harlem.

His gum-smacking, wisecracking nemesis, Mookie (Nick Kroll), thwarts him at every move, however. At the last minute, Mookie steals Dax’s star player, Casper (Aaron Gordon of the Orlando Magic), the rest of his team and his gold-digging girlfriend, Jess (Tiffany Haddish).

Dax is understandably crushed, but things begin to start looking up when he finds the fabled Uncle Drew, mopping up with a cocky youngblood on a playground court. Drew (again played by Irving) agrees to play for Dax’s team, under one condition—if he can bring along his old teammates.

Of course, rounding everyone up is not so easy—and the team certainly doesn’t appear as sharp and game-ready as they were 30 years ago. Preacher, now a bona fide man of the cloth, has to sneak away from his church, and his wife, to play ball. Lights is legally blind. Boots is in a wheelchair—and a psychiatric ward. 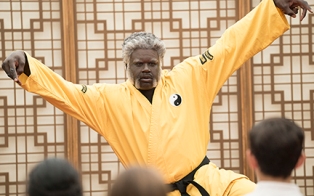 Big Fella (O’Neal) is a martial arts instructor in the Zen zone.

And Big Fella is in the Zen zone as a children’s martial arts instructor—with a mountain-sized grudge on his gigantic shoulders. “Without a good defense,” he tells his class of young students, “your offense means nothing.”

Can Dax and Drew get them all back in shape, and on board?

The big appeal is seeing all these big basketball stars in decades-deep disguise as geezers, then finally breaking out their hidden mojo on the court to show younger hotshot players how it’s done, old-school style—like an NBA edition of Undercover Boss. There’s plenty of humor as Dax and the players jib and jab each other, and basketball fans in particular will appreciate the inside jokes and zingers—Shaq and free throws, Webber’s character inquiring about time-outs.

Howery, Kroll and Haddish are all comedy pros, and the needle on the laugh-o-meter jumps whenever they’re on screen. Director Charles Stone III, whose other films include Drumline and the Bernie Mac baseball comedy Mr. 3000, keeps things light, lively and generally predictable while weaving in some sentimental messages about family, forgiveness and what it means to play a “good game.” 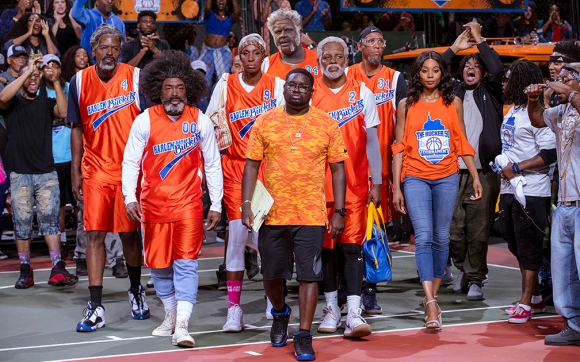 Watch for J.B. Smoove and Mike Epps in small roles, and Erica Ash (who stars as Gwen Sullivan on the BET series In Contempt) as Boots’ granddaughter, Maya, who takes a romantic shine to Dax.

As “non-actors,” the b-ball players roll loose and easy with their parts, especially since they are performing underneath layers of makeup and latex prosthetics, wigs and gobs of glued-on grey facial hair. If there’s ever an award for Best Buns in a Hospital Gown by a Former NBA All Star, well, Shaq’s a shoo-in for a nomination.

Uncle Drkew isn’t a cinematic slam dunk, but it’s a surprisingly solid basketball buddy flick that plays by the rules, shoots for laughs, and scores—especially for sports fans.