British actress Gemma Arterton got her big break in the movies as ill-fated “Bond girl” Strawberry Fields, an intelligence operative in Quantum of Solace (2008) opposite Daniel Craig.

Compared to that Bond blockbuster, Summerland is a much smaller, much more genteel film, but it certainly provides Arterton a far bigger role—and it’s a project that obviously means more to her personally, as she’s one of its executive producers.

She stars as Alice Lamb, a reclusive writer holed up in her seaside cottage in Sussex, England, comfortably distanced from the ravages of World War II across the Channel. Alice is content—even though the locals think she’s a bit of a reclusive, prickly oddball, and prankish children whisper that she might be a Nazi spy, or even a witch—as she tends her garden and pours herself into her latest literary project, researching the connections between folklore, mythology and science.

And she certainly isn’t all-aboard when a young moppet boy, Frank (Lucas Bond), shows up one day, literally at her doorstep—he’s a refugee from London, about an hour away, which is being bombed in nightly air raids by the Germans. As part of the English war effort, as many children as possible are being evacuated and temporarily resettled with host families in safer havens, like Alice’s coastal hamlet.

Alice protests that Frank will interrupt her routine and her work. “We’ve all got to do our bit,” the local schoolmaster (veteran British actor Tom Courtenay) tells her. 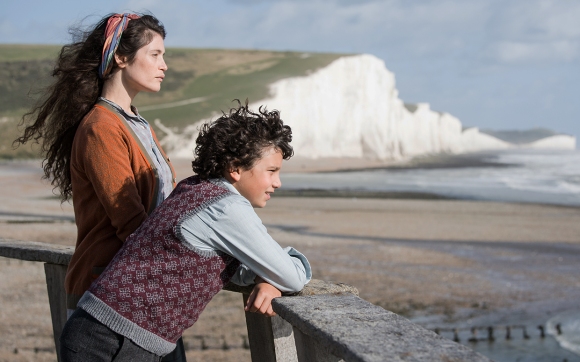 As Alice and Frank gradually warm to each other, Summerland gradually widens and deepens. Conversations about Alice’s writing and research lead to discussions with Frank about afterlife, and how Alice doesn’t believe in heaven. “It was just made up by the Christians,” she says. “People want to have something to believe in—like magic, or God. Hokum, all of it.” Pre-Christian pagans, she says, had a concept of Summerland, a layer of “restless souls” that ancient mariners had stories of seeing as an island floating above the water.

Alice is convinced there’s a basis in science, or fact, or some real-life experience, for the legends of Summerland—or just about anything. “Stories have to come from somewhere,” she says.

And Alice has her own story, one she’s kept hidden from almost everyone—a love story that’s at the very heart of Summerland. We see it in unfolding in flashbacks, and when she finally reveals it to Frank, it’s both glowingly beautiful and wrenchingly sad.

“Would you think it was strange,” she asks him, tentatively, “if a woman loved another woman?”

The other woman is Vera (Gugu Mbatha-Raw, from Apple TV+’s The Morning Show), and the “forbidden” same-sex relationship between her and Alice, back in the 1920s, was made even more forbidden because of the brown color of Vera’s skin. Their breakup—and the reason why—devastated Alice.

Frank tells Alice he doesn’t understand why anyone would think it’s strange for two women to fall in love, and Alice sheds a tear for his innocence—and for the harshness of the world he has yet to encounter.

The movie doesn’t dwell on the era’s resistance to the sapphic relationship between Alice and Vera. But the message is clear—especially to women who know what it feels like to live in a world—in any era, under any circumstances—that wants to box them in, box them up, box them out or simply classify them as “a temptress or a virgin,” as Alice says, “bound to get blamed for something.”

In one flashback scene, when Alice gets a door slammed in her face, cutting her off from Vera and her family, the sound will ring like a painful slap to women, anywhere, everywhere, who’ve ever felt the sting of rejection and dismissal, of being made to feel invisible, unwanted or unnecessary.

Summerland is the feature debut for writer-director Jessica Swale, an award-winning playwright now making the transition to film; both Arterton and Mbatha-Raw have starred in her stage productions. Proudly fem-centric—with women as the surging creative force of its substance and the focus of its story—this “little” independent film has a lot of big things on its mind: female independence, imagination and intellect; life, death and the power of love; and the beauty of all loving relationships.

Stories have to come from somewhere, but they have to go somewhere, too—and where Summerville goes will likely surprise you, wrapping up World War II, model airplanes, Viking funerals, floating islands, the clackety-clack of a typewriter and a span of many decades into the warm hug of a cozy conclusion.

It’s certainly not James Bond, but it is a great piece of romantic escapism for anyone who wants a well-mannered British drama with a huge heart, good humor, lovely ocean-side chalk hills scenery and a feel-good message that reverberates across time, as powerful and as potent as ever.