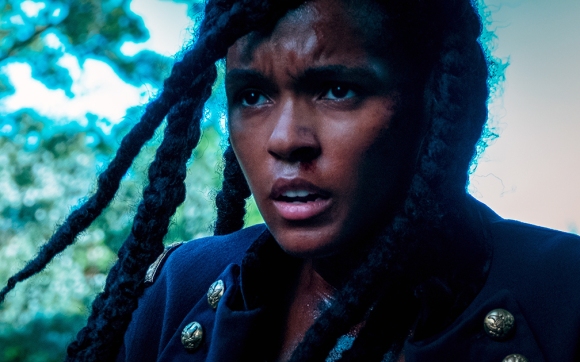 On the poster, the title treatment for Antebellum has the second “e” turned around, facing backward.

That’s because the movie has a twist, a major turn, that makes it something more than just another “slave drama.”

The film opens with a quote from Mississippi’s late, great, Nobel Prize-winning author William Faulkner: “The past is not dead. It’s not even past.” That concept is not only central to the story, it rings with timely relevance in this summer’s highly charged climate of racial reckoning and reawakening.

Janelle Monáe, when we first meet her, is Eden, a slave on a Louisiana plantation overseen by the vile Capt. Jasper (Jack Huston) and the sadistic Confederate general (Eric Lange) who literally brands Eden as his private property.

Things are brutally bad, as you can imagine, on the plantation. The young Rebel troops stationed there are like drunken frat boys, there’s a strict no-talking rule for the slaves, and you don’t even want to know about the horrors of “the shed.” Eden and Eli (Tongayi Chirisa), a male slave, whisper desperate plans of a breakout and a getaway…

But about midway through the movie, we meet another character, and she’s also played by Monáe—waking up with her husband, greeting a bright, sunny day in their modern suburban Virginia townhouse. She’s Veronica Henley, a best-selling author and sociologist and somewhat of a media celebrity for speaking about the disenfranchisement of Blacks in America and the inequities of “historically marginalized people.”

Monáe as Victoria Henley, with her daughter (London Boyce).

When her daughter asks her about all those big words, Veronica uses an anecdote about playmates, anger and fear, and tells her little one that “things are not always what they appear to be.”

And neither is Antebellum what it appears to be, certainly at first. How does it put together Monáe’s two characters, and these two jarringly different situations? Is it a terrible dream, a living nightmare, a rip in the fabric of space and time? I won’t tell. But I will tell you that you’re in for a wild, galloping ride, kind of like The Twilight Zone crossed with D’jango Unchained, with some bona fide surprises and a few painfully difficult moments to watch.

Directors Gerard Bush and Christopher Renz, who also wrote the original screenplay, have made a “message” movie that means to remind viewers of the cruelty of slavery, America’s “original sin,” while driving home the point that the wretched system of warped beliefs and twisted ideology in which slavery was rooted, like Faulkner’s “past,” isn’t really dead—or even really past, after all.

Monáe, who came to most moviegoers’ attention in Hidden Figures and Moonlight (both 2016), creates a character for whom we can cheer. Huston, the grandson of iconic Hollywood filmmaker/actor John Huston, has a somewhat trickier task, as a strutting, sneering villain with no redeemable qualities. But he plunges into it with gusto. Jenna Malone (Johanna Mason in The Hunger Games franchise) slathers on the Southern-drawl sauce just a little thick, however, chewing her scenes—as the detestable plantation madam—into pulpy B-movie puree.

But first-time feature-filmmakers Bush and Renz, unfortunately, don’t quite seem to yet have the finesse to pull things off without a few hitches. Characters are mostly one-dimensional, the moon is always full (and totally fake-looking), and a glimpse of a reveal during the end credits makes you question the very premise of, well, the whole movie.

Antebellum was originally slated to be released in theaters, in April, but the COVID-19 crisis pushed off its date and its circumstances until now. The timing may make it even more meaningful. Since April, of course, the nation has reeled and roiled from protests sparked by police killings of Black people, a powerful renewal of the Black Lives Matter movement, calls to end systemic racism and intensified scrutiny on the symbols of the Confederacy—particularly its flag and its monuments—as emblems of hate. The U.S. Department of Homeland Security recently predicted that the greatest terrorism threat to America in 2021 will come from white supremacy.

Even the word antebellum, which literally means “before a war,” became so culturally toxic—because of its particular connection to the South, slavery and the Civil War—that the hitmaking country group Lady Antebellum dropped it from their name, becoming simply Lady A. You may recall that the Dixie Chicks, with similar sentiments, are now just the Chicks.

So, slavery, racism and America’s deep-rooted heritage of hate are hot topics all over again, particularly right now, and this movie turns up the heat even hotter.

A Confederate flag and a big ol’ statue of Gen. Robert E. Lee become significant, supremely ironic props. A cell phone rings at a most bewildering moment. And a little girl in a hotel elevator will creep you out, almost like one of the twins from The Shining.

You’ll get the double meaning when Eden tells a dying Confederate officer to “Open your eyes!” She’s not just talking to him in his final gasping moments, but to anyone who might need a jolting reminder, about a society erected on white supremacy and the evil of outright ownership of another group of humans.

Antebellum is about a horrific world “before the war” that never quite ended when the smoke of the battlefield cleared, and about how the past has a way of marching right into the present. This double-edge slave story  will twist you around, turn you backward and open your eyes to the scars of racism that are still painfully, awfully real, wrenchingly raw—and very much with us still, today.