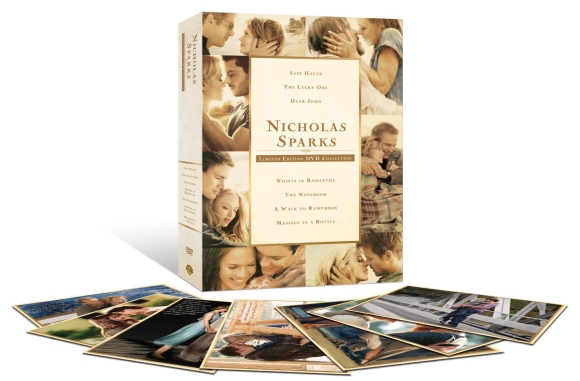 Hey, lovebirds, here’s something to coo about: Seven star-studded movies based on the romance novels of Nicholas Sparks are now for the first time available together in this super-snuggly gift set. Sparks, if you don’t know, is the maestro of mushiness whose 17 books have been published in 50 languages and sold some 90 million copies worldwide—and turned into these flicks: Safe Haven (2013) with Julianne Hough; The Lucky One (2012) with Zac Efron; Dear John (2010) with Channing Tatum and Amanda Seyfried; Nights in Rodanthe (2008) with Richard Gere and Diane Lane; Message in a Bottle (1999) with Kevin Costner; A Walk to Remember (2002) with Mandy Moore; and The Notebook (2004) with Ryan Gosling and Rachel McAdams. Extras include a postcard set with images from each flick.