What do superheroes do when they’re not saving the planet? A lot of the same things everyone else does—they prattle around the house, do their best to get along and sometimes get on each other’s nerves.

Crammed into a back of a tiny VW Beetle, the hulking Winter Soldier (Sebastian Stan) has a request of Falcon (Anthony Mackie). “Could you move your seat up?” Like a grumpy sibling on a family road trip that’s already over-stretched his patience, Falcon isn’t exactly in an agreeable mood. “No!” he snaps. 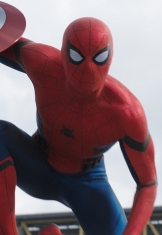 Spider-Man (Tom Holland) gets in on the action.

Captain America: Civil War is a big, sprawling superhero mega-movie, with more spandex to the gallon than any flick that’s come down the pike in a long time. The latest in the multi-billion-dollar Marvel cinematic canon, it’s officially the third of the Captain America franchise, but it’s also a continuation of the Avengers movie arc, and it ropes in characters from other Marvel movie properties as well, including Iron Man, Ant-Man (Paul Rudd) and even the new Spider-Man (Tom Holland), whose movie won’t be in theaters until next summer.

The “Civil War” in the title refers to the major rift that occurs within the Avengers when a United Nations panel wants to rein them in. The global community is concerned about the civilian deaths and wakes of destruction that accompany the superheroes’ bad-guy smackdowns—a theme that also cropped up a few weeks ago in another comics-character slugfest, Batman v Superman.

The Avengers divide into two camps about the issue—those who feel that some international oversight and cooperation is the way to go (led by Iron Man), and the rebels who refuse to sign the accord (team Captain America). That sets the stage for several spats, a couple of subplots, more than two hours of squabbles and one stupendous battle royale in an abandoned airport. 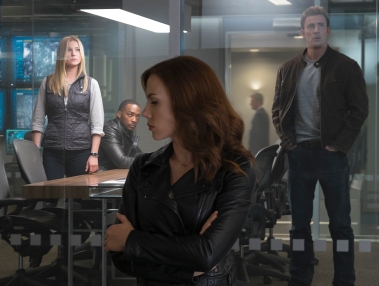 Directors Anthony and Joe Russo keep things moving along with style, substance and significant flair, and they give all their characters time to shine—no easy task when they are so many, including newcomers Chadwick Boseman as an African prince who becomes the Black Panther; Marissa Tomei as Peter Parker’s Aunt May; and Daniel Brühl as the Eastern European über-villain Zemo. There’s also Jeremy Renner as Hawkeye, Martin Freeman as a CIA official, Emily Van Camp (from TV’s Revenge) as Sharon Carter, and William Hurt as the U.S. Secretary of State. Oscar-nominated Alfre Woodard pops in as an aggrieved mom.

But through it all are the Avengers, the world’s coolest, most powerful cadre of superfriends—family, actually—being ripped apart, fractured from within, pulverizing each other as the divide between them, widened by treachery, becomes filled with distrust, dark secrets and deep wounds from the past.

There’s a whole army of frozen Winter Soldiers, a funeral and a sweet kiss between two characters that may point to future romance.

How does this wham-bam, jam-packed road trip on the superhero highway end? I won’t spoil it. But you shouldn’t be surprised to know that even when it does, it doesn’t, and that the Marvel movie map is still being drawn for Captain America, Iron Man, Spider-Man and other characters for years to come!

Well, at least Johnny Depp’s latest movie has something in common with The Wizard of Oz, Citizen Kane and It’s a Wonderful Life: All three of those films, like his new flop, were initially box-office bombs.

Those flicks much later found respect and beloved places in cinematic history. Perhaps some new appreciation may also be heaped, decades down the road, on Mortdecai. But so far Depp’s dud has been savaged by most critics and has only attracted a trickle of audience turnout. Not many people have wanted to see him, apparently, in yet another nutty role, with a fake accent and goofball mannerisms—and particularly not in this movie, which is a bit of an oddity itself. 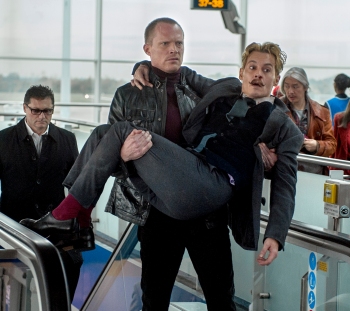 Based on a series of musty 1970s British comedic cloak-and-dagger novels, Mortdecai stars Depp as the eccentric art wheeler-dealer of the title, Gwyneth Paltrow as his wife, and Ewan McGregor as a MI5 agent on the trail of a missing art masterpiece that may contain a long-hidden code leading to squirreled-away Nazi gold. Eventually everybody gets in on the action, including Mortdecai’s loyal manservant (Paul Bettany), a competing American art collector (Jeff Goldblum), his nymphomaniac daughter (Olivia Munn), and some nasty Russian thugs.

The whole story seems kookily out of time, a far-out, swingin’-’70s romp plunked down clumsily in the present. Or is it a mod, mapcap comedy run backward through the gears of a time-machine blender? Or a weird parcel from a distant era yet to come, when Depp’s off-kilter-characters are worshipped as idols by a future civilization?

The humor, the jokes, the mannerisms, everything about it is so pseudo-sophisticated British, so Pink Panther-meets-Austin Powers-meets-Mr. Bean, so camp-ily, willfully, woozily derivative of practically every English sleuth saga and spoofy bungle caper that’s ever been done, it begs the question: Why did anyone bother to make this curious, out-of-time artifact of a movie at all, and why now?

Depp, who has fashioned quite a career out of quirk, adds yet another peculiar personality to his collection. Charlie Mortdecai, a wacky conglomeration of grunts, bleats, facial tics and a moustache that becomes one of the movie’s subplots by itself, is a hoot, but dimensionally hollow, and highly unlikely to join Capt. Jack Sparrow, Edward Scissorhands, Ed Wood or Willy Wonka in his hall of fame.

It’s all a tad randy, but only a tad, just barely enough for its R rating. That means anyone expecting a “raunchy” grown-up comedy, like a lot of R-rated comedies these days, will likely be disappointed at its relative tameness—and that any of Depp’s younger fans, from his Pirates of the Caribbean Disney movies, won’t be able to see it at all.

There are some funny bits, like a rather novel car chase, some clever dialogue and banter, and what seems like a total commitment from the cast, who appear to be having a cheerio, cheeky old time. But the plot is a bit of a runaround slog, and some of the gags require a good deal of stick-with-it—one involves whether a character will take a bite from a slab of stinky old cheese, or not.

Mortdecai may not be Johnny Depp’s finest moment, or even one of them. It’s not looking like it right now, anyway. But hey, let’s give this slab of stinky cheese another 30 or 40 years and see what happens, shall we? 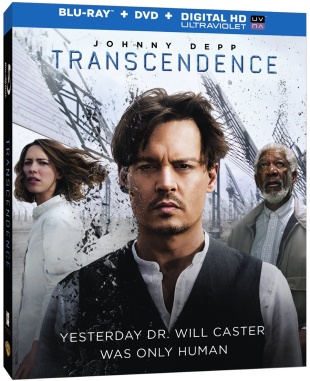 What are the limits of artificial intelligence? In this sci-fi, not-too-futuristic thriller, Johnny Depp plays a researcher working on a machine that combines the knowledge with human emotion—a computer with consciousness, or “transcendence.” But forces are afoot to stop him, even as the secrets of the universe await—and the fate of the world hangs in the balance. Co-stars include Rebecca Hall, Cillian Murphy and Paul Bettany, and the Blu-ray comes with several making-of featurettes.