“Love and work, work and love, that’s all there is,” says Ben (Robert De Niro), paraphrasing Sigmund Freud in the opening moments of The Intern.

Ben’s a 70-year-old retiree, adrift in Brooklyn after the death of his wife of 40-some years. He longs for purpose and connection that Mandarin Chinese lessons, tai chi in the park and morning treks to Starbucks can’t provide. When he sees an ad for a “Senior Intern Program” at a hip new e-commerce clothing company, he thinks it could be just the thing to bring his decades of experience, loyalty and passion for productivity back into play.

After a humorous round of interviews with the start-up company’s young “talent acquisition” team, Ben gets the job, assigned directly to the busy-bee founder and president, Jules (Anne Hathaway), a mile-a-minute micromanager who barely has time to even notice him.

How long will it take for the geriatric guru to go from invisible to indispensible?

Writer-director Nancy Meyers is best known for the frisky romantic comedies Something’s Gotta Give, It’s Complicated and The Parent Trap. There’s both romance and comedy in The Intern—there’s no mistaking the soft, rounded edges of Meyers’ humor and the sunny storybook optimism of her feel-good style. But still, it’s not what you might think.

Ben doesn’t fall—at least romantically—for Jules. They both grow ever closer in their relationship, and even end up literally “in bed” together, but it’s all business, building a genuine friendship.

De Niro, a double Oscar winner, is well known for playing tough, so it’s always great fun to see him working whimsical. But shades of some of his former, heavier performances are always around, lurking—Ben has a “mirror” moment that might be seen a silent spoof of “You talkin’ to me?!” from Taxi Driver, and a comedic house break-in feels like it might morph into Goodfellas parody, if only there were a body in the trunk and a walk-on by Joe Pesci.

Hathaway, 32, another Oscar winner, plays Jules with sensitivity for her character’s strengths as well as her struggles—which include a frazzled home life with her husband (Anders Holm, from TV’s Workaholics) and their precocious young daughter (JoJo Kushner), and conflict about how her company has grown so much it may need to bring in a CEO, someone above her, to run things.

The Intern won’t win any awards. But for some hearty laughs and touching cross-generational life lessons from a couple of “old pros,” it’ll make for a decent date night, especially with audiences who often search in vain for movies of any kind—particularly comedies—seasoned for more “mature” tastes.

The King of Comedy

Don’t be mislead by the title: There’s not a lot of ha-ha in this quirky tale of a would-be stand-up comedian (Robert De Niro) who kidnaps a successful New York City talk-show host (Jerry Lewis) to get a long shot a stardom. Directed by the great Martin Scorsese, it’s long been regarded as a prickly modern parable about the high price of fame and the extremes to which some people are willing to go for even a fleeting taste of it. This neat-o 30th anniversary Blu-ray package features interviews with the director and stars, a making-of documentary and deleted scenes.

Robert De Niro, Morgan Freeman and Kevin Kline play grown-up childhood chums who reunite for a Vegas bachelor party weekend in honor of their last single pal (Michael Douglas). Will the wild, wanton ways of Sin City do these 60-somethings in, or can a wise, lovely lounge singer (Mary Steenburgen) keep them on the straight and narrow? Friendships are tested, Viagra jokes fly, smart-aleck young pups get their comedic comeuppance from old dogs, and Morgan Freeman pops some serious moves on the dance floor. Extras include several behind-the-scenes features.

De Niro, Stallone slug it out in clichéd boxing comedy

What if the two boxers from two of Hollywood’s most iconic boxing movies of all time came together in one contemporary clash of the titans?

Well, Rocky and Raging Bull don’t show up, exactly, but you’ll have no trouble remembering the roles Sylvester Stallone and Robert De Niro played some 30 to 35 years ago watching them spar in Grudge Match, in which they both portray long-retired palookas lured back to the ring by the promise of a big payday—and the opportunity to settle a decades-old dispute about who’s king of the knock-outs.

Back in the day, “Razor” Sharp (Stallone) and Billy “Kid” Donnen (De Niro) were Philadelphia scrappers who battled their way to the top of the light-heavyweight heap, culminating in an epic slugfest that ended with a split decision. Razor called it quits, however, and announced his retirement before a tie-breaking rematch could be arranged, and Kid’s been obsessed with “what might have been” ever since. 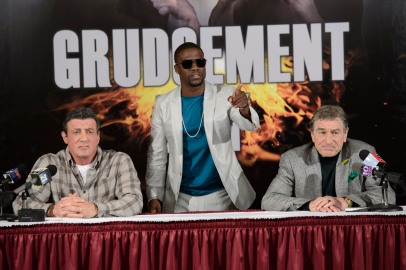 Now a motor-mouthed young promoter (Kevin Hart) sees an opportunity to make his name (and a lot of moolah) by setting up a long-overdue bout between the two rusty old steel-town foes and turning it into a major media event.

Will Razor agree to put on the gloves one more time? Will the Kid swap pancakes and scotch for salads and sit-ups? Will the press stop making cracks about Geritol and Life Alert necklaces? And who will the woman (Kim Basinger) who had to choose between Kid and Razor three decades choose this time around?

Stallone mumbles, De Niro mugs. There are some funny bits, but director Peter Segal (50 First Dates, Anger Management, Get Smart) somehow manages to miss with most of his punches, comedic and otherwise. The jokes are lame and low; this is the kind of movie that thinks anything from the waist down is hilarious. The story trots out nearly every contrivance and cliché imaginable, and the performances are about as lazy as you can get in a movie that still requires people to get up and walk around.

And walking around isn’t even required, at least not all the time, for Alan Arkin’s character, Razor’s “elderly” trainer, whose ability to self-ambulate comes and goes.

Ironically, one of the best moments of the whole movie happens after it’s finished. Stay for the credits and catch the snippet in which Hart’s promoter tries to tempt another couple of former boxing champs back inside the ring for his next Big Event.

By the time things get around to the “Grudgement Day” match you know is coming, you just want the scene—like the movie—to be over before either Stallone, 67, or De Niro, 70, gets hurt. If I had a towel, I’d have thrown it in long before the legacies of two great movies were slammed to the mat and ground into a crappy comedy like this one.

With five Oscar winners on screen, ‘Last Vegas’ should be more of a winner, too

Advanced-age audiences have become a sizable movie demographic in recent years, one to which Hollywood has (wisely) been paying more and more attention.

Somebody wasn’t paying quite enough attention, however, to Last Vegas, which seems like a lazy exercise to cash in on the growing base of “maturing” ticket buyers using a cast of venerable, award-winning actors plugged into a story template clearly lifted from another successful franchise.

A buddy comedy about four 70-ish friends who convene for a bachelor-party weekend as the last single member of their group is (finally) about to tie the knot, it’s an over-the-hill Hangover with most of the ribald raunch of that 2009 blockbuster replaced with creaky jokes about achy joints, hemorrhoids and rapper 50 Cent sheepishly complaining to hotel management that the four horsemen of the AARP apocalypse are slammin’ and jammin’ so loudly he can’t sleep.

The movie counts on its all-star pedigree to carry its slender storyline a long way—and that’ll probably be enough for some folks, who’ll simply enjoy the precedent-setting spectacle of seeing Robert De Niro, Michael Douglas, Morgan Freeman and Kevin Kline sharing the screen as the childhood buddies now grown up and reunited for a geezer-fied fling.

The quip-filled script by Dan Fogleman (whose resume includes Cars, Bolt, Tangled, Crazy, Stupid Love and The Guilt Trip) sets up the characters quickly: Sam (Kline), who’s had so many joints replaced that his friends jokingly call him “the Bionic Man”; Archie (Freeman), recovering from a stroke but dying a slow death under the suffocating care of his overly attentive son; and grumpy Paddy (De Niro), living under a cloud of gloom after the death of his wife.

All three come to Vegas from their far-flung corners of the country when Billy (Douglas), their slick, high-living, lifelong bachelor bud with a sexy 32-year-old girlfriend, decides to get married and throw himself a Sin City send-off.

As the guys acclimate to the glitz of their new surroundings, director John Turteltaub, who previously steered three National Treasure kid-centric adventures, has them run a gauntlet of geriatric jokes. Most of chuckles, alas, feel churned from cheap sitcom stock. Sam, who’s been given a weekend “free pass” (as unlikely as that sounds) from his wife, can’t wait to pop the single Viagra pill in his pocket. Archie tries to maintain his ruse from his son that he’s really on a church retreat. The doorkeeper at the hotel’s after-hours nightclub thinks the group’s paltry $5 tip to skip his long line must be a joke. A young inebriated woman asks them if they have any drugs. “Does Lipitor count?” they want to know.

“This may be the first bachelor party I’ve attended that could be covered by Medicare,” says Diana (Mary

Steenbergen, Oscar winner No. 5), a lovely lounge singer who’ll become a major player in the way the weekend unfolds.

Other movies have plumbed the issues of growing older with grace, dignity and a real sense of the humor and humanity that can be found in the walk into the long shadows of the twilight years. The four old lions in Last Vegas don’t aspire to anything so profound as they rip, roar, rib each other and “party like it’s 1959.”

You might expect more from an assemblage of actors with a spread of six golden Oscar statues among them. Those seem like pretty good odds for a successful, can’t-lose movie, right? Sorry to report that payoff is such a long shot.