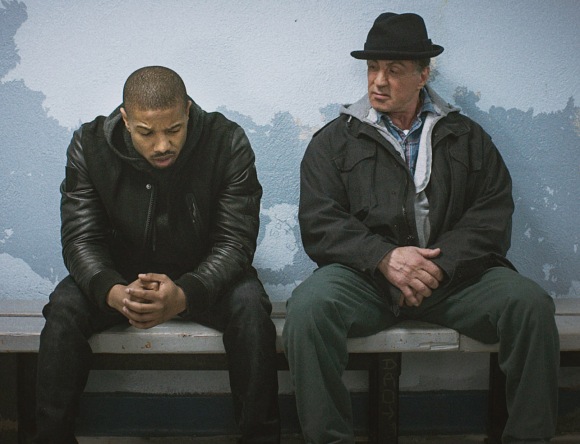 “No one cares about Balboa anymore,” sneers “Pretty” Ricky Conlon (Tony Bellew), the young British boxer itching for a fight in Creed.

It’s been nearly 40 years since the first Rocky movie introduced the plucky palooka, which Sylvester Stallone continued to play in five sequels. Rocky Balboa became a boxing icon, a rock-’em, sock-’em legend and a rags-to-riches tale for the ages.

But, does anyone care anymore?

In Creed, the first Rocky movie in which Stallone doesn’t put on the gloves, Rocky is coaxed out of retirement to train the son of his late friend and former rival Apollo Creed. 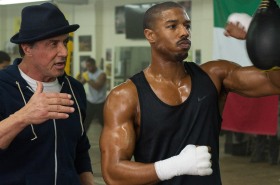 The son, Adonis “Donny” Johnson (Michael B. Jordan), comes from L.A. to seek Rocky out at Adrian’s, the Italian restaurant named after his late wife that he now runs in his Philadelphia hometown. A born scrapper who grew up in a juvenile facility before finally being adopted by Apollo’s former wife (Phylicia Rashad), Donny appeals to Rocky’s own hardscrabble instincts—and their shared legacy, which Donny says makes them “like family.”

Can the grizzled former superstar help the feisty greenhorn learn the ropes, come to grips with his own legacy and face the cockney challenger from across the ocean, who’d love nothing more than to draw blood from a Creed—and the protégé of a Balboa?

Writer-director Ryan Coogler, who worked previously with Jordan as the star of the powerful true-story drama Fruitvale Station (2013), draws deep on Rocky legacy while masterfully building a compelling, contemporary story that stands strong on its own, focusing on just a few central characters. Tessa Thompson brings sweetness and spunk as Bianca, an aspiring singer who lives in the apartment beneath Donny, whose music at first keeps him from sleeping—then later soothes his fighter’s soul.

Tony Bellew has a real swagger as the undefeated British heavyweight champ—because he really is one. As Apollo Creed’s widow, Phylicia Rashad (who played Bill Cosby’s TV wife, Clair) frets that boxing will wreck Donny the way it did her husband. “Your daddy died in the ring,” she tells him. “You’re better than that.”

Coogler’s technique is almost a character in itself, placing the camera inside the ring, between, behind and in front of the fighters, darting, shifting, bobbing and weaving along with them. One entire match is filmed as one breathlessly long, unbroken take, from the dressing room into the ring, through the final bell.

The blows land hard, and so does the sentiment—especially when the story shifts in the second act to another kind of “fight” that turns the tables on Rocky and Donny’s relationship. Creed packs a punch, in more ways than one.

There’s a lot to like and more to love about this movie, but most of it comes down to Jordan, whose performance as Adonis is raw, rousing and moving, and to Stallone, who at 69 does some of his best acting in years.

In one impactful scene, Adonis and Rocky ascend the steps of the Philadelphia Museum of Art, immortalized in the original movie. “When you get to the top, you think you can fly,” says Rocky, this time a bit out of breath.

In making us care about Rocky Balboa again, in a big, big way, Creed indeed soars.

You can’t keep Hollywood’s most iconic palooka down, and he certainly goes the distance in this roundup of all six Rocky movies, from Sylvester Stallone’s original underdog saga that got it all started (1976) to his out-of-retirement comeback in Rocky Balboa (2006). A generous array of extras makes this a true knockout for fans of the franchise: commentary from Stallone; the actor’s appearance on a 1976 episode of Dinah!; a three-part making-of documentary; multiple behind-the-scenes features; a tribute to actor Burgess Meredith; and an interview with cigar-chomping boxing writer and sports historian Bert Sugar.