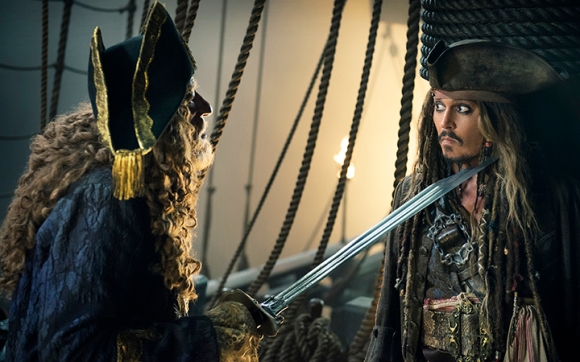 “A pirate’s life,” muses captain Jack Sparrow (Johnny Depp), covered in mud, soaked in rum and being led away by British soldiers in the fifth movie sprung from Walt Disney’s theme park ride of the same name.

In Pirates 5, let’s just call it, Sparrow is searching for the Trident of Poseidon, a legendary staff said to hold “all the power of the sea.” Of course, it don’t come easy. A nasty new villain, Salazar (Javier Bardem), has risen from his watery tomb in the Devil’s Triangle, with a crew of murderous zombie not-so-jolly rogers, looking for the same mythical doodad—and he has a serious bone of revenge to pick with Jack Sparrow.

And Jack’s old nemesis, Barbossa (Geoffrey Rush), also gets drawn into the fray. 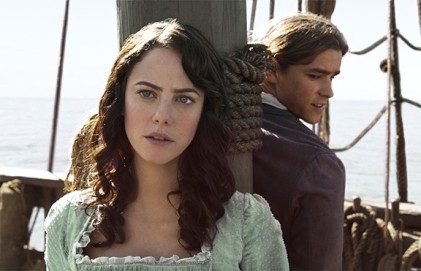 Two other new characters provide the movie’s fresh faces—and its spark of romance. Spunky, handsome Henry Turner (Brenton Thwaites, who played Prince Phillip in the movie Maleficent) is on a lifelong quest to find Sparrow, the renowned captain who alone holds the key to breaking a curse that binds his father, William (Orlando Bloom), to Davy Jones’ sunken Flying Dutchman. And Carina (Kaya Scodelario from the Maze Runner franchise) is a fetching young astronomer whose love of the stars causes her to constantly be mistaken for a sorceress.

There are a lot of moving parts in Pirates 5: a lot of characters, a lot of elaborate effects, a lot of things meant to razzle and dazzle. The movie is part of a huge franchise, one that’s made nearly $1.3 billion since 2003.

Now, after sailing around for nearly 15 years, it feels like something that’s taken on too much water, too many passengers, too many back stories and too many barnacles. A new pair of directors, Joachim Rønning and Espen Sandberg, bring a few new ideas to some of the swashbuckling spectacle and the slapstick—like Jack and Carina’s escape from their botched execution, a bank robbery that involves stealing an entire building, and a getaway from the ocean floor up a massive chain of a ship’s anchor.

But the whole enterprise feels overstuffed and waterlogged, all a-swirl with bustle, swill and bilge, despite its attempts at “deeper” messages about treasures of the non-material kind and navigating by maps don’t exist on paper. It probably reaches its lowest, most ludicrous point when Sparrow, Henry and Carina escape a group of ghost sharks. The phantom fish crunch their row boat, nip at them and leap (in slow motion) overhead before Capt. Jack hooks one to speed-tow his little vessel ashore.

I kept imagining how much better the scene would have been with music from Gilligan’s Island. 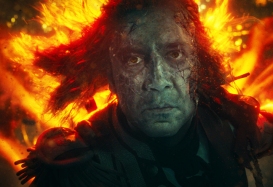 As the maniacal undead Salazar, Bardem channels the bad-guy charisma that made his character of the psychopathic killer Anton Chagurh in No Country For Old Men so bone-chillingly memorable. He’s a wheezing, ghostly white wraith, dripping blood and literally falling apart in flecks of deep-sea, computer-generated ghoul dreck. And he’s the best-looking pirate in his motley, monstrous crew.

You’ll find out in Pirates 5 how and why a young Jack (a very strange looking, slenderized, un-accessorized, computer-enhanced Johnny Depp) and Salazar got off to such a bad start, how the lives of other central characters overlap and intersect, which British rock legend makes a cameo (hint: It’s not one of the Rolling Stones), and which of the franchise’s original stars pop back in for the finale.

“What be our headin’, cap’n?” crewman Gibbs (Kevin McNally, from TV’s Designated Survivor) asks Sparrow as they set sail in the movie’s final scene. “We shall follow the stars!” replies Jack.

Methinks it’s finally time the stars led Jack and his “pirate’s life” into port for good.