The slow-moving, meditative, existential charms of ‘A Ghost Story’ 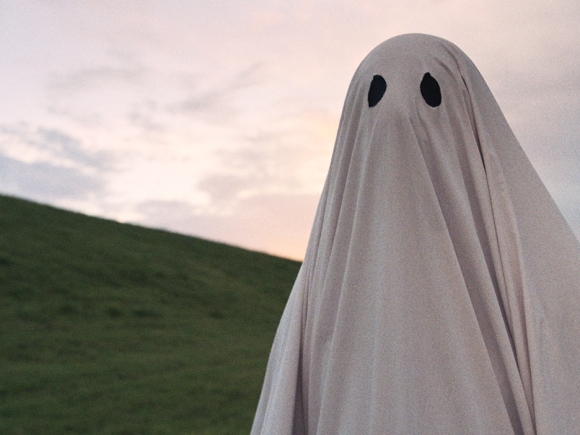 Despite the spooky title, there’s nothing to be frightened of in A Ghost Story. It’s not that kind of movie. But there is a ghost, and this is his story.

As the movie opens, we meet a young couple (Casey Affleck and Rooney Mara), presumably husband and wife, whose sleeping is disturbed by a discordant twang on the keys of an old piano in their living room. Getting up to investigate, they find nothing suspicious or out of the ordinary, and they go back to bed.

The camera then holds an overhead, close-up shot of the couple for several long minutes, lingering as they embrace, motionless, in the silence. Nothing more happens, but it makes you feel like a voyeur—or maybe like someone else, or something else, is also watching.

In the very next scene, the husband is dead, killed in an automobile accident. At the hospital, after the wife has viewed his lifeless body, he sits up from the slab in the morgue. Still covered in a white sheet, now with two mournful-looking eye holes, he slowly makes his way out of the hospital and heads back to the house that was his home.

This certainly could have been played for yuks, but writer-director David Lowery (who also directed Disney’s 2016 live-action remake of Pete’s Dragon) has something else in mind—a meditative, existential reflection on memory, life, loss, longing, loneliness and legacy.

Back at his home, the ghost silently watches his wife come and go. He tries—unsuccessfully—to “reach out” and touch her. But she is unaware of his presence. When she comes home from a date with another man, the ghost has a jealous poltergeist moment—light bulbs burst and books fly off the shelf. (One of the books opens to a page of the Virginia Woolf short story “A Haunted House,” quoted at the beginning of the film.)

One day the ghost looks out and sees another ghost, through a window in the house next door. They wave to each other, then communicate via subtitled ghost telepathy. “I’m waiting for someone,” says the other ghost. “Who?” asks the Casey Affleck ghost. “I don’t remember,” says the next-door ghost.

If you stay through the end credits, you’ll find out the next-door ghost (who has a floral-pattern bedsheet) is played by certain singing pop star (credited as “Spirit Girl”). Watch closely and you’ll catch a glimpse of her, without the bedsheet, in a party scene later.

Eventually the wife moves out and moves away. Other people move in. But the ghost stays. Time flows, forward and backward. The past, present and future begin to swirl and spin, like the planets around the stars—but the ghost remains in one place, the spot where his home was…or someday will be. 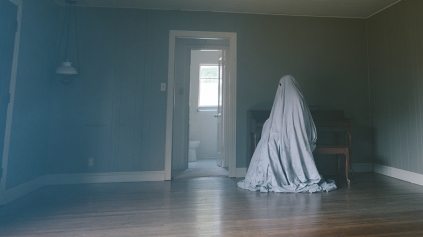 Affleck and Mara’s characters are never named, but in the credits they are identified as “C” and “M.” Of course, C is for Casey and M is for Mara. But coincidentally, C is also the Roman numeral for 100 and M is for 1,000—and in this movie, those quantities could easily signify years.

M says in the very first scene that she’s moved around a lot in her life, and she always wrote little notes wherever she lived and stashed them away in the nooks and crannies of her houses. “If I ever wanted to go back,” she says, “there’d be a piece of me waiting.”

Those little notes play a big part of the story. So does the idea of going back, especially in a metaphysical sense, and what kind of “little pieces” we leave behind—whether it’s Beethoven writing a symphony or a pioneer driving a stake for a homestead cabin.

There’s a lot to think about in this mesmerizing, slow-go, low-budget minimalist movie with very little dialogue—although the slam-bang Transformers multiplex crowd might find its lack of action and pyrotechnics downright maddening. As unique and hypnotic as it is, a nine-minute sequence of Rooney Mara sitting on the kitchen floor binge-eating an entire pie isn’t exactly Mark Wahlberg fighting a giant robot—I certainly can’t argue with that.

But with Oscar-winner Casey Affleck underneath a form-fitting sheet, and mute, for almost 90 minutes, A Ghost Story is unlike anything else you’ve ever seen. A beautiful, haunting ode to the impermanence of everything—and the precious, mundane, sometimes mysterious moments that make up the music of life—it reminds us that we’re all just watching it go by, one way or another, and that it will continue, in some shape, form or fashion, long after we’re gone.